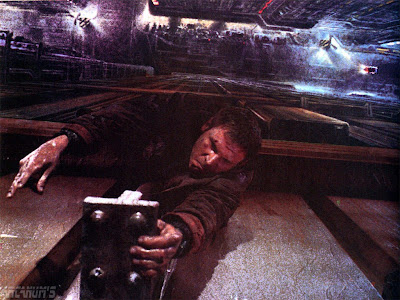 In an ironic twist of fate, today I'm actually writing about something someone posted on i09.com, specifically, this heavily-researched and annotated post dissecting Blade Runner's ending as it appears in several different versions of the script, including a new draft by Hampton Fancher recently unearthed (or manufactured) by Keebler nerds working deep underground.

First they present an excerpt from Fancher's July 24, 1980 draft:

"Roy Batty dies. (And instead of that awesome speech, his last line is, "Crap.") Deckard drags himself to his car and goes home to find Rachael. They get in Deckard's car and drive out to the countryside, while Deckard's voiceover talks about how they had a lovely day and he taught her a song about monkeys and elephants. And then Deckard takes her out in the snow and shoots her in the head. If he hadn't done it himself, they would have done it, his voice-over explains. But now Deckard can't go back to the city, and he's no longer sure what's really real. Maybe nothing is. He drives off. The end." 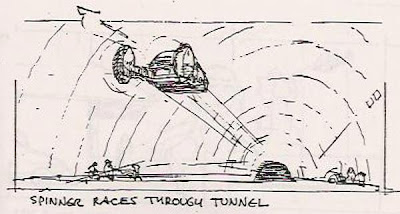 Then another excerpt from the December 22, 1980 draft:

It's the day after Deckard kills Batty, and he's in his apartment with Rachael. Bryant shows up at Deckard's apartment, and they talk on Deckard's vidphone. But Deckard won't let Bryant in. Deckard insists he's alone, but Bryant can tell Deckard is lying. Bryant warns Deckard that Gaff is ambitious. There are long pauses while Deckard tries to figure out what Bryant means, and then he gets it. Deckard finds Gaff staking out his apartment, and almost shoots Gaff. But Deckard says (in a voice-over!) that he's tired of pulling triggers. So instead Rachael and he sneak out and go out to the countryside. Rachael makes Deckard pull over because she's never seen snow before. They talk about Roy Batty, and how he made Deckard realize every moment is precious. Rachael says it's the happiest day of her life, then she begs Deckard to shoot her. He does. Then he drives off, realizing it's too late for him to get away. "They wouldn't give me papers for the Colonies even if I wanted them." He wonders who designs "the ones like me." As Deckard stares at the sky, he concludes his voiceover:

The great Tyrrell hadn't designed me, but whoever had, hadn't done so much better. 'You're programmed too,' she told me, and she was right. In my own modest way, I was a combat model. Roy Batty was my late brother.

Then, finally, they present an ending from the February 23, 1981 version:

Deckard and Rachael are in Deckard's apartment. He asks her if she loves him, and if she trusts him, and she says yes. He packs some stuff and they head for the elevator, but he sees a tiny unicorn made of tinfoil: "Gaff's gauntlet." Then Deckard drives through the woods at 160 miles per hour. Deckard and Rachael smile at each other, but a blip flashes on the vidscreen of Deckard's car. Deckard puts the tinfoil unicorn on the dash. Deckard's car zooms through the woods, and he gives us a last voice over:

I knew it on the roof that night. We were brothers, Roy Batty and I! Combat models of the highest order. We had fought in wars not yet dreamed of... in vast nightmares still unnamed. We were the new people... Roy and me and Rachael! We were made for this world. It was ours!

And then the camera pans up above the woods and we see Gaff's spinner, chasing them. The script says: "CREDITS ARE ROLLING, God help us all!" The end.

If you still think Deckard's not an android, perhaps you'd be interested in a bridge I have to sell you.

It's so hard for me to think of Blade Runner this way because the impression the earlier versions left on me. It's intriguing in that people post YouTube parodies of movies with titles like, "How X should have ended", but Blade Runner's ending was momentous, poignant — and, put it this way: "Tears in rain" is a lot more poetic and moving than "Crap"!

"Roy and me and Rachael!" almost makes it sound as if the 3 of them were going to rebel against humans, if Roy wasn't dead, and that's the implication given by the appearance of Gaff's spinner.

Wonderful stuff, thanks very much for sharing it. I'm in the midst of re-reading PKD books I haven't touched in 20+ years, and finding a great deal I hadn't noticed before.

What's so interesting is that in the director's cut, without the VO, the clues were there to support Deckard being a replicant. Gaff's unicorn at the end is the final puzzle piece that should erase all doubts that Deckard's memories are implanted.

Wow, thank God David Peoples was brought in. Those scenes sound awful! As Scott Radtke says, the director's/final cut hint at Deckard being a replicant quite strongly, without the need for the VO to explain it to everyone.

Very interesting post on how the script evolved! Precious memories...

I'll pass on the bridge offer, but I still don't accept that Deckard is unequivocally an android.

There are plenty of clues in the film that Deckard might not be human. But the question still isn't resolved -- the film doesn't provide a clear, unambiguous answer. I don't accept the "Ridley Scott says so" argument. For all of his bloviating on the topic, Scott has had numerous opportunities to insert a definitive answer into the film and has consistently declined to do so. And why should I accept the word of a guy who didn't write the script or the source it's based on as the final word on the subject?

I also think it's a little silly that people are insistent on figuring out what is "true" inside a purely fictional narrative. That's a little like debating the blood type of Huckleberry Finn.

The film has a little ambiguity -- so what? Just accept it.

Don't dismiss Hampton Fancher. The script was a great collaboration (the voiceover was done by another guy entirely).

RE: Deckard being a replicant. The unicorn dream wasn't in the script or the original cut, nor is the idea of him being a replicant a part of the book. More importantly, Deckard's character arc is about a man who is emotionally withdrawn because of his terrible job, and has become almost robotlike in his emotional disengagement. He is ironically made human again by an artificial life form. What could be more poetic? For him to have been a replicant ruins this simple, beautiful truth and powerful theme that the story gives us.