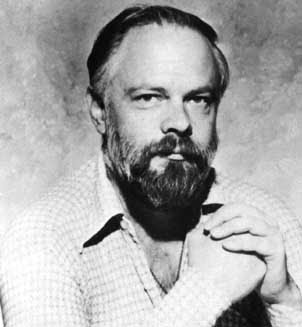 "If you're a Philip K. Dick fan, and even if you're not, the best way to start reading Christopher Miller's second novel, "The Cardboard Universe: A Guide to the World of Phoebus K. Dank" (Harper Perennial: 522 pp., $14.99 paper), might be to open the thing at random and plunge right in. (Arranged alphabetically, generously and whimsically cross-referenced, it invites leapfrogging and courts the infinite.) At first blush, the frontmatter feels too cute, a little fussy, as if Miller is trying too hard to make his Dank -- a shlubby science fiction writer who shares a biographical outline (shifted a few decades forward) and aesthetic with Dick -- into a one-note joke about Dick's life and art."

Then we get a section from the novel:

"All his life he attached a portentous importance to the fact that 'Dank' means 'thank' in German. He gave the author-figures in his fiction idiotic names like Sol Grateful, Solar Thanx, and Sunny Thanker (since of course -- and this too was supposed to be Significant -- Phoebus is the sun god). He liked to say that his entire oeuvre was just a way to thank his lucky star -- the one he happened to find himself in orbit around -- for enabling intelligent life. In our Oakland days . . . Dank affected to pronounce his name the German way, so that it rhymed with 'wonk' and not with 'crank,' but he failed to persuade the rest of us to follow suit."

Park sums it up:

"It's an impressive feat, but any review of "The Cardboard Universe" should end by emphasizing how gaspingly, even spittle-coaxingly funny it is. Whether it's the sympathetic Boswell or grumpy Hirt writing, the descriptions of Dank's works -- short stories, novels, even a strange cyber pen-pal project -- are pure pleasure. Miller hits just the right note, somewhere between so-bad-it's-good and I-could-see-this-as-a-movie, often seemingly generated by a knee-jerk play on words."

What do you think? I won't get to read it until mid-May. Think this'll be any good, or will it be, as one commenter called it, po-mo wang dangling? Frankly, I'm a little creeped out by the book's subtitle, as I have a folder on my computer's desktop containing a half-completed pitch letter for a book titled "A Guide to the Worlds of Philip K Dick."
Posted by Ragle Gumm at 7:49 PM

It's going to be the first book I download onto my Kindle when I finally get it. We'll see. Part of my dislikes the idea of making fun of Phil, and part of me thinks Phil would have loved it. After all, you don't parody someone who's no one -- this is actually high flattery, whether meant to be or not.