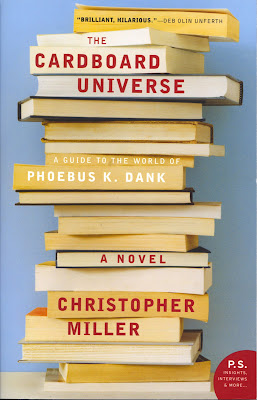 Loyal reader Robert Cook tells of his discovery of the book (which I had not heard of):

I was browsing in a couple of downtown (Manhattan) bookstores this evening after work, one of them being The Strand, well-known not just for its "miles of books" but for the various writers and musicians who have toiled there before achieving greater or lesser renown...Anyway, upstairs on their "new fiction" table I found THIS, (see attached jpgs), the title of which seemed...intriguing, to say the least. You'll see what I mean once you've read the subtitle. I read the first few pages and it seems like it may potentially be quite wonderful so I picked it up. I'm hopeful, anyway.

Here's the review from Publisher's Monthly:

Miller's follow-up to Sudden Noises from Inanimate Objects once again experiments with narrative, exploring the life and death of prolific science fiction novelist Phoebus K. Dank through a definitive encyclopedia of the author's work; the commentators—one sycophantic, one antagonistic—devote as much space writing about themselves as they spend on their subject. Dank, based loosely on Philip K. Dick, wrote scores of novels involving secret Martians, twins and doppelgängers, enhanced or diminished senses, and near-futures in which global warming and new viruses lead mankind in drastic new directions. Unlike Dick (who features in one of Dank's alternate universe tales), Dank is an extraordinary hack (though one of his commentators would violently disagree). The book is clever and often very funny, and the murder mystery at its heart is more complex than it first appears. A near total lack of dialogue, though, creates a feeling of endless description, and the structure lends itself to momentum-crippling padding. This novel should prove a delight, though, to science fiction fans with a sense of humor about their genre.

Make sure to click on the image below and read the back of the book: 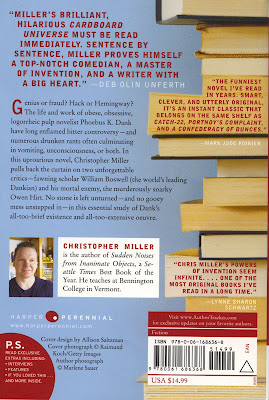 Looks like I'll spend another part of my summer vacation missing out on rereading PKD books in order to read a book that's sorta about PKD.
Posted by Ragle Gumm at 12:21 AM

Sounds like pomo wang-dangling to me. Give me something stupid and direct to something too clever for its own good any day.