Mindblower of the Day 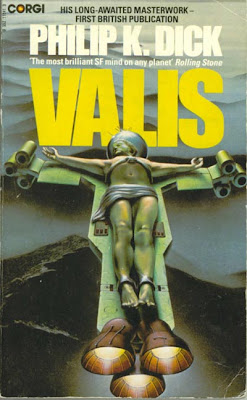 Any PKD fan worth his salt knows that the character Horselover Fat in PKD's VALIS is a transposition of Philip Dick, as Philip means 'lover of horses' in Greek, and the word 'dick' means 'fat' in German. But did you catch this one:

Scholar Robert Galbreath suggested in a 1982 essay in Science-Fiction Dialogues edited by Gary K. Wolfe that the characters Kevin and David (commonly thought of as pseudonyms for PKD's real-life friends KW Jeter and Tim Powers), may represent other aspects of Horselover's fragmented personality. After all, taken together, the first initial of characters Phil, Kevin, and David, create the acronym PKD.

Interesting to note that there seems to be some sense of reintegration of the Horselover personality into Phil's at the end of VALIS, but if this naming convention is indeed intentional (it certainly explains changing Tim's first name but not Jeter's) then PKD (as the author) may be suggesting that the faithful and the skeptic are not intergrated as one.

I stumbled onto this discovery during an email exchange between PKD scholars Umberto Rossi and Andrew Butler - Thanks guys! I never would have thought of that - and it's so damn obvious!
Posted by Ragle Gumm at 10:55 PM

It's not impossible to read VALIS under a solipsistic point of view. Borges played once with the idea of an "idealistic" novel "where all characters merge into one". Solipsism, Borges and Berkeley's idealism are, as we all know, present in PKD's philosophical ideas. In fact, the little daughter of the rockstar Mother Goose, could also be as well a part of Phil/Fat as Kevin or David. In fact, every character of the novel (I know this is a very radical hypotesis) can be understood as facets or parts of Phil's lost unity, a concept that sounds very gnostic to me, a kind of "we are all one mind" philosophy (the alternative metal band Tool's "Lateralus" album, for exemple).

Wow, I've read Valis at least a dozen times at a minimum, and I never thought of that.

i wonder how much of this kind of stuff was a conscience plan. it could be a very psychological embedded facet to this and other stories by PKD and other authors. that still doesn't take away from the find and or the amazing synchronicity of it. very interesting.

I don't buy it. Of course it's an interesting thought and everything, but it's the kind of clever interpretation that PKD complained about: critics explaining away the literary meaning of the work. VALIS can't be understood outside the context of the conversations with friends that were such an important part of the research process for Phil during the pink light events. A look at his letters from the period demonstrates how important interactions with his friends were to Phil. He toyed with a lot of weird ideas but he was no solipsist.