Lost in A Maze of Death 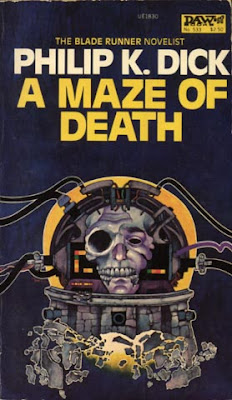 Something's rotten in the state of Delmak-0! Colonists are dropping like flies, inscriptions on buildings are changing, tiny model buildings (made on Earth) are shooting at people! It's crazy. What can I say? I have some theories about what's happening, but they're not very good.

Here are some things I'm paying attention to:

Numerous references to the egocentricity of the group. This is borne out not just by the doctor's psychological profiling before Ted and Morely arrive, but by the anguished inner dialog of the characters:

""I don't agree," Frazer said. "My preliminary testing indicates that by and large this is an inherently ego-oriented group. As a whole, Morley, they show what appears to be an innate tendency to avoid responsibility. It's hard for me to see why some of them were chosen.""

"Why aren't I in there? [Morely] asked himself. Functioning as part of the group. But the group didn't function as a group anyhow; it was always a finite number of self-oriented individuals squalling with one another. With such a bunch he felt as if he had no roots, no common source."

I think this repeated theme is significant -- especially in light of the building's inscription which seems to each person to indicate that they alone should enter. Anyone else entering the building would be killed, defeated, etc.

Please note, that although it has nothing to do with the story (so far at least) the cover of this DAW edition is awesome!

As I would say to my class, "Let's explore some of the imagery." In the comments, talk about what images are jumping out at you, what interpretations you've developed, details you think are relevant etc.. I'll get you started: How about Betty Jo Berm's suicide/murder by malaise?:

Reminds me of Ludwig Binswanger. Read this, then you'll know:

“Loneliness is an unhappy compound of having lost one's point of reference, of suffering the fate of individual and collective discontinuity and of living through or dying from a crisis of identity to the point of alienation of one's self.”

REMEMBER NO SPOILERS! (I've read through chapter 10)
Posted by Ragle Gumm at 11:06 PM

Just a note of appreciation for these summer reading posts. They are just what us PKD readers need, both an antidote to all the biographical bullshit (drug crazed loony PKD &c), and a guide to how to tackle some of his huge SF output. Thanks.

You picked one of the few I don't own. Nertz.

Thanks for doing this - I came across it via my friend the invalid (http://theinvalid.tumblr.com/).

I've only read the obvious pkd stuff before - valis, do androids dream ..., a scanner darkly. What I'd forgotten is how weird his books are. There's something not right about his worlds that's really interesting in a way that I can't quite put my finger on. Even compared to other sf/fantasy writers, I mean. Perhaps it's the way the characters mis-communicate with each other - something obviously foregrounded here. Probably it's just a result of the determinedly non-naturalistic style.

Anyway, it's really taken off in these last couple of chapters, and there's loads of intriguing threads dangling, not least who/what is ned russell?

I read it a couple of months ago, so I'm trying to reconstruct my thoughts without spoiling the story.

By this point I was also heavily focussed on how they were all so heavily engaged in their private worlds. The scene with the mysterious building and the different words that appeared to each of them seemed to bear this out. I'd quite enjoyed those earlier scenes when they meet each other and engage in a confused babble - less like a conversation than a whole bunch of unending monologues. It seemed like the individual/group thing was the main direction of the novel.

As for imagery, I liked Betty Jo Berm's analogy of pill taking as allowing her to "burn better", as if existence is a flame and the drugs are the fuel. Her feeling that they allow her a deeper insight into reality is interesting too. I would contrast the metaphor of life as flame, and a life lived closer to the centre of reality (according to both Gnosticism and Specktowsky's "theory of concentric circles of widening emanation") as burning brighter, with her death in the river, her flame doused by the water. That seems a powerful image to me.

Chapter 9 is filled with imagery...in the minds of all who read the building's words.
Specifically, the STOPPERY and the HIPPERY HOPPERY.

You see how sick Wade is by the following:

They -- the mentally ill who come here -- are not returned to society, they are quietly and painlessly put to sleep. Which, ultimately, must be the fate for all who are incurably sick. Their poisons must not continue to contaminate the galaxy...

Even more disturbing are the thoughts of Ignatz:

Maybe, he thought, they have fat asses, people like Babble, making it with big dogs. I'd like to see some of these fatassed people in there plugging away; I'd like to see that Walsh plugged by a Great Dane for once in her life. She'd probably love that. That's what she really wants out of life; she probably dreams about it.


I stopped after chapter 10, but I'm really curious about this Ely Nichols character...might have to knock out a few more chapters before bed.

Deep_Neutral, I know exactly what you mean, about the incongruity of pkd's worlds. They just don't fit together. I never know whether that is intentional or a result of somewhat mixed-up ideas. In Maze, it seems entirely appropriate that things aren't fitting together, because the characters all seem quite alienated and incapable of communication. They all percieve completely different things from the same object(Wittery/Winery etc.), and there are characters like Tony who mistake an old man for the Form Destroyer. As Glen Belsnor observes, it's as if they are all mentally ill.

Anyway, to come back to the point, in Maze the world feeling not quite right is appropriate for its themes, but sometimes it can be frustrating. I guess it's just because a lot of pkd's ideas are so out-there that it can make imagining them all working together difficult.

I love the worlds that Dick creates which seem to be bound together with duct tape and silly putty...and when they come completely undone, that's the greatest.

I also think that he often writes from the viewpoint of a character. If the character seems to be having a mental breakdown, the writing gets more erratic...this gives the reader a greater feeling towards what the characters are experiencing.

I remember noticing this quite a bit while reading The Man in the High Castle, but it's been such a long time that I can't find an exact example of it at this time. I even think you can find this style in his mainstream novels. Like when Stuart Hadley goes through his downwards spiral in Voices From the Street, the pace of the story and writing also seem to become more disturbed.

(These are some of the reasons I love his writing over all other science fiction writers.)

I'd never considered this about PKD's use of free indirect techniques before, but he fits the James Wood model very well.