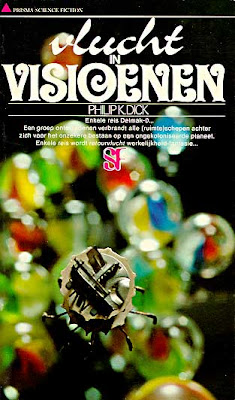 Reading A Maze of Death late last night, I just about lost it when the crew of the raft encountered the gelatinous Tench beside the river. What an amazing scene! For some reason the cryptic written responses provided by the Tench reminded me of an image from the beginning of the novel I haven't been able to shake. Ben Tallchief holds the punch cards encoded with the information about his assignment,:

"Frowning, he studied the coded information, trying to decipher it. In numbers, punch-holes and letters it spelled out his new life, his world to come."

"He could not discover what his job would consist of. The letters, numbers and punch-holes failed to say, or perhaps it was more correct to say that he could not get them to divulge this one piece of information--a piece he would much have wanted."

I don't know why this image stuck with me, but I know why I remembered it when the Tench began responding in cryptic riddles. Wikipedia sorta gets that the Tench answers with particular hexagrams from the I Ching, but there's something more at work. The Tench conceives of language as an object, that's why it can communicate with the colonists only through the same kind the assimilation it uses to duplicate wristwatches. Language isn't information transmitted verbally, but from the Tench's perspective language has form. Isn't it interesting to compare the Tench's responses to the encoded info contained on the punch cards? In both cases the reification of language is literal, and the resulting signal loss obscures the meaning of the communication.

Here are some of the I Ching chapters that coincide with the Tench's responses:

"There are secret forces at work, leading together those who belong together. We must yield to this attraction; then we make no mistakes"

"Often a man feels an urge to unite with others, but the individuals around him have already formed themselves into a group, so that he remains isolated. He should then ally himself with a man who stands nearer to the center of the group and can help him gain admission to the closed circle"

"Every step, forward or backward, leads into danger. Escape is out of the question. The danger comes because one is too ambitious."

Notice that both the encoded information on Ben's punch-card and the Tench's prophesies concern future events. I think it's important to pay attention to how texts are working in Dick's novels. Here, we see two examples where the future seems to be laid out, set in stone, beforehand, but even so, this future is inaccessible and therefore unknowable.
Posted by Ragle Gumm at 6:12 PM

Great post. This is what PKD blogging is all about.

I'm struck by what you've discussed here as some key elements of what Terence McKenna found inspiring in PKD. TM's weird theoretical musings on media theory and visual language owe a great deal to this kind of thing in PKD, I think. I'm not sure he would have tried to use the I Ching to figure out the structure of time without having first read and "understood" PKD.

I kind of think that that book cover (with the head in the machine) gives the ending away. It didn't ruin it for me or anything, but it does give a big hint.
Anyway, I just finished Maze of Death, and I guess I'm a little slow, but there's a lot of stuff I haven't figured out. What's the significance of the Intercessor existing outside of the polyencephalic world? and why did Mary return to Delmak-O?
I have the feeling I've missed out on the last-page twist...

Completely separate question, but I'm just wondering why many people seem to value the I Ching's answers? Surely, it is all completely arbitrary; just a more complex version of flipping a coin to tell you what to do. Obviously, I'm not disregarding the fact that intelligent people like PKD valued it, but how can it possibly work?

The reviews on that site are generally not very well-written, but this one does offer some interesting criticisms.

I agree about the attititude to women and sex in the novel. I also had the same reaction when the twist was first revealed. "No, not another 'it was all a dream'" But it ended up to be more than just that. I thought it was interesting how everyone preferred murdering each other to just being bored!

The end Walker...how very Dickian. Kinda makes you wonder which part of the made-up world was also part of the real world.

I have some ideas on the chapter names in the beginning of the book, but didn't really figure them out until reading chapter 15.

My first idea was that these chapter titles would have been more accurate in their various other trips into the polyencephalic state. So, in a past trip, in what would have been chapter 4, Mary would have discovered she was pregnant. Even a further stretch would be to link their aquatic adventure as dolphins with the title of chapter 8: Glen Belsnor ignores the warnings of his parents and embarks on a bold sea adventure. But, most likely I'm just forcing that one to fit into my theory.

My second idea is that these are parts of their "manufactured recall-datum", just little bits and pieces that each person has stuck in their memories somewhere, specifically for this trip to Delmak-O.

I also don't know if there is any significance to Tallchief and Seth being mentioned twice...

There is a faint similarity between this book and the movie, "Event Horizon". It's not a very good movie, but once they were back in the ship, I couldn't help but thinking of it. In the movie, the crew is stuck on a long voyage, and they end up killing each other...while being possessed by some hellish force (Form Destroyer?). And then, after the ship (the world around them) is destroyed, the main character (can't think of the character's name, but he's played by Sam Neil) "wakes up" from a nightmare while in a sleep designed for deep space voyages. The end of the book also is very similar; while Mary finds out she's being sent [back] to Delmak-O, in the movie there seems to be evil forces started to interfere with the crew all over again...this all suggests some sort of hellish, unending cycle. If you haven't seen it, it's probably worth the watch just to see the similarities...but as I said, it's not that great of a movie by itself.

Did your edition have the Author's Note? Mine began with a one-page Author's Note that confirmed that the Tench's responses came from the I Ching, and also explained several other theological concepts used in the book as to their real-life origin. At first I thought the note contained spoilers and was a little bothered by it, but when I got to the end of the book I realized it hadn't actually spoiled anything.

Thank you!!! "Maze Of Death" is my favorite book of all time and i think it's very underrated.

Phil intended for the titles to have nothing to do with the book. He got them from soap operas.
~~~

i also think this is a very underrated book. its one of my favorites as well. it has a lot of elements that are very dickian. i think there are a lot of hidden meanings in the book that are tied to religion. imo it seems like a tale of faith.
anyway, the i ching can seem very arbitrary but its actually a way of 'divination' by allowing you to reset neural pathways and sift through information making connections in unknowable or unlikely situations. the difference between the i ching and western divination techniques are most western teq.(ie the tarot) have very fatalistic outcomes. they are tied to instances of fate. the i ching allow the user to make decisions based on their own wisdom, knowledge and experience.

the I Ching (Book of Changes) is not so much arbitrary as random. Carl Jung explained how it taps the unconscious mind in his introduction to the Wilhelm/Baynes translation.

I was blown away by the Tench--such a nice surprise in a novel that had already established itself fully. It's one of the most interesting input-output parables in PKD and I love the suspense that builds before we find out various explanations of what it was "made up of." It reminds me the most immediately of the reality tape in The Electric Ant. I love the crazy logic of the decision to try asking it to copy words. It has so much potential as an esoteric allegory that one could write a book of exegesis on this single monster.

Anyone else's thoughts about the full-page group conversations repeated almost identically towards the beginning of the book (after Ben's arrival and Seth's arrival). It first came across to me as some major oversight on the editor's part, as if the conversations were different drafts of the same conversation and Phil hadn't fully rewritten the second, but of course it became clear that that was too glaring an oversight. Still, very (intentionally) awkward and an early indication that the story takes place in a synthesized, holographic, or laminated environment.