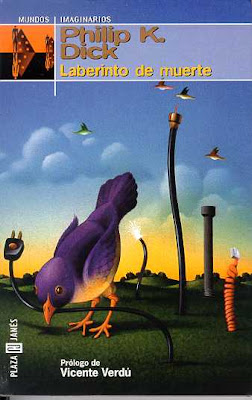 I finished the novel over the weekend, and just in the nick of time. Classes start tomorrow.

Oh man, it was just a big simulation in their brains! "This is a huge oversimplification, but you can think of it as The Matrix times a million!" But, I gotta say, I wasn't disappointed with the ending. However, I think if you tried to adapt the movie to the screen now, with the ending intact, you'd have audiences rioting in the aisles, hurling Jujyfruits at the screen.

I had a sneaking suspicion that Delmak-O was going to be an illusory world. In fact I kept remembering this quote where PKD lists all of his 'solipsistic novels' (that's a term I use to describe his stories in which a reality turns out to be contained in someone's head). It's from the Exegesis:

"Eye," "Joint," "3 Stigmata," "Ubik," & "Maze" are the same novel written over and over again. The characters are out cold & lying around together on the floor.* (*Mass hallucinating a world.) Why have I written this at least 5 times? [...] What's to be gotten over is the false idea that a hallucination is a private matter. Not hallucination but joint hallucination is my topic, inc[luding] false memories" (Sutin, Divine Invasions 95-96)

I couldn't remember if Maze was on that list and I didn't want to look and ruin the ending. What's interesting to me about the ending is that it opens outward. PKD spends two chapters connecting the hallucinated world with the 'real world' aboard the spaceship. This is certainly an area for further research and discussion in the comments section.

Another thing I liked about the ending is how depressing it is - especially my reading of the ending: you see we're all on a pointless journey to nowhere. Maybe some of us will see more interesting territory on the way, or blaze a better trail in our wake, but the end is pretty bleak, and so, in a way, all of us (and a certain underrated science fiction writer) are members of this crew, cast adrift in purposelessness. This is where that initial tension between technology and faith returns to complicate matters - like Beethoven, Dick can build endlessly upon a theme. People of faith, like Seth Morely, can achieve some kind of salvation (if you believe he actually left the ship - raise your hands, how many think so?), but for the rest of the group technology (their spaceship) has failed them, they are stranded, thrown into an unfair drudgery that ends only when they die. This is what the existential psychologists that Dick was into thought about our lives. They must have been fun at parties.

But back to that faith/technology thing. Near the end of the novel, Dick dissipates the tension between technology/science and faith/prayer that he so brilliantly developed earlier in the novel. At the beginning of Chapter 15 it's clear that all the experiences of the characters can be explained technologically: their reality is simulated by an advanced computer system. Even Seth's memory of his encounter with the Walker on Earth before departing for Delmak-0 was part of the illusion. A SF writer like Asimov would leave a science fiction story in this place - with a plausible, materialistic explanation rather than a supernatural one. But Dick reignites the tension and cranks it up when we see Seth talk to the Walker-on-Earth and the Walker leads Seth off the ship and to a better reincarnation.

Commenter giospurs wondered after the last post: "What's the significance of the Intercessor existing outside of the polyencephalic world?" which brings up an interesting connection to Do Androids Dream of Electric Sheep? which was written pretty close to the time of A Maze of Death. In DADOES? you see Wilbur Mercer, this semi-real religious figure who helps Deckard out in his time of need. When I teach DADOES? one of the most frequently asked questions is "is Wilbur Mercer real?" and the response is a frustrating, 'yes, and, no.' For while something clearly happens to Deckard when he meets Mercer, there is no explanation for his appearance (or Deckard's wounds), at least no explanation that doesn't involve something supernatural. I guess I'm getting around to answering giospur's question by saying that if the Walker on Earth appears at the end, and saves Seth, doesn't that imply that the Walker was created by Seth's belief? After all, the Walker was created by the computer as a religious figure, an assemblage of savior archetypes that had no corporeal form outside the computer.

In these two novels it seems like if someone has enough faith, their faith can literally be 'embodied,' personified, but the manifestation requires faith . Deckard and Morely must believe - or be so bad off they're willing to believe anything for some simple relief. This faith, of course, compromises their objectivity which introduces doubt. The weaving of faith and technology in the these novels (Mercer uses a TV-like box to connect with his followers) makes it almost impossible to untangle these supposedly mutually exclusive world views at each novel's end.

As for the chapter headings: I think these are summaries of what the participants thought they would be seeing and doing in their planned polyencephalic world, but that their world didn't pan out as expected, not through the fault of technology, but because the characters themselves act out, in the polyencephalic world, their worst fear they have about their lives on the ship: that they will slip into private worlds of insanity. I love this bit:

"We could have survived the twenty years, Seth Morley said to himself, Knowing it would end; that would have kept us sane and alive. But the accident had come and now they circled, forever, a dead star. Their transmitter, because of the accident, functioned no longer, and so an escape toy, typical of those generally used in long, interstellar flights, had become the support for their sanity.
That's what really worries us, Morley realized. The dread that one by one we will slip into psychosis, leaving the others even more alone. More isolated from man and everything associated with man" (174)

This is a deep novel, and I think I still have a bit more to say about it. But this post is long enough. I'll pass this to you for more discussion in the comments section.
Posted by Ragle Gumm at 11:03 PM

f you've not listened to it before, I can recommend Future Boy's A Maze Of Death musical adaptation.

Have you noticed the thematic similarities between MoD and LOST?

yep. but i don't think its intentional. i think its what happens when you slip through or let the veil drop. when you start to see whats going on around you and have a more meta view i think you come to a holographic kind of look(viewpoint) at the universe.
http://www.theatlantic.com/issues/88apr/wright.htm
this book is why i love PKD. it starts out kind of pulpy, olmost old school scifi then halfway through throws you and the end, wham! it may seem depressing but i think its great. its kind of a great equalizer with a very finalized ending. but does seth really exist outside of the simulation? not so final.

Anonymous, what an interesting thought! What if there is no Seth Morely outside the polyencephalic world? What if he was part of the illusion designed to give hope to the people that were really stuck on the stranded space ship? I'd have to read it again to see if that interpretation works, but that is an absolutely fascinating wrinkle I hadn't hit on.

Yes..! It was all a dream... A dream made possible, enhanced, & personified with the help of technology. So, at the end of Maze we are confronted with technology/the real vs. faith/the non-real or supernatural. How the individual reader navigates this terrain is what (i think) the whole book set us up for. I didn't find the ending depressing at all... Mostly because I never really empathized with any of the characters. Morely is no Deckard... Beyond that, I think our moderator (Raggle Gumm) is right on in his Dick/Beethoven comparison. Mozart might be more accurate tho; in that, Mozart wrote at least 41 symphonies (some say as many as 68), while Beethoven (it's generally accepted) wrote only 9. On that note, my e-version (thankfully!) contains the authors forward, where (among other things), PKD says, "All material concerning Wotan and the death of the gods is based on Richard Wagner's version of 'Der Ring des Nibelungen' ". And; strangely, I don't remember the Wotan at all, nor could I even begin to decipher their significance in the novel.

Phil often used the "it was all a dream" ending, but he gave it a new twist that made it seem fresher, not so stale

Seth Morley is Enoch, who walked with God and then was no more because God took him

the thing that, for me, saves the ending from being a mere "it was all a dream" is that what happens to Seth Morley shows that there is no bottom-level reality being depicted that we can be sure of. The "divine invasion" that takes place is an original vehicle for the uncertainty, and it's a masterful example of the literary form that PKD gives to his religious experience/ideas. I was impressed by the depth of the questioning of religious comforts that Dick brings to the table in this, one of his greatest theological novels. I think a big part of his success is that he's able to keep the "made up" religion nevertheless full of mystery.