My First Look At Radio Free Albemuth - The Movie 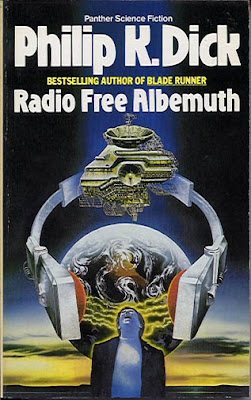 About a month ago I had the opportunity to drive down to LA to see a screening of Radio Free Albemuth with director John Alan Simon. Pretty cool, I know. John wanted me to take a look at the current cut of the film before any further changes are 'locked out' and they begin the painstaking work of mixing and cleaning up the sound, correcting the color-timing, tweaking the special effects, and putting on the final polish.

I really enjoyed the movie and think most Dick-heads are also going to like this film 1) it's an independent release, so it's free of dodgy chairs, high-speed chases, fight scenes, gun battles or Keanu, Tom, Nick, Arnold, or any other Scientologist; 2) and best of all, it's very true to the book. While writer/director John Alan Simon was forced to cut some of the material from the novel, I think he did so in a very effective and sensitive way. 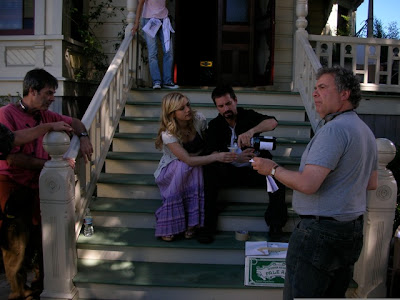 Above: Director John Simon with Katharyn Winnick playing Rachel, and Shea Wigham, filming of one of my favorite scenes.

Although most of the autobiographical material about Philip K Dick as a young child has been excised, John still manages to get us to care about these characters pretty quickly. John mentioned that he kept the 1982 director Ivan Passer's film Cutter's Way in mind while writing the script and shooting the film. Having never seen it, I rented it last week, loved it, and instantly saw its influence in Radio Free Albemuth. Both are loving portrayals of counter-culture heroes whose personal moral codes triumph over The Man - though at a supremely high price. 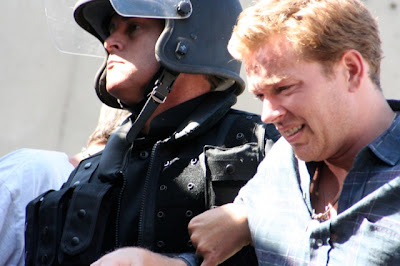 Above: Jonathan Scarfe who plays Nick Brady pays the price.

If you remember, John Alan Simon filmed this movie on a modest budget with private financing in a fast 27 days, using the high-end digital Viperstream camera system which David Fincher used for The Curious Case of Benjamin Button, and Zodiac. and Michael Mann used for Collateral. Currently, Simon is deep in post-production. What I saw was a version very close to the final edit of the film but in much lower resolution image quality than the final film will be. The lighting, sound effects, and musical score were still at a pretty early stage, so I had to use my imagination during some points. The film had a very 'indie' look to it, kinda like Cutter's Way.

Like I said, I think Dick-heads will like this film. It's really interesting how Simon positions the film in an alternate world through the clever use of dialog and scenery. Try as you might, you cannot locate this film in time. Also there are a few establishing shots that seem to encompass several of the book's themes in their composition; one of my favorites was a shot of a palm tree with barbed wire strung in loops before it.

Aside from Alanis Morrisette, who turns in a good performance as Silvia, the actors in RFA are relatively unknown. I thought the guy playing Phil , Shea Wigham, is really good. I think he's the first person to play PKD, and my only complaint is that when he appears onscreen writing, I wanted to yell, 'Type faster!' 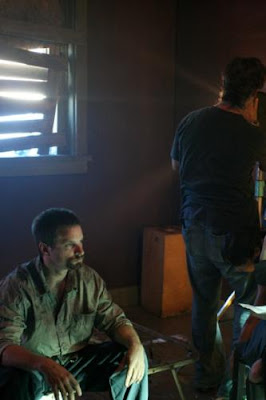 Above: Shea Wigham as Phil.

As always, there will be some armchair quarterbacking going on afterwords, but John Alan Simon has made a very gutsy PKD adaptation. He has bravely filmed the novel's many visions and dream sequences, which, I'm sure, was no easy feat, and explains why the film has taken somewhat longer than usual in post production due to creating complicated digital effects on an "indie" budget. I felt like this movie is a labor of love, a tribute to Phil from a screenwriter and director who really gets him, not one who simply sees Hollywood gold in adapting his stories. You have to respect that.

Stay tuned for a forthcoming interview with John Alan Simon when we'll learn more about the production, and when we can expect to see the film in theaters.

More production photos can be found here.
Posted by Ragle Gumm at 2:11 PM

Wow! Very exciting to hear the movie is actually this close to completion. I'll have to reread RFA soon so I'll have it fresh in my mind when I see the movie. (I haven't read it since it was first published.)

Is someone supposed to be filming VALIS?

How was the music? I heard that Robyn Hitchcock was doing it...

cool. this looks amazing. RFA of all novels deserves such a faithful treatment.

I'm excited by your review...I felt it was important the movie was faithful to the story, so at this point the anticipation just grows on.

Robert, I think Simon's company also has the rights to film VALIS...but I'm not 100% sure, just think I remember reading something like that (but can't find it now). To be 100% honest, I'm not sure if VALIS will be as easy to transport to film. Although a fantastic work, some things should just be left alone. However, Divine Invasion would be much easier to move to film...if looking for another VALIS story.

But the possibility of Simon also doing Flow My Tears... would be [to me] much more exciting than doing the other 3 VALIS novels.

I believe that they are considering calling this movie VALIS as oppossed to Radio Free Albemuth, someone thinks it will make a better movie title! I heard that the idea was to then film the novel VALIS and call the theatrical version VALIS 2. Personally I think they should stick with the original book titles.

anonymous, i think you better stop believing everything you read and hear.

Even when it comes direct from the movie makers themselves? It's in this interview http://www.geocities.com/SoHo/Nook/3661/dick/interv.htm

At one point, nearly ten years ago, consideration was given to calling Radio Free Albemuth by the title that Philip K. Dick himself had given the novel - VALISYSTEM "A".

Dick never chose the title Radio Free Albemuth. The book was published after his death and re-titled to avoid confusion with VALIS, which by then had already been published.

It seems possible, maybe even likely, that had the first novel been published as VALISYSTEM "A" - that the second novel, VALIS - might have been entitled by PKD as VALISYSTEM "B".

So that was under consideration at one point - or simply calling Radio Free Albemuth - VALIS "A" and if VALIS were later filmed as the interconnected "movie" within a movie - than calling the second movie "VALIS B".

As a major PKD fan, I think this would have been a pretty cool idea.

In fairness it should be pointed out that others believe that VALIS was simply his "re-write" of the abandoned Radio Free Albemuth and therefore there never would have been a second (i.e. first ) version published had PKD lived. The facts and recollections of those around at the time are not conclusive.

It is clear that PKD wanted Radio Free Albemuth published when he was alive - and as far as I know, really no reason to think he wouldn't have wanted it published later, even after the publication of VALIS.

When a distributor becomes involved in planning the release of Radio Free Albemuth , it's possible - but not likely - that either of these ideas might be re-visited. Distributors have a great deal to say about what title a film is marketed under.

All these various scenarios of PKD alive/dead - Radio Free published first/published second. VALIS never having been written at all, if VALISYSTEM A had been published - nice to think of them all playing out in various alternate realities somewhere.

I truly hope this movie is completed at some point. Being as it wrapped in october 2007 i would have imagined they would have been finished with 'post' long long ago. like a year ago.

Need to hear music done by a character of radio free albemuth ?

Only free music for free listeners.

Wow, this looks really cool. I always have liked this novel a little better than VALIS. Excellent news

Nice to see they have good taste in beer as bespoken by the case of my hometown brew, Sierra Nevada Pale Ale, prominently placed in the porch scene. RFA is one of my favorite PKD novels and I have high hopes for the film version, despite being disappointed so many times by PKD-based movies. I think a low-budget aesthetic suits the material more than the jillion-dollar special effects movies have so far demonstrated.

Can't put my finger on why this is one of my favorite books ever, kind of like an alternative version of Vonnegut's version of Christianity as "The Church of Jesus Christ the Kidnapped." Found it in a library sale bin, hadn't been checked out in 3 years. Then I'm funneling gatorade powder into a bottle of water with the Los Angeles Times last week and the flip side of the paper turns out to be this review on my dream PKD novel almost DONE?!? Always saw Erykah Badu as the vocalist but oh well. Like The Road, the best adaptions seem to take forever to release. Can't wait