Stuff From All Over 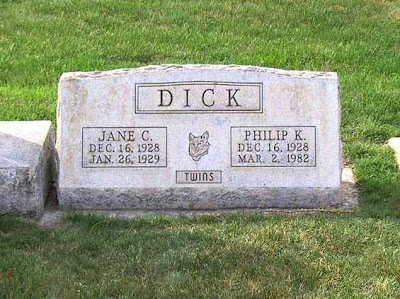 I'm right in the middle of a huge stack of papers to grade, but the PKD-related news stops for no man. Here are a few interesting items.

First, this touching story from the Fort Morgan Times in Colorado about people leaving stuff at Phil's grave. "Toy and stuffed sheep are frequently placed at the tombstone of Philip K. Dick, who was buried at Riverside in spite of his family's wishes because he wanted to be interred next to his twin sister, who died in Fort Morgan in infancy." Except of course, Jane died in Chicago, not Fort Morgan....

Second, a few MP3s of interviews Dick did with Paul Williams have turned up on the web. Nothing new, but perhaps if you've been trying to find these interviews you're now in luck. They're worth listening to. In the interview Dick talks about Robert Heinlein, parenting, Now Wait For Last Year, Mussolini, writing novels, along with some great stuff on Jung, Freud, and Kurt Vonnegut. Interesting error. Phil is totally wrong when he says "Freud never left Vienna."

Finally, in this review of Lethem's new book, Chronic City, which is garnering a lot of attention, the author writes: "Lethem's love of New York, his heartfelt appreciation of the city and its boundless possibilities, enables him to not get lost in the ether in the way that Dick (who, it must be said, was absolutely a child of Los Angeles) almost always did."

Why must that be said? Perhaps because it isn't true, and without at least one person unafraid of error we may never have heard that sentence uttered...?

Now that these are all assembled I notice the common theme is that each article contains at least one substantive error, but such is life.
Posted by Ragle Gumm at 1:49 PM

Those interview links are dead, David - I remember stumbling on them myself a bit ago and wondering why they just lead to bits scanned from the Promethea comic! A pity as the interviews sound great.

When I vistited PKD's grave in 2006 there were small plastic sheep atop the marker, my son wanted to take them (I did not let him). It was very touching. the man at the office said, "Oh, you wanna see that author's grave?" My friend's grandmother was also buried there.

lost in the ether? sounds like somebody who didn't read PKD. PKD was lost in the desert of the real. He was more grounded than most materialists.

So... Has anyone here read Lethem's book?

I've never read any of Lethem's works...honestly, I didn't even know he was an author until after searching him out after seeing his name/intro in the LoA books.

I was walking through Borders the other day, and his Chronic City was on one of the new release tables. Then Amazon sent me a message "suggesting" that I would like this book. Judging by the Amazon reviews, this book has upset a lot of his fans, who feel this is a lesser work than previous ones...then again, I usually give very little credit to Amazon reviews, they're typically trolls.

So, I guess I'm just wondering, from a PKD fan's point of view, how's this book?

(Oh yeah, I'm not from New York either...not that I think that matters, but I guess I wouldn't have this affection that some of these readers have for him, just because he's writing about where they live.)

I wasn't aware this burial spot was "in spite of his family's wishes". Is that true? If so, who specifically wanted something else, what did they want and why?