From Our WTF? Deparment 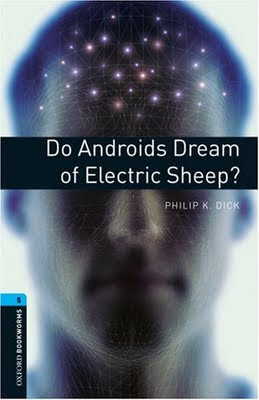 A student of mine recently ordered a copy of Do Androids Dream of Electric Sheep? for class online, and when it arrived he became suspicious, since the page numbers I was assigning didn't match up with the chapter breaks in the book. Turned out the student had mistakenly ordered a 'Oxford Bookworms' edition of the novel (pictured above). After some additional research, I discovered that the Oxford Bookworms Collection takes novels and abridges them both for length and to fit particular reading levels.

All fine and well, of course, (I guess) but Amazon does not make it clear that this is an abridged version, or that it differs in any way from Dick's novel. Bad enough, but then I started reading the Amazon reviews of this edition. It's almost like they'll let anybody write these reviews. Here's a paragraph that I think indicates serious damage has been done to the reviewer's corpus callosum:

"Unfortunately for Isidore, and Deckard too, it's beyond question that androids are in fact incapable of empathy, of identifying with others and comprehending their lives. They abandon each other in danger, torture animals out of curiosity, and sacrifice humans at the merest hint of trouble. (Of course, there are humans who do that, too, and there's something dangerously innocent about PKD's assumption that empathy is a universal human characteristic, but it's his book.) More to the point, although this lack of empathy makes the androids dangerous, it also makes Deckard's job all the more devastating to his conscience once he discovers that, as a human, he has feelings of empathy for the androids. Can he eliminate the android threat and still retain his own humanity?"

Wow, just wow. Of course the androids in the book repeatedly demonstrate the ability to empathize. Furthermore, Deckard is proof that many humans don't possess any ability to be empathetic, unless they are forced to acquire it, painfully, and with great suffering. 'Can he eliminate the android threat and still retain his own humanity?' Is that serious question? Because the answer is that nothing in his human nature demands that he not kill androids. Deckard's morality doesn't evolve out of necessity, or because it's a latent condition of his being, but out of struggle. Deckard's humanity is equally demonstrated in his desire to kill the andys, complete his assignment, and buy himself a nice animal as it is in his final realization that 'electric things have their lives too, paltry as those lives are.' Not only can't this reviewer affix his review to the proper edition of Do Androids Dream of Electric Sheep?, he also appears unable to process moral ambiguity.

At the end of the Bookworks edition there are some reading questions. Check these out (not liable for the desire to poke yourself in the brain with something sharp that these may elicit from you):

This novel has a mysterious title. What do you think it tells you about the story?

What do you remember most at the end - the fake toad or Iran's changed behavior towards Rick? What does that suggest?

Is there any hope at the end of the novel?

The film Blade Runner ends with Rick (who is divorced) and Rachel Rosen deciding to spend whatever is left of their lives together. Do you prefer that ending, or the one in the book?
Posted by Ragle Gumm at 1:52 PM

An abridged version of Androids? JFC, the book is only like 60k words long in the first place! It's probably shorter than most of the books students read "for fun!" That's crazy.

I was about to complain about the abridging, but apparently the Bookworms novels are meant for sub-literate adults wishing to expand their horizons, which is actually pretty great as long as they realize they're reading abridged versions.

"Can he eliminate the android threat and still retain his own humanity?", however, sounds like Deckard gets a morality-affirming lecture by Frank and Joe Hardy about halfway through.

Oh, brother. I think I killed some brain cells just by reading the words 'abridged version.' The review didn't help much either.

can we abridge Androids and retain our humanity?

Have you contacted Amazon about this? If not, I certainly will because it's really unfair to not make it absolutely clear that this is the abridged version. DADOES was the first PKD book I read. If I happened to have read the abrdiged version I might not have enjoyed it as much and may have never became a Dick-head!

Oh, and yeah, that review is quite scary. What does he/she mean in describing PKD's portrayal of human empathy as "dangerously innocent"! This review is dangerously ignorant.

This is so sad, thank you for taking the time to look into it...I can't even begin to understand the metality behind abridging in the first place...but such a slick piece of work as Androids...give me a break.

"sub-literate adults wishing to expand their horizons"...well I would argue that expanding one's horizons is probably best left to Phil, rather than post-humous editing, perhaps they could cultivate patience as well as reading skill.

I tend to feel a bit leery whenever I pick up a book like DADOES, or any other important/classic work, because then I feel worried that I might not be getting the full, original version. Especially if I'm reading online texts.

Well, thanks to Amazon, my paranoia actually has some basis now. Thanks a lot, Amazon.

Hey, there is something weird here. Are the Bookworms for subliterate adults who wish to expand their horizons? Ok, but then why the questions? Those questions smell of classwork or home assignment. Aren't these books instead meant for kids? Or, listen, there is another possibility, they are for non-native speakers of English who wish to improve their reading abilities. Or is this the beginning of Newspeak?

Why people would want to read such abridged books to learn English instead of reading unabridged books of different difficulty levels puzzles me even more than why people read Reader's Digest Condensed Books. I imagine the editing is influenced by desire to fit a book in a particular difficulty/learning level or even different versions for different levels.

Odd -- always found PKD to be at a pretty easy reading level. Quick, easy, fun, thoughful..that's why I'm a dick-head.

Oxford Bookworms are for adults and young-adults who are learning to read in English as a second language. Your bigoted ignorance is so discouraging I think that if I were H. Fat I would have committed suicide by now.

Try to see beyond the extremely narrow limits of your native intelligence (if you can) and recognize that bringing PKD's genius to non-native readers is a good thing.

An abridged version of DADOES is
of no real use for someone who really wants to learn English. It was the first novel I read in English from cover to cover when I was 18 and it was easier than Orwell's 1984 or Bronte's Wuthering Heights...

Also PKD complained in his lifetime about cuts in the translations of his books (in German for MITHC)and I experienced such cuts & changes in early French translations that prompted me to look for the original texts & read them in English!

Just the idea that the first book someone reads in English is one by PKD is quite spectacular.