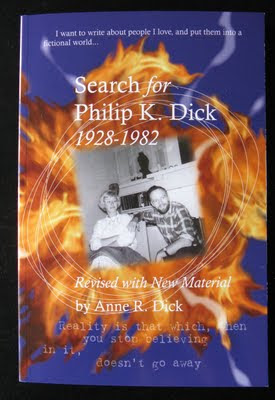 So, as I dig a little deeper into the mystery of the multi-foci novels Dick mentions repeatedly, it just gets more interesting. I emailed Anne Dick and here's her take on the query; remember she was married to Phil when he wrote The Man in the High Castle:

"I never heard Phil mention any Japanese writers, they weren't on the literary scene in the early 60's, but I never heard him talk about Japanese culture either and he certainly had some feeling for it in MIHC. He did read Zen and the Art of Archery once and didn't like it.

Maybe we had a book about Zen koans at one time. I know I read one but I can't remember at what period of my life. I thought it was despues PKD ('after' -- have to keep practicing my Spanish). All that stuff about French writers and Japanese writers sounds like self serving BS to me. Phil needed to enhance his prestige. He felt like he didn't have a good education. Phil's style would be to have a bit of information about a couple of subjects and then creatively connect them in words with his immense intuitive talent for creative theorizing. Sometimes he was right on but sometimes he wasn't. He lamented at least once about the ignorance of the self-educated man and said that's what he was. I may not have put that in my book because I just remembered it.

I think part of his great talent was his imagination and the ability to connect his everyday life to his writing. Also I love his black humor, sociological and political. He certainly had a lot of insight in those areas -- a little like Bill Mahrer but even better. He did follow politics and had followed WW II closely when he was a boy. When he was married to me he talked about Will Durant who wrote a number of histories. Phil owned some of them. I just looked Durant up on Wikipedia. Phil owned two or three volumes of The History of Civilization."

There is a mounting pile of evidence that these authors and novels from Tokyo University may not have had the same import Dick suggests in interviews. It's actually pretty easy to find a number of examples of multi-foci plots written before MITHC: Faulkner's The Sound and the Fury, Eliot's poem "The Waste Land" - even Grace Metalious' Peyton Place. In fact this style of writing is a hallmark of Modernism.

We know PKD was a fantastic self-promoter, could these references be yet more evidence of this? Or an attempt to compensate for his lack of formal education? I'm not ready to render a verdict on any of this, and will investigate further.

Also, Anne knows lots about Dick's influences and writes at length about them in her self-published Memoir, so you should click here and buy it now.
Posted by Ragle Gumm at 4:26 PM

Labels: Multi-Foci Plots, Peyton Place, The Man in the High Castle, Zen and the Art of Archery

"In fact this style of writing is a hallmark of Modernism."

Said it all right there.

I thought "creative theorizing" was a nice touch.

Perhaps PKD was familiar with the Zen writings of D. T. Suzuki and the popular books of Alan Watts in the 1960s. I'm not sure when Watts first began writing on Zen but do know he moved to Big Sur evenntually. And lets not forget that THE TRANSMIGRATION OF TIMMOTHY ARCHER has an Alan Watts-like character (Edgar Barefoot? - I'm going from memory here). And while I'm on this subject I'd like to recommend Watts' autobography IN MY OWN WAY. Cheers - Lord RC