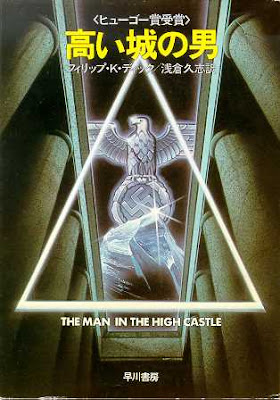 An interesting mystery emerged recently as I was researching Dick's use of multi-foci plots: In two separete interviews eight years apart Dick uses almost the exact same wording to describe where he got the inspiration for The Man in the High Castle's multi-foci plot.

First, Dick talks about multi-foci plots with Paul Williams in 1974, in interviews for the Rolling Stone article printed in Williams' Only Apparently Real.

Williams sets up the interview: "This theme of the relationship between an author and the worlds he creates was also touched on in a conversation a day earlier Oct 30, 1974. We had been talking of Phil's interest in the multicharactered realistic novels produced by students in the French department of Tokyo University after WWII....

D: What fascinated me was the economy of it, same structure [as the French realistic novels], but sparse. That's what I used in The Man in the High Castle.
Williams: Where you start off with one character, and then, in the next chapter introduce a new character and set them in motion towards one another, that sort of thing?
D: Right. And if you'll draw a diagram, you'll find that Childen is the first character, knows Tagomi, and ultimately they're all linked, but you can't say that any character knows all the other characters. I once diagrammed it.
W: And you never brought them all together in one room?
D: No, 'cause I thought that was dumb. That was like towards the end of this Japanese novel's structure, the grotesque scenes required to bring them all together, it became most of the work was spent figuring out how to get 'em all together.
What this all seems to me to, looking back on why I was drawn into it, why I didn't think much of the conventional novel structure,English/American, was that, well, first of all, the idea of a single protagonist. I never could understand that too well. But that's been forced on me, finally, that you have a viewpoint character who must subsume all the others, really, um, I guess [his voice gets squeaky], usually you gotta do that, but the thing that I've felt, Paul, is that problems are multipersonal, they involve us all, there's no such thing as a private problem"

This is such an important quote, as it explains where Dick got the inspiration for multi-foci plots, but, more importantly, it explains why Dick used the model and what he wanted to accomplish with it.

But Paul Williams never asks Dick to name either these students, or the novel where they used a multi-foci plot.

Then, almost eight years later, in 1981, Dick tells Gregg Rickman, in an interview printed in Philip K Dick: In His Own Words:

Rickman asks Dick about MITHC and Dick credits editor Pete Israel demanding significant revisions of Dick's draft. Then Dick says, "The structure of that novel [MITHC] is based on a structure used by students in the French department of Tokyo University after WWII [These are almost exactly the same words as Dick used to describe the structure to Williams]. That's an Oriental structure based on a French model. That's not a mainstream structure. That's a structure I worked out based on many diverse sources.

Notice, he's just made two different claims in almost adjoining sentences. So is it a structure he 'worked out' or did he borrow the whole thing from a novel? And how on Earth would Dick know about students' work at Tokyo University?

Also, Rickman doesn't bother to ask the name of the book or author.

So, Italian Dick-Head Scholar Umberto Rossi did a little Wikipedia research and discovered two writers who fit the bill:

"At the age of 18 he began to study French literature at the University of Tokyo, where he wrote his dissertation on the work of Jean-Paul Sartre. He began publishing stories in 1957 while still a student, strongly influenced by contemporary writing in France and the United States."

"He graduated from Kyoto Imperial University School of Literature. Raised to study literature from early childhood, he mastered French while in high school. (...) After graduation, Ōoka became a journalist (...) but quit after one year to devote himself to the study and translate the works of the French writer, Stendhal, and other European writers into Japanese. (...) He was also a lecturer on French literature at Meiji University in Tokyo."

There are two problems with these guys: 1) It doesn't look like Oe's work was translated and published in English prior to Dick writing The Man in the High Castle [though Umberto and I are still looking to confirm this] and 2) Umberto has read Ooka's novel Fires on the Plain, of which he says, "It's a wonderful war novel, translated into English in the late Fifties, but it's terribly single plot."

So who the heck is PKD talking about and where did find this model for his multi-foci plots? Anyone out there have a clue about this? I've got a couple sources I can ask, but I love that this mystery is so utterly Dickian. More later.
Posted by Ragle Gumm at 1:43 PM

I believe there are some other references to this also. I was reading some things about this recently and have an impression he stated at some time that he learned or read about this and/or read some of the novels at UC, Berkley. Vaguer impression this was or included UCB Library Special Collections (possibly including a thesis on file with the UCB Library). Might have had his attention drawn to it by mention in some class during his brief attendence at UCB, by mention in some magazine, from Anthony Boucher or I don't know where. Been consulting so many PKD related things lately the references just sort of melt together and evaporate. Possibly Kleo Mini stated something about this. IIRC, she went to the UCB library to pick up and return books and magzines/journals for him during a period in the 50s when he wasn't getting out of the house much plus she simply has some knowledge of his reading interests of the time. Seems to me she shared more literary interests with him and discussed such matters with him more than any of his other wives. You've some access to both Kleo Mini and UCB's library--yes or no? Or a nonbinary answer if one but not both is acceptable. ;-)

Phil might have mentioned this subject in connection with some earlier work such as Eye In The Sky or in a general comment somewhere on the form and craft of science fiction, ahem, I mean... I don't know what I mean, I'm half asleep. Anyway, I hope I've written something that may be helpful.

It may be that Dick never read the work of the students he refers to, as their work may have been untranslated at the time, but had only read about them and their work. This could have been enough for him to create a similar structure for his novel.

Robert, Dick actually says that at the end of this mystery novel all the characters are brought into the same room together - and it's pretty clear he's talking about it after having read it. ..

Is it possible Dick merely inferred or imagined the ending of a novel he had only read about, or that if there was a summary that he may have read the ending was described therein?

This is merely speculation on my part, and perhaps Dick did read a novel or novels such as he describes. But, if it can be surmised that there are no such known Japanese novels that had been translated at the time Dick wrote TMHC, it seems a reasonable speculation.

And, this is PKD remember; just because he describes something doesn't mean it necessarily happened that way.

Robert, it certainly is possible that Dick did not read the book, but rather heard about the multi-foci plot. Anne Mini suggested PKD may have been influenced by Peyton Place which uses this model.

I think first, we must assume that there is a particular novel that Dick is talking about, but barring id-ing that book, we may have to fall back to mere speculation.

Also people have pointed out Faulkner was using multi-foci plots in Sound and the Fury, and Eliot used it in his poem "The Waste Land" - it may be that Dick was referencing obscure works in these interviews to give the impression that he was more innovative than he really was...

Dick's concept of the multi-perspective narrative was a huge influence on me very early on (one of my first PKD novels as a teen was "Eye in the Sky" which is I think an emblematic experiment in the form). The notion that problems are multi-person is so key to Dick and yet so overlooked in a theoretical environment that wants to turn it into "intertextuality" or Levinas.
I don't know about these Tokyo novelists but I can say that Joyce's Ulysses is likely another good source to be discussing here. I think the way to discuss his originality or innovation on this theme would be to examine the way he applies multifocal technique in SF and philosophical/psychological works both fiction and nonfiction.

Here's a snippet from the draft of the book on Dick I'm currently writing: "Though Dick insisted on his having drawn inspiration from Japanese novelists, he never specified who those novelists were. There are indeed important Japanese writers who earned a degree in French literature at the University of Tokyo (Kenzaburo Oe, Osamu Dazai, Hideo Kobayashi), while others studied French literature at the University of Kyoto (Hiroshi Noma and Shohei Ooka), but the works of these authors which were available in English translations before the publication of The Man in the High Castle do not have a multiple plot structure, though one of them, Horoshi Noma's war novel Zone of Emptiness (1952, translated into English in 1956) does have multiple points of view. It is however difficult to see it as a narrative model to Dick's 1962 novel because there is only one plot, pivoted on the tragic story of a Japanese soldier who is imprisoned for two years in a military penitentiary for a crime he has not committed and then sent to fight (and probably die) in a faraway Pacific island; and this novel has only two narrative foci, unlike Castle. Moreover, while Dick's novel presents the reader with a rather positive image of the Japanese domination in California, which is depicted as stern but substantially fair, Noma's novel denounces the corruption of the Imperial Japanese Army and the hypocrite and narrow-minded militarism which dominated the country in W.W.II years; though it is true that private Soda's desperate efforts to save the doomed protagonist, Kitani, from the deadly bureaucratic machine of the army may bear resemblance to the rebellion of the little man Nobosuke Tagomi, which instead manages to save Frank Frink from the deadly machine of Nazi racial warfare. But it is not enough to prove that Dick had read Zone of Emptiness; besides, a component of the plot is not equivalent to the overall architecture of a novel."