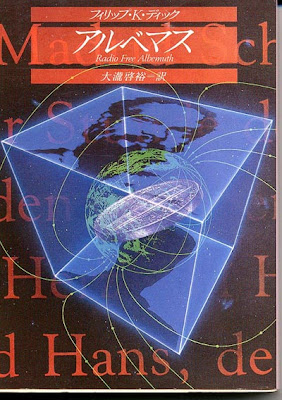 We are really lucky to have a movie director working on a PKD adaptation who is willing to talk about the experience in such detail. I've learned a lot from John Alan Simon, both on this blog and in our private correspondence, and again, I would like to thank him for the attention and concern he's shown us fans.

Prepare to geek out even farther as he delves into the intricacies of post-production tedium and the soul-crushing process of getting a film to theaters where people can see it in part two of my most recent interview with John:

Q: What are you currently working on with the movie?

A: Sound design, credits, conform and Digital intermediate. The conform means the ingestion of the high-def digital tapes to a server in order to, in essence, re-create the movie from the Final Cut Pro project files. Editing in Final Cut is really a "proxy" for the actual editing of the original footage itself. Because we shot in data-stream mode with the Thompson Viperstream camera, the hi-def footage has totally neutral color values - i.e. when you look at the footage, it's basically like black and white, but in this instance, green hued. We were able to apply preliminary color "looks" to the highly compressed footage edited in Final Cut, but in the Digital Intermediate process we'll work with a company called Hollywood DI, run by Neil Smith, and a very gifted colorist named Aaron Peak to use all the color latitude in the digital data stream to create a totally color balanced and rich color palette for the film. This is why I say to people that all movies today are bascially digital whether shot on film or not. Starting with the Coen Brothers, "Oh, Brother Where Art Thou?" virtually all movies, even those shot on film, are transferred to digital for the Digital Intermediate process before being outputted to film again. With a "digital" movie, you're just skipping the initial step of shooting on film.

As I mentioned, all of our ADR has already been done and some very gifted foley artists led by sound engineer Walter New working with his wife Bridget have done a really first-rate job re-creating all the sounds of anything done by the actors, including walking on various surfaces, handling items, etc. This is a very pain-staking process that either enhances the realism of a film or destroys it.

The digital visual effects are being given final tweaks right now also. A new effects company called Angstrom - Ergin Kuke, Yas Koyama and Klaus Seitschek have all dedicated many months now to helping me get this facet of the movie right. Another artist, Shawn Hunter also made significant contributions in this area to certain specific visual effects sequences. There are well over a hundred and twenty visual effects shots and I wanted them to be of the same caliber as the story and acting values of the movie. And again, with out limited budget, we had to find a way to turn that to an advantage, so created effects that have a retro or 'handmade' look that coincides with the 1980's time period of the movie.

I believe the results are worth the effort and dedication. I'm worried about the general economic climate for indie films right now but still confident that the same spirit that guided us through an arduous production will lead this film to the right distribution channels and ultimately, the right audience. In the final analysis, I made the film that I wanted to make. And I had some very dedicated collaborators in this adventure. And some very supportive producing partners, including Dale Rosenbloom, who began development of this story with me over ten years ago, and producer Stephen Nemeth. My wife, Elizabeth Karr was also roped in for casting and ultimately as a "co-producer," and she has worked hard with me throughout post. I also have enormous gratitude to Executive Producer, Philip Kim, our primary production financier.

The only limitations were the budget and my own talent. I have received helpful suggestions along the way from many people, for which I'm also appreciative. It's not always easy to assimilate so many viewpoints. Finally, I realized that I'd rather make a film that a relative handful of people might potentially "love" rather than a movie than a larger number of people merely "like." Studio interference and cutting of Terry Gilliam's Brazil and Sergio Leone's Once Upon a Time in America to make them more "commercial" didn't really succeed for their initial theatrical release. Only in the versions intended by the directors, did these movies achieve any success at all - passionate enthusiasm by a small, but strong base of viewers, including myself.

From this point forward, it's up to the audience, really. Probably not a huge audience in this time of G.I. Joe and Transformers 2. But I made the Philip K. Dick movie that I myself wanted to see as a more than twenty year reader of PKD. And that was a tremendous honor and privilege.

Of course, the PKD fan base will be instrumental in making this indie a success or not. they will be on the front line of viewers and hopefully they will spread the word to those who have not yet discovered the brilliance of PKD...

Thanks for your time John! If anybody wants to know more about movie making (especially screenwriting) may I suggest this series of Youtube videos that explain why The Phantom Menace is such a terrible film.

P.S. Also, interesting to note that John recently told me that his entire special effect budget for RFA was equivalent to what Cameron spent on one second of Avatar...
Posted by Ragle Gumm at 12:00 AM

I would rather see a low budget well made film than a blockbuster that is all flash and no story. I can not wait to see this film