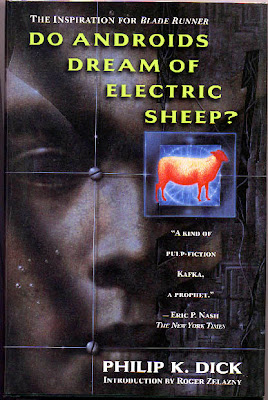 Cornell University is slated to use Do Androids Dream of Electric Sheep? as their New Student Reading Project of 2010. I've been teaching this book to Freshmen for five years now, and can say it's a great book in the classroom. Read more about it here. Here's an excerpt from a write up in the Cornell Daily Sun:

"Out of 50 shortlisted titles that members of the Cornell community suggested, Philip K. Dick’s science fiction novel Do Androids Dream of Electric Sheep emerged as the selection for the New Student Reading Project of 2010.

The novel is set in a post-apocalyptic future in 2021, after a nuclear war has driven millions of species into extinction and survivors to Mars. The plot centers on the protagonist’s struggle to identify androids in a crowd. By blurring the distinctions between humans and androids, the author explores the qualities, if there are any, which are unique to humans and separates them from automatons.

While the choice departs from the tradition of literary classics, the selection committee, which consists of students, faculty and staff members across colleges, evaluated this year’s selection along similar paradigms as the ones they used to single out The Grapes of Wrath last year.

“We chose a book that will cover a broad range of topics, like The Grapes of Wrath,” Laura Brown, vice provost of undergraduate education, said. “[The Grapes of Wrath] talks about the dustbowl, which sparks discussion about the environment and natural disasters. It also talks about economics, the Great Depression, family and the labor market. We want to generate as many topics as we can for exploration through the book we pick.”

I sure hope some students don't buy this edition of the book by mistake...

Doesn't it seem ridiculous that they decided to change the year to 2021 in the newer editions, from 1992?
The world's not gonna be like that in 2021 either, so what are they going to do then, move it forward again?
I didn't know about this until just now. Was it sanctioned by the Dick estate then?

Cornell's Dept. of PC-content and Monitoring gave a thumbs up to "Do Androids dream..."? Amazing. Surely some lit-critic somewhere, marxist lite, or fundamentalist (not necessarily xtian) considers Deckard....or the replicants crypto-nazis.


You have probably perused the Ellay Times big Dickapalooza. Actually, as far as the LAT goes, it wasn't bad, though a bit obvious to anyone who has read a few of the more popular PKD novels.

Though I grant PKD's eccentric genius to some degree, I'm not the biggest PKD fan. "Androids..." is a tight book, as is Man IAHC, and UBIK, for most part (tho' quite odd and quasi mystical--I need to revisit his 60s texts). His 70s books grow progressively weirder (corresponding to his drug-consumption...? maybe). Radio F.A. seemed nearly like madness. A Scanner Darkly was a wild nightmarish ride (see my recent blog), but I've wondered if he didn't quite finish editing the ending, or something, or... it's just ..psychosis.

Just wanted to echo the sentiment of weirdness at the fact that ALL copies of DADOES now show the date as 2021-- the year of BLADE RUNNER--rather than the original 1992. What we have here is a phildickian instance of erasure, and soon no proof will exist of the novel's original time setting. Creepy.