The Exegesis is Coming 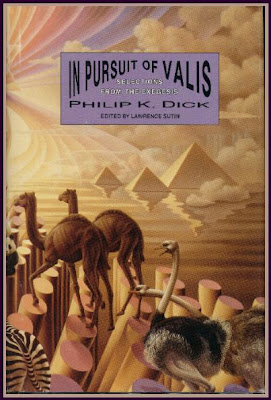 From the New York Times today (sorry, no time to paraphrase, plus they may put this article behind their firewall at some point. Read the the article in its entirety below):

After a lifetime’s worth of literature that explored the future, the farthest regions of space and the afterlife, a posthumous work by Philip K. Dick will take readers to a different alien terrain: the inside of the author’s mind.

Mr. Dick, who died in 1982, was best known for existential science-fiction novels like “The Man in the High Castle,” “The Three Stigmata of Palmer Eldritch” and “Do Androids Dream of Electric Sheep?” He also spent years of his life wrestling with what he considered religious visions that he began experiencing in the 1970s. He recorded his reactions to and attempts at deciphering these spiritual visions in a work he called the “Exegesis,” reputed to be 8,000 pages - or longer.

Though few have read the work and fewer still have fully understood it, the publisher Houghton Mifflin Harcourt plans to release “The Exegesis of Philip K. Dick” in two consolidated volumes edited by Jonathan Lethem and Pamela Jackson, a Philip K. Dick scholar, with the first to be released next year.

Mr. Lethem, the author of novels like “Chronic City” and “The Fortress of Solitude,” and who has written frequently on Mr. Dick, said Thursday in a telephone interview that he hesitated to describe ”Exegesis” as a work.

“The title he gave it, ‘Exegesis,’ alludes to the fact that what it really was, was a personal laboratory for philosophical inquiry,” Mr. Lethem said. “It’s not even a single manuscript, in a sense – it’s an amassing or a compilation of late-night all-night sessions of him taking on the universe, mano-a-mano, with the tools of the English language and his own paranoiac investigations.”

In 1974, after a number of novels that explored the notions of personal identity and what it means to be human, Mr. Dick had a series of experiences in which he believed he had information transmitted to his mind by a pink beam of light. He wrote about these and similar occurrences in autobiographical novels like “Valis,” but also contemplated their meanings in personal writings that were not published.

“It’s something that he talked about and created a kind of amazing aura around,” Mr. Lethem said, “so that people have an image of it as if it’s some kind of consummated effort. ‘I’m working on my exegesis.’ But what he really meant was, he was turning his brain inside-out on the page, on a nightly basis, over a period of years of his life.”

Houghton Mifflin Harcourt, which has also acquired the rights to 39 of Mr. Dick’s previously published works and will release them next year, plans to to release Volume 1 of “Exegesis,” which is about 350 pages, in the fall of 2011, and Volume 2, at the same length, a year later.

Mr. Lethem described the books as a chronicle of the period in which Mr. Dick “pulled himself together again, as a writer and a human being.”

“He’d been launched into outer space by the visions of the early 70s,” Mr. Lethem said, “and he was going to try to come back with the truth – and that, by definition is an impossible task.

He added: “It’s absolutely stultifying, it’s brilliant, it’s repetitive, it’s contradictory. It just might contain the secret of the universe.”

Asked for a comment on the release, I wrote this paragraph:

The fact that Dick's most personal writings are seeing the light of day offers the best evidence yet that it is Dick himself that fascinates readers, and that for many of us his novels are simply a way to get to better know this incredibly iconoclastic thinker. Whether or not these notes will allow us to better know him remains to be seen. In the grandest Dickian sense he is again blurring the lines between art and artifice, mixing the private and the public, as well as the spiritual quest for truth with what might very well be a descent into madness, forcing us to remember Emily DICKinson's declaration that "Much madness is divinest sense, to a discerning eye"

However, you see, the mastermind of the Great PKD revival is always Mr Lethem...

Ain't no PKD scholar, man! And she's from--of all places--Georgia. However she'd good looking enough. Had Dick met the lady, he'd have started wooing her!

Umberto, I heard Pamela Jackson wrote a PhD dissertation on Dick, but I've never seen any record of it...

I had to dig to find it but it looks like she published an essay on Ubik in 2005.

I'm hoping to do an interview with Mrs Jackson asap...

Gabriel, please, I do need info about that woman and her Ubik essay because she is not in VALBS and this is something that makes me suffer (psychologically)...

I love your comment upon the release David!
It perfectly encapsulates the way I feel about PKD. Obviously, when reading his great works the enjoyment is down to the brilliance of the stories with their own merits; but I always feel motivated to read any of Dick's novels/short stories, despite their wildly varying quality, because I feel like I'm digging my way to him as a person. I have many authors I love, but none do I feel such an affinity with as I do with Dick.
What is it that is so special about Dick's works that people feel this way?

Any info on this? Which works? Are they going to be hardcover, tpb or mass market pb? I'd geuss hardcover from publisher name. Prices?

Ok, now I think I've got the RIGHT Pamela Jackson... I visited the PhilipKDickFans website and I found this...

And someone who wrote a PhD dissertation on Dick in Berkeley surely qualifies as PKD scholar...

Also intriguing is the 39 works they acquired and will publish next year. Here's hoping for a complete Dick collection in hardcover!

I wonder how much - if any - overlap there'll be with the excerpted Exegesis Sutin put out a decade or two back.

@ Umberto: soooooooo people from Georgia can't be scholars? Why?

As far as the 39 backlisted titles go... we can try and do a little detective work.... PKD had 45 novels (Not counting Nick and the Glimmung) ... that leaves 6 (45 minus 6 = 39! Genius!) of the 45 not being touched by this new publisher. Next, we can assume that the 5 books that Tor Books published in the last 3 years or so won't be touched. That brings us down to 40. For the last novel it's a tough call... BUT... Ballantine under the Del Ray imprint is the publisher (I believe) for Do Androids Dream of Electric Sheep and I'm going to go out on a limb and say that it won't be included in this deal... which gives us 39. This would mean, hopefully, we'd finally get an cost effective edition of some books like Gather Yourselves Together & The Broken Bubble... possibly even a nice copy of The Ganymede Takeover... Of course, The one major x-factor here is the 5 short stories collections.

As far as format for the backlistings go...the way I read...

Indicates to me that they'll be releasing them all at once, which usually points to MMPB (sadly)... but here's to hoping that I'm dead wrong about that and we'll get some nice hardcovers or at least some TPB's to match the Vintage books... Personally I know my scrawny paperback version of The Ganymede Takeover would love to be upgraded to match it's shelf-mates. :)