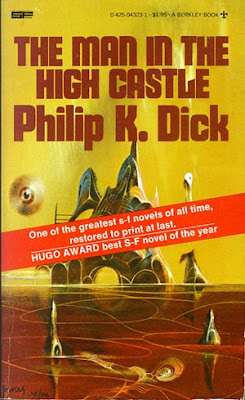 I am proud to announce we have our first guest post here on TDH. Italian Dick-scholar, Umberto Rossi, who's written extensively on PKD provides for us a snippet from the book he is currently working on, tentatively titled Ontological Uncertainty in the Fiction of Philip K Dick, to be published by McFarland. Below, Rossi does the heavy lifting involved in determining which mulit-foci novel Dick repeatedly suggested in interviews inspired The Man in the High Castle.

"Though Dick insisted on his having drawn inspiration from Japanese novelists, he never specified who those novelists were. There are indeed important Japanese writers who earned a degree in French literature at the University of Tokyo (Kenzaburo Oe, Osamu Dazai, Hideo Kobayashi), while others studied French literature at the University of Kyoto (Hiroshi Noma and Shohei Ooka), but the works of these authors which were available in English translations before the publication of The Man in the High Castle do not have a multiple plot structure, though one of them, Horoshi Noma's war novel Zone of Emptiness (1952, translated into English in 1956) does have multiple points of view. It is however difficult to see it as a narrative model to Dick's 1962 novel because there is only one plot, pivoted on the tragic story of a Japanese soldier who is imprisoned for two years in a military penitentiary for a crime he has not committed and then sent to fight (and probably die) in a faraway Pacific island; and this novel has only two narrative foci, unlike Castle. Moreover, while Dick's novel presents the reader with a rather positive image of the Japanese domination in California, which is depicted as stern but substantially fair, Noma's novel denounces the corruption of the Imperial Japanese Army and the hypocrite and narrow-minded militarism which dominated the country in W.W.II years; though it is true that private Soda's desperate efforts to save the doomed protagonist, Kitani, from the deadly bureaucratic machine of the army may bear resemblance to the rebellion of the little man Nobosuke Tagomi, which instead manages to save Frank Frink from the deadly machine of Nazi racial warfare. But it is not enough to prove that Dick had read Zone of Emptiness; besides, a component of the plot is not equivalent to the overall architecture of a novel."

Here's Umberto's Bio and the list of articles on PKD he's written:

I am an independent scholar and secondary school teacher, I have written an am writing articles on Dick published in Italian and foreign academic journals, organized an International conference on Dick in 2000 with Italian and American scholars, wrote a book on 20th-Century war literature which also deals with Dick, and am currently writing a monograph on Dick for an US publisher.

As for my articles:

4. "All Around the High Castle: Narrative Voices and Fictional Visions in Philip K. Dick's The Man in the High Castle", in Clericuzio, A., Goldoni, A. e Mariani A., Telling the Stories of America - History, Literature and the Arts - Proceedings of the 14th AISNA Biennial conference (Pescara, 1997), Roma, Nuova Arnica, 2000, pp. 474-83.

Thanks, Umberto, and keep up the great work!
Posted by Ragle Gumm at 5:28 PM

great stuff thanks very much the both of you

When the book is published, please let us know where we can buy it. If this is as good as I'm expecting I'll want to own a copy and request my local library order a copy so it is available to more of the general public.

This exciting news makes me wonder if you have any information on when or if the sixth volume of The Selected Letters of Philip K. Dick is going to be published. I've been waiting a long time for that to be published. I'd think by now the estate/trust could finance publication as a service to scholars and fans even if they don't expect it to make a profit. "Stewards of the legacy of Philip K. Dick" and all that. Maybe try to get all volumes out in mass market paperback.

Back on topic, thanks for the info on Rossi's forthcoming book. I've read some things he's written (in English) and expect this to be a high quality work.

Thank you for you kind words on my unworthy articles, however you'll have to wait for more than a year, I suspect; I should send the manuscript to McFarland in early November; then there will be a bloody and merciless editing, which might take from six to twelve months; I suspect the book will not be in the bookshops before Fall 2011, even if Winter 2011 seems more likely... However, an article I have written on Dick and radio should be published in the next issue of Foundation. Plus, I have submitted a lengthy article on The Divine Invasion to Extrapolation (a journal which has been revamped recently). I hope those two things won't disappoint you.