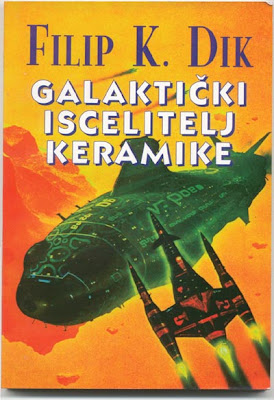 Veteran Dick-Head Frank Bertrand sent me the following post which raises some interesting questions about the narrow range of literary approaches currently being applied to Dick's irv:

My sincere thanks for posting the essay by Josh Lind titled: “Vessels of Spiritual Transformation” C.G. Jung and Philip K. Dick.” It’s the first one is quite a while that I actually enjoyed reading all the way through. Lind’s essay was cogent, relevant, and not laden with obfuscating academic jargon. Might this be the same Joshua H. Lind who wrote a 151 page MA Thesis titled: Expansive Reality and Restricted Desire in Three Novels by Philip K. Dick, that was accepted in 2004 at George Mason University?

Josh is correct to write “In fact, there have been no significant Jungian readings of any of Dick’s work – despite his documented knowledge of, and interest in, Jungian theory.” Some of this documentation would be that as early as a 6-7-64 letter to fellow write James Blish, Philip K. Dick writes “…as Jung says, by the unconscious, by your repressed hostilities,” to a November 1977 interview wherein Phil Dick states, “Yes. Yes, definitely. He [Jung] was a major influence on me,” and more recently in a 12-27-80 letter to Patricia Warrick in which Phil Dick writes, “I started out with Jung and Parsifal when I was 15 years old….”

The important and neglected question here is WHY have critics, academic or otherwise, chosen to overlook and/or ignore such an obvious connection between Philip K. Dick and Carl Gustav Jung? Is it, perhaps, not as fashionable and faddish as postmodernism, mysticism, and structuralism?

This seriocomic situation is reminiscent of a 2-1-60 letter Phil Dick wrote to Eleanor Dimoff, wherein he writes: “I call your attention to various critical articles on the novel, one by Trilling and another by José-Ortega y Gasset. It is the job of the novel to stuff up all the cracks in the walls, to shut out the “actual” world by being entire – and my novels evidently are not quite entire.”

Has anyone yet read an essay or book about Philip K. Dick that uses the literary criticism of Trilling and Gasset to explicate Dick’s fiction?

Again, why are the denizens of academia choosing to use only certain favorite critical concepts while putting aside much more obvious associations that Phil Dick himself mentions?

I really would like to try and understand this. Cogent responses would be most welcomed.

Yours in kipple,
Frank C. Bertrand

Thanks Frank! This guest post actually comes at the perfect time as I'm tearing through a four-week summer semester, preparing for a family gathering next weekend, and working on some paying gigs. And all this happens before I hop in van with Erik Davis next week for a two-day drive to Colorado for the PKD fest! So, gentle readers, ever wanted to see your name up here in lights? Now's the time to write a guest post.
Posted by Ragle Gumm at 11:29 PM

I have always thought the PKD-Jung connection was perfectly obvious (I got into PKD Jung and Faust at 15...), but I think there's a valid wariness about Jung in the academy which is keeping good people out of Jung studies. Unfortunately the guy just isn't relevant in psychological science or literary fashion. But regardless of the truth value of Jung's theories, they are explicitly and undeniably a huge and important influence on PKD. While I'm quite wary of bogus Jungian interpretation having slogged through way too many inept ones (although even when wrongheaded it's usually much more earnest and well-meaning than some of that postmodern jive), I think it's easy to make a convincing case that PKD's Jung influence should be studied. It's one of the most clear cut examples of the deep and pervasive influence of an important psychologist on an important literary author. I don't think we should be looking at PKD texts trying to prove Jung's theories, or trying to identify Jungian archetypes in PKD characters or any of those dopey exercises. Rather it should be easy to theorize how PKD is practicing the theories that he learned from Jung, and in some sense we may be able to trace what he considered psychological "findings" in the text. I don't know if Jung's model is a good one for tracing these psychological findings in some objective scientific sense, but certainly we can see quite clearly that PKD is wrestling with these ideas. then making great art, then analyzing that art with those ideas in order to further speculate, do phildickian psychological science, and make more great art.

to anybody interested in this topic--I'd recommend the books of Dan Merkur, a psychologist who's written some excellent theory on Jung, gnosticism and other esoterica relevant to PKD studies.

Jung, of course, was notoriously fixated on gnosticism. I've done a bit of research in the related field of Jung's interpretation of alchemy (and subsequent self-help cottage industry applying alchemical metaphors/symbols/processes etc), which was largely a development of the discoveries Jung made in gnosticism. I think it was Gilles Quispel who quipped "alchemy is the gnostic yoga of the west" in parody of Jung's syncretistic enthusiasm for the value of the occult for studying the unconscious.

This is obviously an important part of PKD's understanding of Gnosticism. It would be an inadequate account of PKD's views on Gnosticism that didn't feature Jung prominently.

There is a great article on PKD's "Dionysian" mode that IIRC does some Jung and might be a good place to look for more sources and connections-- "To Flee From Dionysius" (which discusses one of my favorites "Upon the Dull Earth"!) in
Philip K. Dick: contemporary critical interpretations Books Result ed. Samuel J. Umland

Ironically, all the great research in the last couple decades on Gnosticism is of much less help in figuring out what PKD meant by "Gnostic" than reading Jung's definition. (see also Hans Jonas, Eranos era religion scholarship generally)

oh man long comment I just tried to post didn't go through due to a website error. think i'm gonna cry. i'll rewrite it better in a few days.
gist of it: I've always found the Jung connection obvious and I'm only not surprised it doesn't receive more study due to the (perhaps valid) wariness in the academy for Jungian studies. I'm dubious of bad Jungian interpretation but think that it's undeniable that Jung had a profound impact on PKD and we see him playing with the theories, whatever their ultimate scientifical value.

I think that Jung can't be left out of any adequate account of PKD's concept of gnosticism. Jung was nuts about gnosticism and made some of his principal discoveries while reading it, then proceeded to project it onto lots of things like alchemy. recommended are Dan Merkur's studies on Jung, gnosticism, jungian alchemy, hermetism etc. from a psychological point of view.

there's a great article in Umland, "to flee from Dionysius" mentions the Jung connection, looks at one of my favorites "Upon the Dull Earth"

I also just finished reading Umland;s -To Flee From Dionysus-talk about synchronicity! There's a tape out there called - Philip K Dick, Gnostic Prophet of Science Fiction-. Wonder if that might have something of Jung in there?
pirkiphat60

sorry about the double post. glad the former wasn't eaten. I would say delete the latter but I guess it's usefully boiled down.

p.84 Following Jung's reading of Nietzsche (note 5), Dick conceived of a person's public personality as a "mask," and he followed Jung in imagining the unconscious as both "hermephroditic" (Paglia 85) and as the repository of the cthonic archetypes, archetypes understood as autonomous personalities that sreside in the unconcious.
"An irruption from the collective unconscious, Jung taught, can wipe out the fragile individual ego. In the depths of the collective the archetypes slumber; if aroused, they can heal or they can destroy. This is the danger of the archetypes; the opposite qualities are not yet separated. Bipolarization into paired opposites does not occur until consciousness occurs. (VALIS 10.164) (note 6)

...the passage indicates that as Dick read Jung, there is no prelapsarian state of grace which preceded consciousness; in the words of Lao-Tze of which Jung was so fond, "High rests on low"--in this case, the Dionysian, primordial archetypes that are the inheritance of each individual psyche (in VALIS [3.31] Dick refers to Fragment 54 of Heraclitus, "latent structure is master of obvious structure")... Dick imagines a movement from an original ontological duality to a Hegelian notion of an evolving, teleologically driven order. At the level of the personal psychology, this suggests that Dick reads Jungian individuation as the elevation and integration into consciousness of the shadow archetype.

p.94 I hope that this chapter will prompt a literary criticism of Dick's entire corpus that more fully accounts for his philosophical and religious obsessions, one that assumes that these obsessions are not late developments of his life (which they were not), or marginal in any definition of his fiction (they are not), but utterly essential to it... I have come to the conclusion that Dick cannot be understood fully except by approaching him through the great historiographers and hermeneuticists of esoteric religion and the occult: Hans Jonas, Mircea Eliade, Gershom Scholem, and, above all, Carl Jung.

notes
n.5 See C.G. Jung, Collected Works [Psychological Types] 6:136-146 for his discussion of "The Apollonian and the Dionysian." Jung's discussion of the "mask" in its most Nietzschean guise is in Collected Works :188-211 ("Anima and Animus"). His indebtedness to Nietzsche is discussed in Gerhard Wehr, Jung: A Biography, pp. 55-56; 72-73 and passim.
n.6 For help with this passage, see C.G. Jung, Collected works 6:199-221; and Works 4, 363ff.; also Gerhard Wehr, 49-50. His discussion "Anima and Animus" is relevant here (see note 5). The Exegesis passage in which Dick comments on his novel Galactic Pot-Healer (195-196) is also relevant here, as is his discussion of his own psychic "integration"
11. Girard's description of "possession" turns out to be quite similar to Jung's concept of "dissimulation," in that both describe one aspect of possession as being derived from projective identification. The fear of entrapment leads to dissociation rather than association (as in dissimulation). Dissociation is best described as the "possum response," an imitatio morte, or a "splitting off" of autonomous personalities. Jung refers to dissociation as a "means of adaptation" (Works 6:206). In a somewhat different discussion (in a book Dick probably read), Norman O. Brown, in Life Against Death (1959), in the context of his own discussion of the Apollonian and the Dionysian (Chapter XII), discusses projective identification, or dissimulation, using Freudian concepts and terminology. The cognate process Brown (following Freud) names an effect of the "narcissistic libido" (162).

Perhaps its not so much that Jung is out of academic favor but more that he has faded into historical context and become a vague blur along with all the other philosophets who got us to this point. The student has so much to study these days that it is easy to skim through a lot of material in a fast search for comprehension that leads to the latest theories. This is not a criticism of our educational system, just a fact of modern life.

Lord Running Clam, it's true that nobody reads Jung anymore, but that doesn't mean we can expect to understand what Dick is talking about without understanding the Jungian system. Part of the appeal of PKD's mad intellectual/religious project is that he got so much mileage out of outdated thinkers. This makes it extremely difficult to study his sources, since they're not always sources "worth reading" deeply according to the concerns of the contemporary university education. Luckily, stuff like gnosticism, alchemy, and magic are getting a lot more attention and respectability [sp?], in the Academy lately, but Jung is still quite out of fashion.