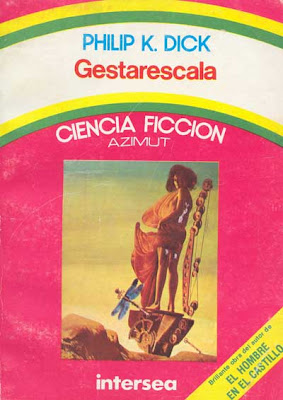 In an addendum to yesterday's guest post, Frank Bertrand clarifies his point (which I thought was perfectly clear), and, in addition, provides three important quotes to show that while critics have flirted with Jungian reads of PKD's work, Lind's essay on GPH was perhaps the first exclusively Jungian analysis of GPH to see the light of day:

Methinks I need to do a bit of self-correction; I’m quite willing to admit my mistakes. What I was trying to state about Josh Lind’s essay is that not only is it the first in quite a while that I actually enjoyed reading, but is also the first, that I’m aware of, that uses some of Carl Gustav Jung’s concepts throughout the whole essay to explicate one of Philip K. Dick’s novels, in this case, Galactic Pot-Healer. And as far as I know there is no book-length study about any of Phil Dick’s fiction using just Jung’s concepts. Yes, indeed, there have been brief mentions (at most several pages) here and there over the years applying Jungian ideas to Phil Dick’s fiction. I didn’t mean to imply otherwise. My error, if I did that. Here are three to consider:

In Fredric Jameson’s 1975 essay, “After Armageddon: Character Systems in Dr Bloodmoney,” he proposes that Phil Dick’s work can be put into three distinct cycles, the Nazi, Jungian, and metaphysical. About the Jungian he states, “…of which the best effort is undoubtedly Galactic Pot-Healer.”

Kim Stanley Robinson, in his 1982 PhD dissertation titled, The Novels of Philip K. Dick, writes in chapter 8, “…the cathedral is appropriate to Jung’s own religious art; and the Glimmung and its Shadow stand as figures for archetypal characters that Jung described.”

In chapter 5 of Patricia S. Warrick’s 1987 book-length study of Philip K. Dick, titled Mind in Motion The Fiction of Philip K. Dick, she writes, “Dick freely acknowledged that Carl Jung with his theory of archetypes and the creative process was a major influence in his thinking and writing. Nowhere is this influence more apparent than in Galactic Pot-Healer.”

This is perhaps why I was a bit perplexed when Josh Lind mentioned “critics” (plural) several times in his essay, but there was only one critic (singular) listed in his notes, Douglas A. Mackey. And in chapter 5 of Mackey’s 1988 book-length study of Philip K. Dick (titled: Philip K. Dick), we can find, “…the work [Galactic Pot-Healer] is almost a Jungian allegory. It does not lack Dick’s characteristic humanizing touches, but its tendency toward myth makes it unique among his novels.”

If the phrase “Jungian allegory” seems partly familiar, consider Stanislaw Lem’s 1975 essay “Philip K. Dick: A Visionary Among the Charlatans,” wherein he writes, “ For all that Galactic Pot-Healer leans toward allegory, it does not adopt this position either unambiguously or definitively, and a like indeterminacy as to genre is also characteristic of other novels by Dick….”

In that this evidence does indicate the influence of Jung on Phil Dick has been noted since at least 1975, why has it taken until now for a full essay exploring said influence (Lind’s) to finally appear?

Thanks again, Frank. Also see Mr Hand's comments to the last post. You guys are firing on all cylinders and I'm just spinning my wheels! I also think Rickels makes a compelling case the that the Black Glimmung is related to Lacan's notion of the mirror stage. I hope to get into this in more detail later.
Posted by Ragle Gumm at 4:17 PM

There have been some great posts and comments recently -- by some folks who are clearly very knowledgeable about Dick and Dickian studies. I wish I had more time to participate more fully. I did want to let Frank and others know that I *did* write my master's thesis on Dick. Anyone who wants an electronic copy can e-mail me at jhjalmerlind@hotmail.com.

Thanks for the positive comments about my essay. I think Jung is an important avenue of study when it comes to Dick's work -- I just wish that someone with more expertise would do it. I was just introducing myself to Jung while I was writing the paper and I feel I stinted on the potential of that perspective. I agree with other commentators that Jungian psychoanalysis is particularly low on the academic totem pole these days. There seem to be a lot of lousy Jungian articles out there that damage the prospects for other Jungian analyses. I later wrote what I believed was a provocative and compelling Jungian-inspired examination of Deep Image poetry and was just about laughed out of my seminar.

But, as in any academic endeavor worthy of being published and read, one must follow the evidence. As Frank Bertrand and Mr. Hand have pointed out, the evidence of Dick's interest in Jung is plentiful. I hope some enterprising scholar out there (who's not condemned to a dissertation on 20th century American poetry) pursues this avenue.