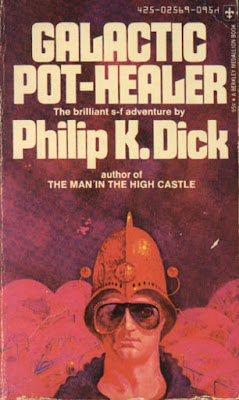 I finished Galactic Pot-Healer yesterday. Before I write about the novel, I want to do some more research. Regular reader Josh Lind was kind enough to send me a paper he wrote on GPH for grad school. I've set up a place to read Josh's essay in its entirety here - which I suggest you do - but I will also quote from it.

I also read Laurence Rickels's chapter on Glimmung in I Think I Am: Philip K Dick (I read it 5 times). He obviously has an insightful take on the book -- I have very little idea what it is however. Frederic Jameson called GPH a Jungian allegory, but Rickels calls it Wagnerian fantasy, and draws attention to its similarity to the Faust legend. I guess I buy that. Except while Joe makes a deal with a powerful deity to spice up his life, he is never promised infinite knowledge, merely satisfaction. I am ashamed to admit this, I had no idea that there was a second part to Faust, a Faust II, published the year of Goethe's death (1832). No doubt Dick read this, but I've never even heard of it. C'mon, Mephistopheles saving the Kaiser with paper money!? It sounds made up. Read the wikipedia entry though, some of it sounds relevant.

"The troubling conflict between the Glimmung and the Black Glimmung however, occurred once before, the robot remembers, at the time of the Berlin Olympics. One far-flung but snapping back approach to this reference is available through Jacques Lacan's mirror stage address, which had its premiere in 1936 in Marienbad, Lacan's stopover on his way to Berlin to witness, in his perfectly Jungian formulation, the spirit of the times. In the essay itself Lacan gives as typical dream the dream of the stadium, towered over, moreover by a grim fantasy castle. By this point we can fold it all back inside the Glimmung striving unto triumph or suicide."

Now that reference to the Berlin Olympics is interesting as hell. Here it is in more detail:

"Has this ever happened before?" Joe demanded. "Glimmung pulled under?" Instead of lifting Heldscalla up, he realized, Glimmung had been dragged down . . . to join the Black Glimmung and the Black Cathedral forever. Like _my_ corpse; a lifeless thing floating about in the form of mere debris. Dwelling in a box.
"I can fire an HB cartridge into the water," the robot said. "But a warhead like that would kill him, too."
"No," Mali said emphatically.
"This did happen once before," Willis said, reflecting. "In Terran time--" It calculated. "Late in 1936. About the time of the summer Olympics, held in Berlin, that year."

It seems Rickels has explained the reference, and it's quite an obscure one, one that would never occur to me. But, ...WTF? If I were grading Rickels as an undergrad in a writing class I would mark him down for failing to clarify his terms (snapping back approach, typical dream, 'we can fold it all back inside'). I have only the foggiest notion what he's on about.

Here's an overview of Lacan's Mirror Stage theory, and this seems relevant:

For Lacan, the mirror stage establishes the ego as fundamentally dependent upon external objects, on an other. As the so-called "individual" matures and enters into social relations through language, this "other" will be elaborated within social and linguistic frameworks that will give each subject's personality (and his or her neuroses and other psychic disturbances) its particular characteristics.

Stanislaw Lem, in his essay A Visionary Among the Charlatans, sorts GPH along with Three Stigmata, Ubik, Now Wait For Last Year, as stories of "the conversion of the order of the universe to rack and ruin before our eyes" (59), but Lem continues, more profoundly a few pages later:

"For all that Galactic Pot-Healer leans towards allegory, it does not adopt this position either unambiguously or definitively, and a like indeterminacy as to genre is also characteristic for other novels by Dick, perhaps even to a higher degree" (62).

In Christopher Palmer's essay Postmodernism and the Birth of the Author in Philip K. Dick's "Valis" (Postmodernisme et la naissance de l'auteur dans "Valis" de P.K. Dick) he points out that Dick's deities are "highly fallible" and illustrates his point with the example of Glimmung falling through ten floors to a basement in front of his gathered artisans.

In Galactic Pot-Healer (written 1967-8, published 1969), the emblematic artist-craftsman is chosen as the necessary helper of a very unclear godhead. Though any novel by Dick will have its share of felicities, the central flaw of this one is a hesitant approach to an "inner space" quasi-Jungian allegory, which is neither clear nor cogent enough to sustain the weight put upon it. It also ends abruptly, and such perfunctoriness will increase in the following three novels.

Rickels found something PKD said about GPH in the Exegesis (it looks like Rickels only had access to Sutin's previous excerpts):

Galactic Pot-Healer shows the very real possibility of encroaching madness. The archetypes are out of control. Water -- the ocean itself -- which is to say the unconscious, is hostile & rises to engulf. The book is desperate & frightened, & coming apart, & dream-like, cut off more & more from reality. Flight, disorganization: the way has almost run out. Those elements dealt with in earlier novels -- ominous elements now escape my control & take over" (195)

Thinking back to when I wrote Pot: I felt so strongly --& correctly -- at the time that when it came time, in writing the book to have the theophany occur (i.e. for Glimmung to show himself). I had nothing to say, nothing to offer because I knew nothing. Oh, & how I sensed this lack of knowledge! & now this is precisely what I do know because now I have experienced it (2-3-74).... I had no idea about the theophany at all,.... which would not and could not come with Pot; that in writing Pot that was exactly where I reached the end -- wore out and died as a writer; scrapped the bottom of the barrell & died creatively & spiritually. What misery that was! Paisley shawl, hoop of water, hoop of fire; how wretched it was; how futile" (198-199).

Speaking of futile, I spent almost all of my free time today summarizing these secondary sources. And I still have one more important place to look: Rickman's PKD In His Own Words (I know Rickman is a big fan of GPH so I bet he asked good questions about the novel).

Well, Heldscalla was not raised in a day. Stay tuned for more secondary source info, and some of my own thoughts on the book.
Posted by Ragle Gumm at 12:21 PM

Thanks for all these summarizing labours. I looked at a few secondary sources today. here's Jameson (in Archaeologies of the future): "handicrafts, and particularly pot-making, are understood as a different kind of synthesis between art and work"

Thanks much for all these resources. I found *Galactic Pot Healer* to be a dreadful piece of writing, but I plan to re-read it after establishing some background (e.g., reading *Faust*). Maybe GPH will read in a completely different way, and the dreadful writing will reveal something more dread-full...

All in all, Pot-Healer is to me a book (no, I'm not going to say "boils down to...") about artistic creation. Not a very successful one, but that seems to me what Dick was trying to do--in a moment when his prodigious productivity was declining. I might be wrong, but this is a sfnal "artist's novel". I will spare you the German.

Very interesting material indeed. It's been some time since I last read GP-H, but I do recall it a good read. I agree with Darko Suvin, in that it ends abruptly. My first impression - after reading the book - was that it should have ended with chapter 15. I did enjoy PKD's children's book, "Nick and the Glimmung," which takes place on Plowman's Planet too.

This is one of my favourite PKD books, a supremely funny and satisfying read. I think the ending is incredible.

I have only a very limited understanding of Nietzsche and his works, but GPH screams out a couple of basic Nietzschean philosophies to me.

There are those who take a "middle of the road" approach to life--like the people who play the game, and then there are those who travel in the unknown wilds where nothing is secure or safe. The former can count on familiarity, guidance, and an easy track through life. The latter type of person should expect danger, mystery, and the potential for failure.

The second type of person can also expect a type of sucess and quality of life that the former can never hope to achieve. The former are complacent and herd-like. The latter are pioneers.

Even at the end of the book, when Joe finds that his creation is "awful," that his work is a failure, the book still seems tell us that Joe is in a much better place than those game-players who have not yet tried to actually accomplish anything.

I'll finish with a quote that I find appropriate to Nietsche and GPH:

Hi Iam Prabhu from chennai,joined today in this forum... :)