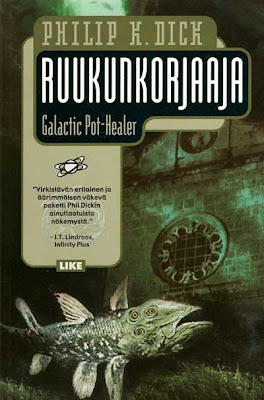 Just as I suspected, PKD has a good bit to say about Galactic Pot-Healer in Rickman's indispensable interview book: Philip K Dick: In His Own Words.

Rickman and PKD are talking about how PKD occasionally writes himself into a corner. Rickman asks if PKD makes up the books as he's writing them and PKD says this was especially true of GPH:

PKD: ... Ol' Brunner, John Brunner said to me one time about Galactic Pot-Healer, that one got away from you completely, didn't it? And I said, yeah, it completely got away from me.
But it didn't get away from me in the sense that it was running ahead of me, that I was trying to catch up with it. I mean, I was the one who was dragging it along behind me. I was winging it, but I was the one who was doing the work. That novel did not write itself. That was a very difficult novel to write. But once I established that kind of soaring quality, you know, where they just move so rapidly, it was hard to maintain. I was afraid I would fall back into that opening sort of dreary monotonous thing that [Joe Fernwright] is stuck with, and lose the whole point of the book that way.
So once I took off, I had to keep it going. In a way the book got away from me, but in a way I had to carry the book all the way to the end.
I liked that book. You know, you made some interesting points in your essay, like the Books of the Kalends tell the truth, and sometimes they lie" (90).

In the essay PKD is talking about, Rickman actually compares the Kalends' Books and the Tench (in Maze of Death) with the I Ching, which PKD used famously in writing The Man in the High Castle, among other things. One could certainly trip out for awhile on how writing science fiction is like casting the yarrow, and to have these other oracular elements in PKD's texts that use language in a dynamic relationship with reality... (sorry too much Rickels). In other words, the Books of the Kalends' seem to shape and alter reality, rather than just reflecting or recording it, however, their power to predict future outcomes is flawed (the question of free will versus destiny is indeterminate). Of course, in Maze of Death (MoD -- SPOILER ALERT!) the Tench is an avatar representing the computer that is creating the characters' reality; like the author of the novel, the Tench is the weaver of the illusory world. I'm pretty sure, I Ching folks think that you alter the future when you cast and divide the yarrow, but I don't honestly know. These kinds of Schroedinger's what-if conversations are probably best left to the people properly versed in quantum mechanics, and that ain't me.

In another chapter, Rickels talks at more length about The Game in GPH. Did you get that? In a chapter unrelated to GPH, Rickels talks again about GPH. That's why the book so desperately needs an index! Rickels draws our attention to the way the game is introduced. First Fernwright goes for a cigarette, but then, realizing he will be caught and fined, he puts the cig away and starts thinking:

What do I really yearn for? he asked himself. That for which oral gratification is a surrogate. Something vast, he decided; he felt the primordial hunger gape, huge-jawed, as if to cannibalize everything around him. To place what was outside inside.
Thus he played; this had created, for him, The Game.
Pressing the red button he lifted the receiver and waited while the creaking, slow relay machinery fed his phone an outside line.
"Squeeg," the phone said. Its screen displayed nonobjective colors and segments. Electronic crosstalk made blurrily visible.
From memory he dialed. Twelve numbers, starting with the three which connected him with Moscow.
"Vice-Commissioner Saxton Gordon's staff calling," he said to the Russian switchboard officer whose face glowered at him from the miniature screen. "More games, I suppose," the operator said.
Joe said, "A humanoid biped cannot maintain metabolic processes by means of plankton flour merely."

Interesting, right? From the very first mention, Dick associates the game with a kind of oral fixation. Rickels talks about Ludwig Binswanger's dissertation work under Jung which involved testing word association in schizophrenics (I didn't know about this) and then writes:

"The word association game whereby otherwise suicidal nerds keep themselves from killing themselves or taking a psychotic break produces, in the one patch of writing that is clinical evidence of Dick's own sense that Galactic Pot-Healer was his one completely psychotic work, the other schizophrenic word for world and time and of the things in it. In Martian Time-Slip it was 'gubbish,' which enters sentences as gubbler gubbling that which, once the sentence is delivered, is gubbish" (149)

What Rickels is getting at there (and I'm at least partially guessing about this -- I mean did you read that?) is that the following exchange in GPH introduces the world 'kipple.' (Yes, even though that lady said she made the word up in The Gospel According to Philip K Dick):

Kipple, a word seemingly derived from similar play with language, goes on to become a central term in Do Androids Dream of Electric Sheep?, a term for the all-consuming disorder that slowly destroys all form. Rickels calls 'kipple' "the schizophrenic word for world and time of and the things in it." (He astutely notes that 'gubble' is the other PhilDickian word for this universal entropy). This is precisely where The Game takes its players: to that schizophrenic isolation where words and concepts contain only personal meanings.

I think what Rickels is getting at here is that this Game is sort of schizophrenic in the sense that it involves unhooking words from consensual meaning. The collection of words 'For Whom the Bell Tolls' contains most of its meaning in a social context; the phrase coheres for all those who understand the collection of words as being a) a reference to John Donne's famous line, or b) Hemingway's lifting of Donne's phrase for the title of one of his novels, or c) a Metallica song of the same name (which could be traced to either Hemingway or Donne's use of the phrase). The cohesiveness of this phrase, its meaning, is embedded in a social context. You could not explain the significance of the phrase 'For Whom the Bell Tolls' to an alien without mentioning art, literature -- in short, culture. A schizophrenic is locked in a private world, where all meaning is personal, idiosyncratic. The Game involves transposing a familiar phrase we understand based on our shared cultural knowledge into a collection of synonyms which are meaningless without their unifying cultural referent(!). In The Game, language moves counter to meaning, and yet, while this seems like a metaphor for schizophrenia (the condition under which personal meanings subsume societal meanings and perceptions), the goal of The Game is to restore the collective meaning of the phrase, to emerge from the isolation of the Idios Kosmos.

But, and this is important, I read The Game as symptomatic of the dystopian Earth portrayed at the beginning of the novel. The Game, like the cubicle, and Fernwright's windowless apartment (con-apt?) with the artificial view projected on the wall, is an agent of derangement. But perhaps it is therapeutic as well.

Now here are some discussion questions, things to think about as I begin writing up my thoughts on the novel:

Is the Glimmung a God?

Is the Glimmung a Christ-like figure?

What is the significance of Fernwright's journey in the book? How does he change?

What is the significance of Joe's decision to exit the Glimmung rather than staying inside?
Posted by Ragle Gumm at 10:24 AM

Thanks for all the GPH discussion. I just finished re-reading it and will hopefully post my thoughts soon.

On a side note though, you're excerpts from Rickel's book are seriously making me question whether I should cancel my Amazon order of it before it is dispatched. Is it worth reading? The excerpts sound like they need to be translated by The Game to make any sense of...

the so-called schizophrenic (these days a less p.c. and less scientifically accurate metaphor) aspects of the Game are also what [potentially] give the Game its power. I'm reminded of the W.S. Burroughs cutup method. The method of taking signs and defamiliarizing them of their cultural content can be liberating, part of a transcendental project. It can also liberate you into the void--in the process of deterritorializing Control we can also lose it. In any event, it's a fascinating semiotic study. I think a lot of this attention to sign play is already evident in gnostic allegory, and it's interesting to look at gnosticism as a religion for the sign-study enthusiast. PKD was a great example of the early semiotic master: this is why he's so beloved of "we postmodernists" right?