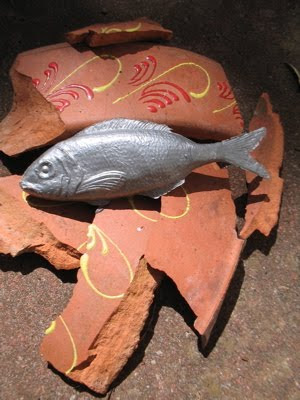 Frank Bertrand pointed me to Robert Bee's article on GPH written for the Internet Review of Science Fiction, An Alien God and a Jungian Allegory, in which Bee concludes:

"The last sentence [of the novel] emphasizes Joe’s failure: the pot is awful. Joe has returned to isolation and failure, the state he was in at the beginning of the novel. The characters that remained with Glimmung are part of a group mind that makes them greater than they were before; they retain their individuality and remain in touch with their deeper collective unconscious. Joe cannot create art because he has returned to a spiritually impoverished existence. Joe is the "hero" who does not complete his quest and cannot ultimately accept the integration of conscious and unconscious. Dick’s ending is an unusual take on Jungian style allegories, but it coheres with his desire to depict ordinary people in extraordinary situations; after all, an ordinary person might be overwhelmed by the attempt to recover spirituality in the modern world."

I can only assume that, after writing this, Mr Bee placed the gun against his head and gently pulled the trigger. Besides, the question is not whether the pot is 'good' or 'awful' - it's about whether or not it has wu. I think it does. From The Man in the High Castle:

"'The hands of the artificer,' Paul said, 'had wu, and allowed that wu to flow into this piece. Possibly he himself knows only that this piece satisfies. It is complete, Robert. By contemplating it, we gain more wu ourselves. We experience the tranquility associated not with art but with holy things. I recall a shrine in Hiroshima wherein a shinbone of some medieval saint could be examined. However, this is an artifact and that was a relic. This is alive in the now, whereas that merely remained. By this meditation, conducted by myself at great length since you were last here, I have come to identify the value which this has in opposition to historicity. I am deeply moved, as you may see.'"
Posted by Ragle Gumm at 11:41 PM

Depressing or not, that is EXACTLY what I took away from GPH as well.

All I know is I laughed my ass off when I first read that ending. I dunno if Dick is saying anything meaningful about the ultimate result of Jungian transactions, but I sure found it funny. I think he's also raising the possibility that the bad pot should be read as a comment on his own craft? "Hi I'm Philip K. Dick and I saw God, but that doesn't mean I don't still write lousy novels."

The last sentence of the novel did not at all represent failure from my perspective. Joe begins the book as a member of the dull & unwashed masses. He plays The Game, has no individuality, and no desire to create. By the end of the book, he has slowly elevated himself to becomming a leader. He does not flee when the others do, He does not abandon Glimmung, and the idea of the cathedral, and ultimately he decides to remain autonomous rather than embrace the collective existence within the Glimmung.

He makes these decisions, directs his own life and actions, and this is key. Those within the Glimmung are not living a more profound and heightened existence, they are simply becomming part of another mass. They are not truly individuals, while Joe is. He has become a creator, and this is a better path than submission to a mass--whether what he creates is a quality piece of art or not.

No artist makes great art on their first attempt--it is the mindset to create which is important. Joe can always improve in time. Those stuck within the Glimmung are destined to remain as only small pieces of a significantly flawed whole.

Joe may be flawed as well, but at least he has escaped the condition that he was in at the start of the book. Joe has not failed at all. He has just started to succeed.

From PKD's interview with Rickman about GPH: "I was afraid I would fall back into that opening sort of dreary monotonous thing that [Joe Fernwright] is stuck with, and lose the whole point of the book that way."

Seriously, that Bee guy is a huge tool. What kind of seriously fucked up mind would really think, even knowing just the smallest bit about Philip K. Dick, that he would actually be extolling the virtues of a hive mind? I mean for real? This guy actually thinks that PHILIP K. DICK is telling us that it's better to stay in the group and never try to create? It'd be funny if it wasn't so severely creepy.