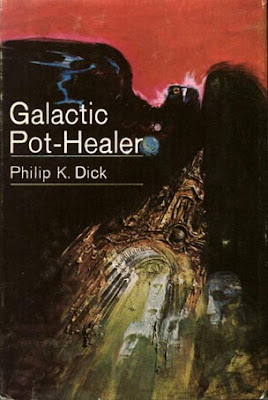 Frank Bertrand is on a roll, cracking the GPH-egg wide open. I fully endorse any and all T.S. Eliot related PKD research:

It seems a curious thing happened on the way to the realization of Phil Dick’s novel The Galactic Pot-Healer. In a 11-3-67 letter to his literary agent (Scott Meredith), Phil writes, “Here are the three signed contracts back, to be given to Berkley Books for their signatures. (The contracts are for the outline called THE GALACTIC POT-HEALER.)” Some three months later, in another letter (2-28-68) to his literary agent, Phil writes, “I have finished the novel for Berkley Books, the outline of which is called, THE GALACTIC POT-HEALER. All that is left is doing the final draft, which usually takes me no more than ten days to two weeks…. The novel came out quite well, I think. If Berkley doesn’t buy it I’m sure Doubleday would.”

Then, some thirteen years later, during a 9-30-81 interview with Gregg Rickman, Phil says, “Somewhere I just dashed off Galactic Pot-Healer, and there I just winged it. I had no plot or anything. It was very much like that second half of The Unteleported Man….Ursula LeGuin liked it, and John Brunner knew that it was out of control. He told me, look, that book got out of your control. And he was quite right. I had no idea from page to page what I was doing [sic] to do.”

What happened between having an “outline,” “ doing the final draft,” and “The novel came out quite well, “ to “just dashed of,” and ending up with “no plot or anything?”

When I’ve re-read Galactic Pot-Healer it reminds me of a lot of Phil’s other novels, and some short stories. That is, and without getting into a pedantic/esoteric discussion about “The Intentional Fallacy,” there are almost too many multi-layered/interrelated ideas/concepts (DNA strand like!) thrown together in it. And while it’s certainly true, as Josh Lind has incisively noted, that some of Jung’s ideas were an influence, and can be gleaned/culled from the novel, there is a lot more than Jung going on in Galactic Pot-Healer.

As an initial example, let us consider about halfway through chapter one, wherein Joe is talking on a vid-phone with Gauk, a minor Soviet official, about The Game, and Joe reflects, “…with nothing to do, no tasks or sorrows or difficult problems. Nothing but the harsh vacuity of their collective society….” And let us juxtapose this with what Joe thinks, about two pages later, “Because, he thought, I am too hollowed out to participate any longer. Even if they – the others who play The Game – need me, need my corny contribution.”

It’s almost too easy to interpret the phrase “too hollowed out” as an allusion to T.S. Eliot’s 1927 poem, “The Hollow Men,” as an indicator of the angst and/or alienation that Joe Fernwright feels. Perhaps these lines from the first section of Eliot’s poem help us to make sense of what Joe is experiencing:

Are quiet and meaningless

As wind in dry grass

Or rat’s feet over broken glass

In our dry cellar

Shape without form, shade without color,

But, then, we have the other phrase, “harsh vacuity,” which is, I would argue, an implicit reference to Viktor E. Frankl’s (1905-1997) notion of “existential vacuum.” In the third edition of his book, Man’s Search for Meaning: An Introduction to Logotherapy (NY: Touchstone, 1984), he writes about what logotherapy is meant to cure:

“…the feeling of the total and ultimate meaninglessness of their lives. They lack the awareness of a meaning worth living for. They are haunted by the experience of their inner emptiness, a void within themselves; they are caught in that situation which I have called the “existential vacuum.” (pgs. 110-111)

I would also like to remind us, as I’ve done more than once before, in a variety of places, that in a Philip K. Dick novel, “things are not what they seem” (Phil’s favorite quote from Gilbert & Sullivan).

Is our primary protagonist in Galactic Pot-Healer, Joe Fernwright, suffering from at least alienation, if not existential vacuum? The evidence does seem to support this interpretation.

Isn't there an interview where Dick says the Glimmung is the primary protagonist in GPH?

So every time we use the word "hollow" we are referencing Eliot? And "vacuum" must, of course, be a riff on Frankl.

Sorry, but that is rubbish. Nonetheless, thanks for saving me the effort of reading Bertrand.

I wouldn't be so quick to poo-poo. I'd read here first:
http://totaldickhead.blogspot.com/2007/06/headpiece-filled-with-straw-alas.html