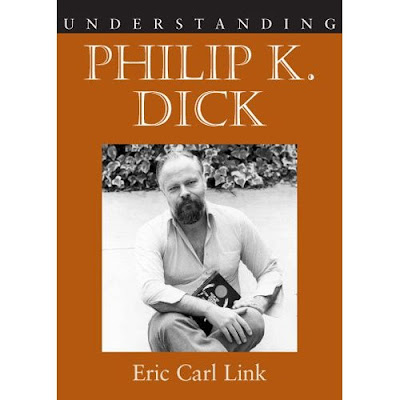 I'm enjoying the various readings of the end of GPH. Reading through Erik Carl Link's Understanding Philip K Dick, I found this paragraph from his four page discussion of Galactic Pot-Healer and thought I'd add it to the stew:

"Critics often read this seemingly cynical ending in positive terms, arguing that although the pot is 'awful' that it is nevertheless a positive step forward for Joe, and that future pots will improve as his skills improve. This might be wishful thinking on the part of these critics, however, for there is no evidence in the text that Joe's future pots will improve. On the contrary, it is clear that the creation of the awful pot, Joe poured all the talent and skill at his disposal, and it still resulted in failure. If there is anything positive to take from this comically tragic ending of the novel, it is only to be found in the nobility of the effort itself: the world may be subject to relentless cosmic decay, but there is something noble in the efforts of the individual to repair that which is broken" (73).

Doesn't it seem like Link is assuming that art has to be good to be fulfilling or meaningful? I can think of two pieces of evidence to support my positive reading of the ending. 1) The fact that Joe, before he even contemplated becoming a pot-maker, had decided to travel on to Mali's home planet rather than return to Earth. This pretty clearly demonstrates he's become self-actualized, which, for Dick, is often the heroic deed. 2) If we go back to Dick's interview with Rickman, he says, " I was afraid I would fall back into that opening sort of dreary monotonous thing that [Joe Fernwright] is stuck with, and lose the whole point of the book that way." Isn't Dick suggesting implicitly that the point of the novel was Joe's escape from dreary monotony?

Do the two interpretations of the ending mirror one another? Seem to... Is there a dark, depressing, negative interpretation? Yep. Also a hopeful, upbeat, mentally hygienic reading? You see where I'm going with this...

Link's book is a good introduction to PKD. I'll be writing more about it in the future.

Sorry for this very late comment. Am I the only one to read GPH as a historical allegory? Like, Fernwright lives in a Grand Depression America, is recruited by Uncle Sam to raise the Free World from decay, helps him to do it after Uncle Sam defeats Fascism, but then wants to recover his individuality from what is an ultimately bening, but clearly authoritarian, entity, even when his mates seem comfortable within it. And all this in the name of creativity, even if he is not a particularly gifted creator, just for having the opportunity to try to become one.