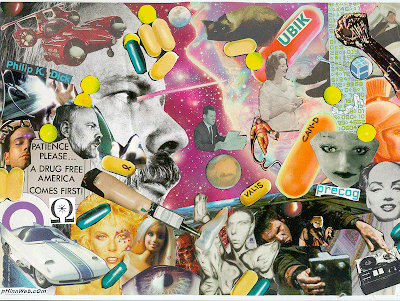 The posts here have been few and far between as I've had quite the summer. I've got a bunch of stuff to post over this coming weekend and then, next Wednesday, I'll be hitting the road with Erik Davis for the two-day drive to the PKD Fest in Blackhawk, Colorado. I'm starting to get really excited. According to organizer Lord RC the Sundance Lodge in Blackhawk will be almost completely full of Dick-heads. Can you imagine?

I'll be giving a couple of talks at the Fest (festival schedule here). On Friday, Erik Davis and I will be speaking about our experience reading The Exegesis. (Oh yeah, I never mentioned I was doing that did I? - That's because I can't talk about it very much, but yes, I am one of the scholars working with Pamela Jackson culling the folders for material to publish in the two expected volumes) On Saturday I'll be giving a talk about the limits of identity in Do Androids Dream of Electric Sheep?. This'll be very much like the lecture I give my students when we talk about the book. Hopefully both of these will be available as a podcast at some point.

Speaking of Do Androids Dream of Electric Sheep?, Cornell is really going all out in promoting the book as the Freshmen novel this year. In fact, the local library is making the book a community read. The big news is that they've contacted your humble blogger and invited me to give a talk. They're even paying the tab! I have to remember not to let all this go to my head, but it's very exciting. There was an article up about the event, but I can't seem to find it now. Hopefully it wasn't all a dream or an implanted memory.

Finally, I just finished writing a new introduction to Anne Dick's memoir, now being reissued by Tachyon Publications, and due out as soon as next month. If I were you I'd be scooping up copies to Anne's self-published edition, seeing as how the first edition, now incredibly rare, commands a pretty penny.

So things are going really well for me. I've decided that the next step is to write a book on PKD. Having now read both Rickels's I Think I Am: Philip K Dick and Eric Carl Link's Understanding Philip K Dick, it's clear to me that we're still missing a detailed, fun to read guide to Dick's life and writing. Rather than wait for someone else to write it, I'm going to try my hand at it. Hopefully the project won't keep me from regularly updating this blog. But, again, this is a great time to contribute guest posts!
Posted by Ragle Gumm at 9:51 AM

Yes!! Write that book. I want to read it. Can't wait to hear all about the meet in CO. XO from Ness

to keep up with the blog, post excerpts from the book as you write. I look forward to the podcast

Is this new edition of Anne Dick's book significantly (or even a little bit) revised from her self-published edition? I bought an autographed copy of the book from her last year and read it swiftly upon receiving it. It's quite good, and I recommend it to any PKD fan.

If the new edition is not significantly updated I probably won't pick it up, but I wish her well with it.

Re your involvement in the publishing of the Exegesis: WOW!