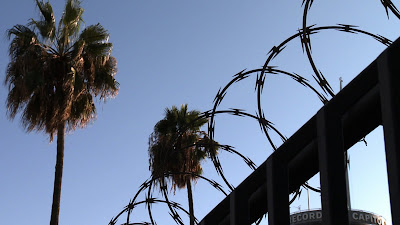 Picture: From Radio Free Albemuth
The Guardian has a surprisingly good article on adapting science fiction to the silver screen, and focuses closely on 2001 and Blade Runner. Go read the article. We'll wait....

I guess it's not precisely a PKD article, hence the machine is still probably in mothballs somewhere. But it is remarkably insightful and on target i'n'it? I love the first line:

"If science fiction is a genre of ideas, is there any wonder Hollywood doesn't get it?"

Beyond that, if there is a kind of universal element of parody in science fiction, the people being ridiculed are the ones who favor looks over substance, surface over depth, cover over book, in other words, Hollywood types in all their siliconed shallowness. Science Fiction, especially PKD's, is counter-cultural. I suppose that's not true of Asimov, but he'll be my exception that proves the rule until you all school me in the comments section. Anyway, this counter-culture is antithetical to and incompatible with Hollywood's desire to package culture for mass consumption.

Another reason Science Fiction and Hollywood mix like Vulcans and Romulans has to do with another issue repeatedly addressed in PKD's fiction: the various meanings of success. In the article, Damien Walter claims that the two best sci-fi movies are 2001 and Blade Runner. I won't argue unduly with the assertion, but certainly these are not the most financially successful science fiction movies. According to this hastily located chart, neither of these films is even in the top ten in terms of biggest grossing SF movies. Christ, Avatar is number three! Hollywood judges success in very different terms than the average movie goer. And as movies get more expensive to produce, directors and producers will naturally take fewer risks.

Maybe when we can produce big budget Hollywood effects at home on our desktop computers, our tastes will change. Maybe people will begin to make movies in their basements and they will judge success in terms of whether people like the film, rather than how much money it makes.

"Many of the Philip K Dick adaptions to hit our screens following Blade Runner have dragged those hopes lower still. A slew of star vehicles and forgettable summer blockbusters including Total Recall, Impostor, Minority Report, Paycheck and Next replaced PKD's dark and complex vision of the future with formulaic Hollywood action movie plots."

Amen! But he lists all the crummy PKD adaptations, and leaves out the good one. I wonder if he had a paragraph about A Scanner Darkly that maybe an editor cut out. I think that it's a great movie and one of my favorite PKD adaptations, and certainly it keeps the important ideas from the book, in fact it's very faithful. Interestingly, when I talk to people who don't like it, they almost always mention the roto-scoping. If that aesthetic decision turned people off is that a case of favoring aesthetics over the story's ideas?

Walter also notes that the BBC's history with SF adaptations is a little dodgy. Let's hope Ridley has an incredibly hands-on role with this project.

Lastly, what this article makes me think about is Radio Free Albemuth. From what I saw this was a good movie that retained all of the ideas from the novel. The film avoids all the big-budget action like the plague, and actually, as a result, develops quite a bit of tension from the simple drama of human interaction - kinda like PKD's books.
Posted by Ragle Gumm at 3:16 PM

Dick said his novels were, essentially, the same novel - quite ironic when you look at most of the screen adaptations. Part of me wants to be excited by the RFA film and the High Castle TV show, but. . .well, maybe I'm getting old and increasingly irrelevant.

My antipathy to the films is also quite hypocritical, given that I'm embarking on a two-year musical project based on PKD's major themes. Ah well. Pass the Ubik!

On the roto-scoping of A Scanner Darkly...I've heard the same issue from people I've shown the film to.

I've explained (which I could be completely wrong with) that it helps you get into the mind of a substance D user. It lends itself to easy manipulation and uncertainty of shapes and into the illusion of hallucination.

I'm not sure if this is why Linklater chose to use it again, but it would seem that the same could be said for the dream state in Waking Life.

Good point ct-scan, but I think that if that was the case the final scene should have been shot normally. I had no problem with the roto-scoping, but was expecting it to be shot regularly for the final scenes.

I think it would have been massively jarring if the final scenes were un-rotoscoped. I had no problem with the rotoscoping. People that have problems with it are just small-minded; the same kind of people that won't watch a B&W film, or one with subtitles, because 'it's too hard'.

I totally agree about the last scene, it would have been much more powerful had it not been roto-scoped!