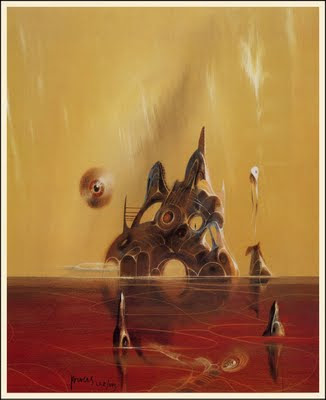 Lacking sufficient time these days to properly post about each of the exciting new Dickian developments, I have reluctantly promised myself that I will at least update the blog once a week. In these posts I will try to serve up all the news that's fit to print, and hopefully sometime in the near future I can write up some longer posts on some of the stuff I've been thinking about.

For now a little of the pressure is off because dedicated Dick-head Cal Godot has taken over philipkdickfans.com from Jason Koornick. The site was languishing, besieged by malware, spammers, and Can-D. Cal has moved the site to new servers, forever banishing the Black Glimmung's malware to the frozen seas of our rapidly degrading memories. So cruise over, register a username and let's get the chat boards going over there. philipkdickfans.com was always a really good resource, one that'll be nice to get back. As you can see when you click over there, Cal is still moving in, but there is a really good interview with PKD from the Harvard Advocate [er, make that the Hartford Advocate] in 1981.

Check out this exchange:

In an interview in 1976, you indicated that VALIS had already been sold to Bantam Books. Yet it didn't appear until early this year. What caused the delay?

"Bantam held it up for awhile because they had a change in editorship. The version that has been published was written in 1978. I guess they had a backlog; they didn't print it right away. But the real origin of the delay was the fact that I did, for the first time in my life, two completely different versions of the same book. The first version appears in the second as the movie they go see. I wasn't satisfied with the first version. I wanted to do a book that was better than my previous novel, A Scanner Darkly, and even after Bantam had purchased VALIS and all that was required was that I type a final draft, I simply was not satisfied that I had done the best book I could do." [Emphasis mine]

He's not talking about Radio Free Albemuth I don't think. It's an interesting remark. Read the whole thing.

Also, our pal, Umberto Rossi is posting over there and the organizer of the Philip K Dick Festival, Mr Lord Running Clam has even penned a review of Too Big Too Fail.

Speaking of the Philip K Dick Festival, there are some new pictures from the fest.

So Radio Free Albemuth premiered in New York. The Wall Street Journal wrote about it, but they also thought capitalism saved the Chilean miners, so I'd go with Gabriel Mckee's review of the film. Mckee writes:

"There's also a strong emphasis placed on the novel's political message. It gives a sinister illustriation of an America gradually transforming into a police state that reminded me of Southland Tales.** In this context, those contacted by the alien satellite from Albemuth become not just religious visionaries, but revolutionaries as well."

The man makes a good point. I really hope I can see a cut of this in the near future - hopefully before the government takeover.

Hopefully a bright light will fire from the sky soon enough with information about when and how this film might make it to a theater near you.

Speaking of Gabriel Mckee, he's pointed out in the comments that his DADOES exhibition is now online.

The Internetz are still buzzing about Ridley Scott producing Man in the High Castle. It is pretty exciting. I want to go back and read the book again, but my memory is that the book is fairly internal. How will that translate to the screen. Will the story still be set in an alt-1960s? We'll just have to wait and see, but somebody at the New Yorker was on about it:

"I read a lot of Dick in my teens and twenties. I’ve still got a row of crumbling PKD paperbacks on my bedroom bookshelf—sixteen of them, seventeen if you double-count one that’s an Ace Double Novel, with two stories upside-down from each other. I haven’t reread any of them for decades, but they seem to occupy a permanent place in my brain, judging from the way they pop up when I’m writing about something unusually weird."
Posted by Ragle Gumm at 9:51 PM

PKD titles are talismans that encode incantations corresponding to the specific altered states of consciousness he allegorizes in each story.

I sometimes wonder how certain PKD stories would be updated if they were adapted to film. How would the 1959/1998 years of Time Out of Joint be handled? The "future" almost certainly wouldn't be 1998 -- probably something more like 2049 -- but would Ragle's constructed world still be 1959? Or would it be updated to 2010?

I suspect that the High Castle adaptation will keep the alternate 1962 setting. It's been awhile since I've read it, but I remember a significant element of the story being the characters still trying to adjust to the relatively recent Axis victory, and updating it to 2010 would dilute that.

I always think of The Truman Show as a kind of (very loose) adaptation of Time Out of Joint. I wonder if Andrew Niccol had ever read TOOJ? I guess it's a paranoid feeling we can all empathise with.

Btw, in relation to the RFA movie, has anyone noticed Shea Whigham (who plays Phil in the aforementioned) pop up as a recurring character in the excellent new HBO series, Boardwalk Empire?

Given my hopes of seeing the filmed RADIO FREE ALBEMUTH in the near future--having just missed it by the hair of my chinny chin chin a week or so ago here in NYC--I'm rereading the novel. I read it when it was first published in the 80s...20 years ago already, jeebus! In any case, I had forgotten virtually everything about it...and it's great!

Seeing afresh how excellent this book is--and how pertinent to our times--I'm enraged all over again and even moreso that Lethem didn't see fit to include it his third volume of Dick's works for the Library of America! What the frizzen frazzen mizzenmain?! Frackengrackle brickenbrack! Grrrrr!

Perhaps in future someone'll do a special omnibus of the two novels in one volume: RFA and VALIS paired together. I've read VALIS more than once and I'm liking RFA way more than VALIS, by far.

Anyway...I urge all Dick fanciers out there to read RADIO FREE ALBEMUTH...all over again or for the first time. It's dynamite!

I have to confess I've never read RFA. I absolutely love VALIS, and because of its supposed similarity to that book I always pushed it towards the end of my list. I assume Lethem also thought it too similar to VALIS to include both in the LOA volume.
The other problem with making that third volume was that VALIS and Transmigration were always going to be included but then with them Lethem must have been compelled to include The Divine Invasion to complete the trilogy. But I don't think Divine Invasion deserves to be anywhere near a collection of Dick's best novels. Perhaps, when the LoA releases its tenth volume of PKD but not before then! So it was a tough one for Lethem.

RADIO FREE ALBEMUTH covers the same thematic ground as VALIS but is in no way similar...it's a completely different story...and also great!

I have to trust my memory of reading THE DIVINE INVASION back in 1982, but I recall it as being an excellent book. As Thomas Disch said, Dick went out performing at the top of his game...several novels in a row, all good, none tired, burned out retreads of better, older work, (something all too common in many writers with long careers, even those without some of Dick's problems).

Lethem organized the final volume around the religious themes presominant in VALIS, DIVINE INVASION, and TIMOTHY ARCHER, as well as the earlier A MAZE OF DEATH. The "Valis Trilogy," so-called, also cap Dick's career, so I don't think it was a tough decision for Lethem at all to join these books together in one volume. I fault him for not including RFA, presumably because he feels it's a lesser effort of Dick's--an opinion I couldn't disagree with more strongly. But even if he has reservations about ALBEMUTH, one would think it a no-brainer to add the book in order to show the two drastically different takes Dick took to the same autobiographical material.

It was a badly wasted opportunity, to repeat myself.

I think that just because one of his books wasn't immediately approved for publishing, doesn't mean that it's subpar by any means. RFA is a fantastic book, and I personally find it far more entertaining than VALIS. (Although VALIS is certainly more complex and deep with philosophy and religion.)

Along the same lines, I just finished up Puttering About in a Small Land, and loved it. I'm always weary about starting his non-SF books, but once I get started, I'm hooked. They're still dark, and the characters are certainly deeply flawed.

I guess what I'm saying is...read all his books, and judge for yourself.