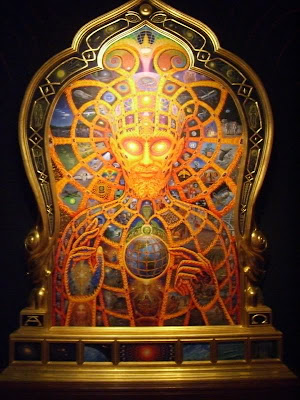 Yet another part from John Fairchild's summary and analysis of the 80-82 edition of PKD's letters - today's section takes a look at The Cosmic Christ:

Part IV The Cosmic Christ
Throughout the book, Philip K. Dick says that VALIS was the Logos, the Cosmic Christ, the macrometasomakosmos. Logos in the Greek means “word” or “reason” or “plan.” Since Phil uses the term Cosmic Christ more than he defines it, here are some quotes from the letters:

“…the Logos would be a hyper-structure that is not substantial; it is not a thing among things but rather a way things have of either fitting together harmoniously or being fitted together harmoniously by an active principle—or agent… < > … if we equate the risen Christ with the Logos, and the Logos with Pythagoras’ kosmos, and this kosmos with Plato’s Forms, then we have an all-embracing philosophy…” (p.247)

“A number of times over the years I have thought of this possibility, that V.A.L.I.S is Teilhard’s Point Omega, the Cosmic Christ into which the total unified biosphere of this planet is evolving as it becomes more and more complex, structured, organized, negentropic; this is the vast mega-structure that I wrote you about recently that transcends time, space, and causation, the hyper-structure that is pure form, insubstantial, pure organization of any and all discrete objects in nature, as Luther speaks of.” (p.255) “…when the biosphere/ecosphere becomes conscious, it becomes rational, hence becomes Logos…” (p.255) “… the Cosmic Christ is the case (as world, as the new world-order coming into being invisibly in the ruins of the old).” (p.84)
Posted by Ragle Gumm at 9:13 PM

I'm not knocking your blog TDH, as I love most of the posts, but am I the only one who thinks this Sentient Gravity stuff reads as pure gobbledygook?
I've never seen much sense in PKD's Exegesis-type theorizing, but at least it had some kind of crazy energy. This Sentient Gravity essay just seems like it was written in order to make it as obscure, abstract and pseudo-intelligent sounding as possible. Accessible? Uhm...

Giospurs,
I agree that the writing is hyperbolic, the references esoteric, the ideas.... out there, but I've read the 80-82 volume of letters and I've read some of the Exegesis (tho nothing from as late as 1980) and this is the stuff PKD was writing about. I guess what you have to decide is whether or not there are idea buried in the writing worth sussing out. I think there are.

Well, I've only read Sutin's Exegesis extracts and I enjoyed them as a biographical resource but I really don't see that it's worth trying to find any meaning from it. I guess I'm just frustrated because I'd like to see more serious PKD criticism concerning practically anything in his irv apart from the ramblings of the Exegesis.

I have to chime in and say that I admire Dick as a brilliant (if uneven) writer matched by few in the sheer fecundity and originality of his imagination and his empathy for the everyday joes and janes who make up the real world. However, whatever the source of his "pink beam" experience--a delusion, a minor stroke, the result of a physical disease or illness of the brain, or merely a hyperactive imagination reacting to extreme stress and duress coupled with abuse of medications, etc.--I don't think the experience itself or Dick's theorizing about it warrants serious philosophical or theological study as if it were a coherent body of thought. I think it indicative of a disorder of some kind, nothing more, and while it might be of interest as a pathological study, I don't really see any there there otherwise.

It's a testament to Dick's own great talent and rigorous inborn skepticism that even as he was endlessly beguiled by his own imaginings, he was able to bend his "delusions" to his will as a novelist. I'm just finishing rereading RADIO FREE ALBEMUTH, and I'm astonished at the ingenious and elaborate and gripping fictional edifice he erected from his personal crises and obsessions, particularly when contrasted with the radically different alternative use of this material in VALIS.

Dick was sane and mentally sturdy in spite of himself, and one wonders how much his obsessive working over of this material in his Exegesis was at bottom a titanic act of self-entertainment, (as much as it was also a neurotic stroking and restroking of his own idee fixe).