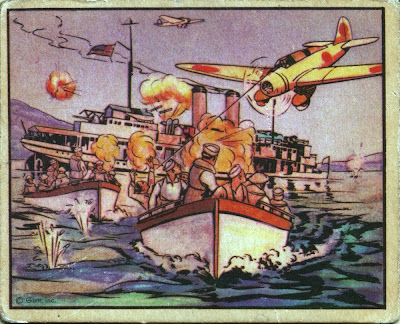 Jonathan Lethem just sent me a link to a super cool post over at a posterus blog called 'Now Hear This." The picture above is from the card mentioned in The Man in the High Castle. PKD writes:

'I am a collector,' Major Humo had explained. He had spent an entire afternoon searching among the heaps of old magazines in the store. In his mild voice he had explained something which Childan could not quite grasp at the time: to many wealthy, cultured Japanese, the historic objects of American popular civilization were of equal interest alongside the more formal antiques. Why this was so, the major himself did not know; he was particularly addicted to the collecting of old magazines dealing with U.S. brass buttons, well as the buttons themselves. It was on the order of coin or stamp collecting; no rational explanation could ever be given. And high prices were being paid by wealthy collectors.
'I will give you an example,' the major had said. 'Do you know what is meant by 'Horrors of War' cards?' He had eyed Childan with avidity.
Searching his memory, Childan had at last recalled. The cards had been dispensed, during his childhood, with bubble gum. A cent apiece. There had been a series of them, each card depicting a different horror.
'A dear friend of mine,' the major had gone on, 'collects 'Horrors of War.' He lacks but one, now. The Sinking of the Panay. He has offered a substantial sum of money for that particular card.'
'Flip cards,' Childan had said suddenly.
'Sir?'
'We flipped them. There was a head and a tail side on each card.' He had been about eight years old. 'Each of us had a pack of flip cards. We stood, two of us, facing each other. Each of us dropped a card so that it flipped in the air. The boy whose card landed with the head side up, the side with the picture, won both cards.' How enjoyable to recall those good days, those early happy days of his childhood.
Considering, Major Humo had said, 'I have heard my friend discuss his 'Horrors of War' cards, and he has never mentioned this. It is my opinion that he does not know how these cards actually were put to use.'
Eventually, the major's friend had shown up at the store to hear Childan's historically firsthand account. That man, also a retired officer of the Imperial Army, had been fascinated,
'Bottle caps!' Childan had exclaimed without warning.
The Japanese had blinked uncomprehendingly.
'We used to collect the tops from milk bottles. As kids. The round tops that gave the name of the dairy. There must have been thousands of dairies in the United States. Each one printed a special top.'

Indeed, the card did have a front and a back. Here is the back: 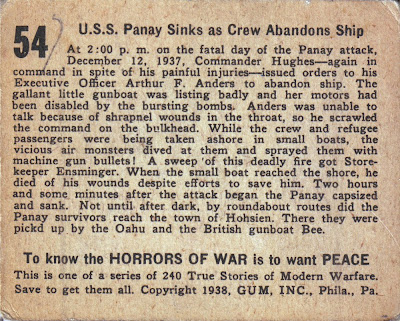 When I have some more time, maybe I'll write about how interesting these cards are: wartime souvenirs that address the horrors and glories of war in hacky prose and garish illustrations. Or maybe I'll ask my dad if he remembers collecting any of this stuff. He was born a month before PKD (don't worry, Dr Freud has already been paged).

Here's a link to illustrations of the rest of the set.
Posted by Ragle Gumm at 11:13 PM

Labels: Childan, Horrors of War Cards, I Ching, Jonathan Lethem, The Man in the High Castle

More on the Panay incident here:
http://en.wikipedia.org/wiki/Panay_incident
It's interesting that this happened in 1937, so it was a sort of harbinger of things to come, from Pearl Harbour to Hiroshima. Or the Japanese landings in California, depending on what alternate reality you live in.