Save the Androids Fundraiser 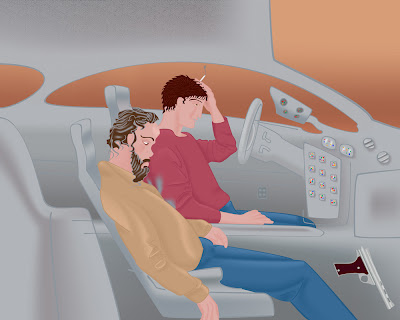 Pictured: "Deckard Retires Polokov" by Mark G Taber
I got this email today from the folks putting on the stage production of Do Androids Dream of Electric Sheep?. There was no plane ticket enclosed for me - sad. But of course I understand in these troubled times just putting on a show can tap anybody out - just ask Meg Whitman.

Anyhoo, the press release is about a fundraiser and reads, in part:

On December 4th, 2010 Untitled Theater Company #61 (UTC61) will host a benefit for the Free the Androids movement, a movement devoted to the plight of the enslaved androids on Mars. UTC61’s current production of Do Androids Dream of Electric Sheep?, a stage adaption of the Philip K Dick novel, which runs at 3-Legged Dog November 18th through December 12th was the inspiration for the fundraiser. Proceeds may also be used to help benefit the theater company.
When asked what first led him to consider the plight of artificial intelligence, Artistic Director Edward Einhorn said, “The more I dug into the material, the more aware I became of the plight of androids on Mars. We on Earth know only those androids who have escaped and gone rogue--driven rogue, I should say, by their enslavement. Mercer teaches us empathy for sheep, but what of electric sheep? What of electric humans? Empathy should extend to all.” When asked to comment on the rumor that Buster Friendly himself would leave his studio to appear at the event, Einhorn declined to respond but did note that “This will be a bounty hunter free zone. Androids can feel free to attend with an assurance of their own safety." All androids and sympathizers are welcome to come dressed for the occasion."

Are other readers getting the distinct impression these guys aren't exactly on the same page? I mean, yes, the androids in the novel tug occasionally at the heart strings, but should we, as future humans, be spending our hard-earned status rations on saving these guys and gals? We suddenly find ourselves awash in the complexity and moral ambiguity of Dick's novel. Sure the androids got it bad, but Deckard's got it worse. I mean really, the fundraiser ought to be raising money to pay for Deckard's future therapy. After realizing "the electric things have their lives, too," surely Deckard will need to spend some serious couch time coming to grips with all the andys he's retired in the past.

What good are these funds raised for the androids? Are you going to buy the robot slaves from their masters and set them free to amputate spider legs from the Shoulder of Orion to Tannhauser Gate? Seems like a bad idea.

Even though this staged production is supposed to be more faithful to the book than the cinematic adaptation Blade Runner, these folks seem to be inverting the book's moral much the way Ridley Scott changed the film to reflect his optimism about robots (rather than Dick's cynicism about humanity). Sure, the androids are victims. Of course Rosen/Tyrell are selfish capitalists, blind to the plight of their creations (symbolized brilliantly in the film by Tyrell's thick glasses), but the novel is not, for instance, a civil-rights novel like Invisible Man (it is that, in part, but more). The goal of the novel is not just to identify with the robotic otherness of the androids, but to see the way using something's 'otherness' to justify an action erodes our humanity. Part of the subtle irony of the novel is that the androids serve to illustrate Deckard's apathy, his lack of empathy, rather than telling us anything about the nature of artificial intelligence. Instead of focusing on the victimization of the slave, the novel explores the dehumanizing effect of being a master.

Don't get me wrong. I think this stage production looks interesting. We should feel sorry for the androids. They are pathetic. But Deckard's pathos is worse; his moral identity was forged in the fires of an apathetic culture and his dehumanization is worse, for he was, once, human.
Posted by Ragle Gumm at 6:25 PM

glad to contribute! and even got my name mentioned in the last post! looking forward to the play next saturday. great post, need to pay close attention when i go. nobody seemed to notice the link on reddit (!?)