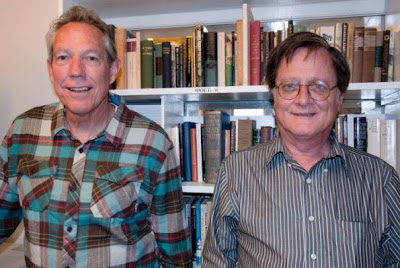 It doesn't take much more than a quick look around to realize our society is far from being a true meritocracy. Seriously, PKD himself toiled in obscurity while lesser authors were enshrined by our society. Dick's friend KW Jeter has never been given proper respect as one of the forefathers of cyberpunk. But, in a nice turn of events, the makers of the Pirates of the Caribbean juggernaut are using Tim Powers' novel On Stranger Tides as the basis for the fourth film in the series! To be completely honest, I've never seen any of these movies so I don't really know if they're any good or not. My students sure write about the films though. Either way, this deal probably means Powers has a nice little chunk of change in his pocket and perhaps even more clout as a writer. I met Powers and found him to be one of the nicest, funniest, best-hearted people I've ever met. It was easy to see why PKD found him such a great friend.

Anyhoo, there's a great article in UC Fullerton's daily paper about Powers and James Blaylock, another Fullerton alum and PKD scotch party attendee. Oh, and lest you think this post is only tangentially connected to PKD, he gets some cool attention in the interview. I particularly like this quote from Powers:
“He gave me a few early pages in VALIS while he was in typing,” Powers said. “From the other room he’d shout, ‘How do you spell nuclear?’ I’d tell him. ‘How do you spell Eliot?’ I told him. Then I said, ‘This looks really good, Phil. I’m gonna leave. I’ll let myself out.’ And then when the book was published, it was fun to see nuclear and Eliot right in the same paragraph. That was the paragraph he was typing when I was there.”

So, I did a little research and found the part of VALIS that Powers is talking about. What's interesting is that it's much more than just a paragraph. Clearly, PKD got a couple pages done while Powers was in the other room:

"The one about the nuclear wastes that contaminated most of central Utah," I said. "That disaster the newspapers reported two years ago but TV was afraid to talk about; the government put pressure on them. Where all the sheep died. The cover-story that it was nerve gas. Rockoway did a hardball film in which the true tale of calculated indifference by the authorities came out"
"Who starred?" Linda said.
"Robert Redford," I said.
"Well, we would be interested," Linda said.
"So we should get back to southern California," I said. "We have a number of people in Hollywood to talk to."
"Eric!" Linda called; she walked toward her husband, who stood with Kevin; he now had Kevin by the arm.
Glancing at me, David made a signal that we should follow; together, the three of us approached Kevin and Eric. Not far off, Sophia ignored us; she continued to read her book.
A flash of pink light blinded me.
"Oh my God," I said.
I could not see; I put my hands against my forehead, which ached and throbbed as if it would burst.
"What's wrong?" David said. I could hear a low humming, like a vacuum cleaner. I opened my eyes, but nothing other than pink light swam around me.

"Phil, are you okay?" Kevin said.
The pink light ebbed. We were in three seats aboard a jet. Yet at the same time, superimposed over the seats of the jet, the wall, the other passengers, lay the brown dry field, Linda Lampton, the house not far off. Two places, two times.
"Kevin," I said. "What time is it?" I could see nothing out the window of the jet but darkness; the interior lights over the passengers were, for the most part, on. It was night. Yet, bright sunlight streamed down on the brown field, on the Lamptons and Kevin and David. The hum of the jet engines continued; I felt myself sway slightly: the plane had turned. Now I saw many far-off lights beyond the window. We're over Los Angeles, I realized. And still the warm daytime sun streamed down on me.
"We'll be landing in five minutes," Kevin said.
Time dysfunction, I realized.
The brown field ebbed out Eric and Linda Lampton ebbed out. The sunlight ebbed out.

Congratulations Tim! Couldn't happen to a nicer guy!
Posted by Ragle Gumm at 9:55 AM

spooky coincidence (or synchronicity): I know a David who likes to read Eliot. (I also used to think it was a stange coincidence that my partner in various weird VALIS-related metaphysical adventures was named Kevin)

congrats to Mr Powers. How rare is it that the 4th movie in a series will suck less?

I guess this gives me an excuse to start watching the franchise again. The first one was good fun, but the next one was awful and so overlong.

Now that you've quoted that passage, I am afraid I'll have to rework my chapter on VALIS. Hah!

Not sure how much of Tim Powers will end up in the movie. They may have just given him a chunk of change because they had announced the name and then somebody pointed out that there was a book with the same name in existence for many years.

Fred, I don't think anyone including Tim Powers expects much of the book to be in the movie but this isn't some last minute CYA move over the title. Note the date of execution listed in the Copyright Catalog Entry.