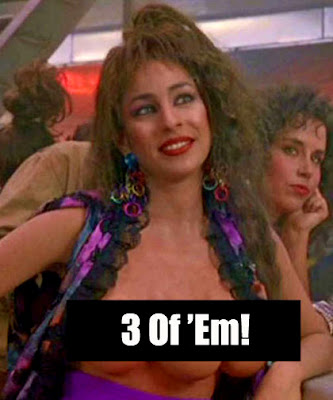 Word arrived today that production for the remake of Total Recall (which I've mentioned before) is kicking into high gear, in Canada! From Joblo.com:

"In an article over at The Toronto Star [they must mean this one, the one they didn't link to], it's revealed that Columbia Pictures' TOTAL RECALL remake is moving forward in earnest now, with production set to begin in March 2011. Shooting will take place at Pinewood Toronto Studios, a massive facility which was recently home to SCOTT PILGRIM VS. THE WORLD and THE THING.

Len Wiseman is signed to direct, while the screenplay was penned by SALT scribe Kurt Wimmer. According to the article, the production will cost somewhere in the $200 million range. We still don't know if Colin Farrell will tackle the lead role; he's reportedly been offered the part, but we haven't heard much on that front since.

Also no word on whether or not the producers are going back to TOTAL RECALL's inspiration, Philip K. Dick's book "We Can Remember It For You Wholesale", or if will more or less take its cue from Paul Verhoeven's film. Usually in a situation like this the studio always tries to con us with a "We're referencing the original source material more so than the movie" line; that's usually horseshit."

So, for me, the faithfulness of this adaptation boils down to whom they cast in the leading role. The Governator (though I'm glad to have his signature on my Masters Degree) was a terrible choice for the original role since it's written for a nebbish, pocket calculator operator like Richard Drefus, Dustin Hoffman, or the kid who played Screech on Saved By The Bell. Hey, maybe they could get one of the Degrassi kids to play Douglas Quail!

My guts says this film's going to be no truer to PKD's short story than the original film. That's my two cents, and I'm prepared to be spectacularly wrong. Electric Shepard Productions has nothing to do with this remake, so don't bother complaining about them in the comments section. Please reserve your wrath for Hollywood's current zero-risk strategy for making vapid crap that nobody likes, but lots of people still flock to see. No Tron disses - I haven't seen it yet! Hey look, Hollywood! Another shark! Are you ready?!

I don't hold out much hope that this remake will be anything spectacular either. It's a shame that so many film adaptations of Dick's work fail to capture so much of what makes his work so special and great.

Oh, remember We Can Remember it for you Wholesale is a short story, not a novel.

Have a good Christmas!

It's too bad David Cronenberg never got to make this back in the 80s before the Verhoeven version.

I also read today that there is a 'Blade Runner 2' project in the works. You can read the same article here: http://movies.ign.com/articles/107/1079095p1.html

I'm interested in how my fellow Dick-heads think about 'The Adjustment Bureau' & the tv series 'Total Recall 2070'. I haven't seen either yet.

Total Recall is one of those films I both love and hate! Never read the story but im guessing its nothing like the film. But thats ok, i dont expect films to follow books anyway. And a film should always be more entertaining than factual anyway!

I actually liked "Total Recall." It's overly long and unnecessarily gruesome, but there's enough screwing with your head to capture the Philip K. Dick vibe. When trying to explain a quality PKD work (like "The Three Stigmata of Palmer Eldritch") I usually say "The bottom falls out every twenty pages; everything you thought was real is proven unreal and substituted with something new...that will inevitably be shot to hell in twenty pages; each reality is 'the penultimate truth,' awaiting the next disturbance."

Or something like that. Anyway, I thought the previous film version had enough of that to make it 700 times better than, say, "Paycheck."

I found the short story it was based on to be...well...short, more of a neat idea than a fleshed out narrative. I'm thankful for PKD's short stories, but many of them contain just the sprouting seeds of a full, Dickian tale.

I don't have a good pick for an actor, although it seems to me that Ed Norton would do.

(Oh, and isn't it fitting that in order to post on this site, it commands you to "Choose an identity"? That seems fairly Dickian itself.)

Total Recall 2070 has almost nothing to do with the world of PKD...Total Recall the movie is much much closer in spirit to PKD than that series, if that gives perspective. 2070 is low budget sci-fi fodder. I watched the entire series as I found the bad-acting to be hilarious and I like bad sci-fi as a guilty pleasure (I also have a tendency to endure all things tangentially related to PKD)...it isn't recommended though if you are wanting to explore a PKD like universe.

when I finally got around to watching Total Recall I was surprised how much I liked it, although I thought the whole body count thing was pretty ridiculous. A few of the moments in the film are actually somewhat Dickian. Since it's not the 80's anymore my fear is that the remake will not be as accidentally hilarious as the original, but I'm not worried at all about whether it will be "faithful" to the original PKD material. A man can dream though...

What I find curious is why Hollywood goes to the trouble of optioning scripts based on PKD's stories and then deliberately changes everything that made it worth optioning in the first place.

It's like buying a gorgeous antique table for your Mom and then refinishing it down to the wood after you replace the top and all 4 legs.

Minority Report is the worst offender to my mind. They took the story and completely re-worked it untili it was an illogical mess.

I wish Hollywood would just read PKD's stories, write their inspired screenplays and leave Dick's name off their warmed over derivatives.