We Can't Read It For You 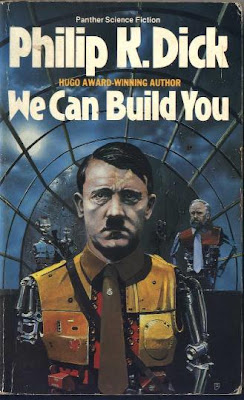 Other projects have kept me from my reading and, to be honest, I'm just a few pages into We Can Build You. I haven't delved into secondary sources yet either. Just want to kind of read the book with an open mind. I noticed a couple things right off the bat:

WCBY is written in the first person! I've never made a serious survey of the different perspectives Dick used and when, but stories of his written with the 'I' voice are not particularly common - especially during this period in Dick's career. According to most of the bibliographic studies, Dick wrote Man in the High Castle, then Martian Time Slip, then We Can Build You (Dick characteristically mis-remembers this ordering in his most famous interview with Paul Williams) - and of course WCBY hiked a long, painful road to publication. But PKD's blending of high-brow literary techniques and science fiction settings makes his writing particularly interesting to me.

Much like Galactic Pot-Healer (and many of Dick's other books) lots of PKD fans have mixed feelings about WCBY - the most common criticism being the slow pacing which makes the book boring for some. I have a new pet theory that the first-person narration may not allow the novel to switch perspectives, a technique Dick uses to keep his early books moving. Question for the comment section: Are there any other early novels written say after Man in the High Castle but before Ubik that are in the first person? Dick's most famous use of first person is in the remarkable personage of Angel Archer in The Transmigration of Timothy Archer. What we may be seeing in WCBY is an early stab at the immediacy of the first person voice lifted from mainstream or high-brow literature and spliced into pulp-sf. This experiment may be boring for some, but I think the mundane aspects of the novel are precisely the place where it gets interesting.

We Can Build You is very autobiographical - from the very first organ ad seen in the paper which was inspired by PKD and Anne Dick's search for a piano in the house. And of course, there's the Jaguar:

"The Mark VII Saloon Model Jaguar is an ancient huge white car, a collector's item, with fog lights, a grill like the Rolls, and naturally hand-rubbed walnut, leather seats, and many interior lights. Maury kept his priceless old 1954 Mark VII in mint condition and tuned perfectly, but we were able to go no faster than ninety miles an hour on the freeway which connects Ontario with Boise."

Sutin writes: "For Phil, one of the greatest joys of his new "good life" was sports cars. [Phil and Anne] bought a used Peugot then traded it for a '53 white Jaguar Mark VII Saloon with a mahogany dashboard, gray leather upholstery, and a sunroof. Phil cranked it out to 96 MPH on the freeway." 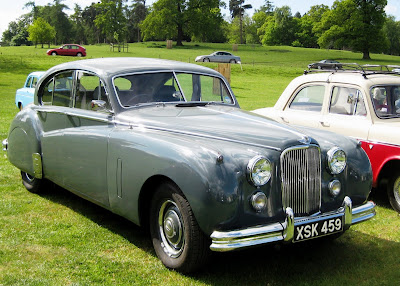 Anne Dick writes a lot about the connection the autobiographical connections in We Can Build You and I'll get into those soon enough. For now, I just wanted to let you know I'm reading the book and should have more to say about it over the weekend.
Posted by Ragle Gumm at 12:19 AM

I'm reading the Daw 1972 edition- i'm up to chap 8 and have been impressed and moved by the scope of emotional and mental explorations of soul, resurrection, mental illness, love -again, what it means to be human. very different in terms of pulp sf output by others of the genre.

First person narratives are not the first thing that comes to your mind when you think of PKD but hey, look at what novels are told by a narrating I! (I'm not gonna write the titles here becouse I've discussed this issue in my book...)

Finally finished it up. My initial thought it that it has more in common with his mainstream novels than many of the sci-fi ones. All the sci-fi elements seems unnecessary, including the simulacrum.

This was my last PKD read, and I was very impressed with the characters of this book. You can see Dick was not only allaying the mental issues of the protagonists, but also the mental issues he was likely dealing with at the same time.

I'm not much of a deep thinker due to many years of psychotropic abuse. Though I do enjoy PKD's novels above and beyond any other novelist, even though I sometimes don't really get them.

Admittedly, I've only read a handful of Dick's books, but I felt similarities in the tone and characters. It seems that Dick's novels inhabit their own created dimension much in the way that Faulkner created his own fictional place. Though Dick's place is more about mood and mental state than physical place.

The other poster's comment about not needing the mechanic people is true, I think. However, they help to create that world and add a dimension of history to the themes that I felt was interesting. The book reminded me a
good deal of Valis at first because of the relationship between the narrator and Pris and the connection between the narrator and the woman at the beginning of Valis had the same treatment. The women in his novels all seem to be curiosities that the male characters, and by extension, Dick himself, don't fully understand.

I enjoyed the mental health reflections, and of course find irony in the fact that any physician today will freely hand out depression medication to one who asks. Maybe these clinics aren't far off? Though I suppose we would go through the whole cycle of creating these state hospitals and then after complaints and problems shut them all down again and give everyone $50 to go on their merry way. And, perhaps that portion of the novel was social commentary on the mental health system of the past and the present at time of writing.

I don't know much about Dick's personal life, but this book made me even more curious. I've tended toward a new critical view in the past, but it feels like his writing is too wrapped up in his own mental state to ignore his personal history.

I do have a question though. Why does the cover have a picture of Hilter? Is that a suggestion of what would eventually come of the business? I ordered the e-book, so maybe it's different. I'll have to check. Anyway, the implications are interesting, but strange.

Glad I found this blog and was able to read along!

I think the Hitler thing is just an artist taking too many liberties. It also looks like the simulacrum to the right is Phil, not Stanton. (And it's certainly not Lincoln or Booth.)

This was the first Dick novel I read. It's not what I was expecting - no real action or excitement - but I think was a good introduction. My favourite bit is the conversation about the ants and a bucket of sand.