What to Expect From the Androids Onstage 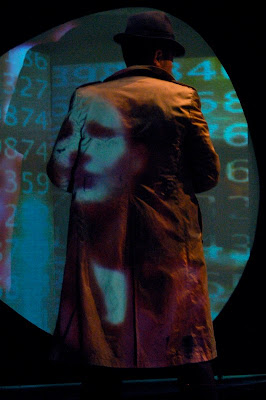 As you regulars know, there is currently a stage adaptation of Do Androids Dream of Electric Sheep? Alas, I have not been able to procure transit to the New York area, and in these troubled economic times no funding seems forthcoming. Luckily, reader Mark Rowe has generously offered an account of his experience seeing the play. Without further ado, here's Mark:

"I went to see it Saturday and thought I'd fill you in in case no one else had.

I've read the book twice and its been a year or so since the last time so some of my details on the book may be sketchy. The play is significantly closer to the book than Blade Runner, however does definitely veer from it.

The play opens with Luna (not Luba) Luft singing. While I did really like the play the music was way out there and I did not dig it.

Luna Luft is the primary android in the play. Roy Batty and Pris are in there as well but 'Luna' is the primary concern. Her being a celebrity also becomes a factor. She is seen singing on a number of occasions on the Buster Friendly show. She sings 'Mercer hymns', which I don't recall from the book. [and which is kind of weird since Buster is dedicated to Mercerism's undoing -ed]

Then the scene turns to Deckard, upset after just killing his electric sheep. I don't think he really gave a reason for killing it. He and his wife talk about the emotions they've dialed (with little gadgets around their heads). He calls Isidore at the Happy Dog Pet Shop and they talk prices for a real animal. And Bryant calls Deckard about the androids. They also have a version of the empathy box, where they open a large door with a screen on the front of it - so when they're inside you can see the actor along with projections of Mercer being stoned, walking with a tattered bloody shirt (the actor pretends to be dodging stones left and right).

Bryant has Deckard meet Rachel, Tyrell Corp is called Rosen Corp in the play. I think she said her father was Jeffery Rosen. She mentions her uncle Eldon Tyrell but they eliminate him as a character. Deckard gives her the Voigt Kampf test and asks the same questions regarding boiled dog, the poster of the naked lady etc...

I may be forgetting the order of things... But I think next was Isidore Pris meeting at JR's apartment. He talks about being a chickenhead and about all the androids being created on Mars - the media says "Everything's better on mars" but Pris says otherwise... at some point she gives herself away (fairly easily) as being an android. OH! and Pris is played by the same actress as Rachel. (I had hoped they'd come out with twin actresses towards the end but alas).

Deckard goes to meet Luna Luft (does not pretend to be someone else); he tries to give her the test but she distracts him and calls a cop (Bryant) and Bryant sends Phillipa Ryan. I was trying to recall the name Phillipa Ryan from the book but i couldn't find anything online...[sounds like a feminization of Phil Resch to me - ed]. I don't have my copy of the book readily available to flip through. She is the cop who arrests Deckard from Luna Luft's dressing room. She takes Deckard back to Bryant's office... Bryant says she's an andy and wants Deckard to kill her....[not in the book] in a standoff Bryant is killed and Phillipa reveals Bryant to be the android... There was also a blood test to prove who is and who isn't an android. I didn't recall that one in the book either. [That's the boneli test which can be performed only after the man/machine is dead]."

So at the point Bryant is revealed as an android - I'm hooked. But Luna Luft's singing keeps returning and that puts me off (even though her voice wasn't bad). So Isidore and Pris finally meet Roy Baty. Deckard kills Luna Luft whilst she is singing on TV, seemingly out of revenge for having gotten away from him the first time. Deckard's motive - while still regarding the $3k and his live animal is less driven by the 'law' with Bryant gone.

Buster Friendly is played by an actor (always while actually doing the show in studio with a camera). The fact that he kills her while on TV is made a big deal... Deckard is turned into a villian of sorts (a minor subplot) after killing everyone's favorite singer.

Deckard and Rachel meet up again and Rachel offers him money to kill Baty. There were a few 'fake' plot twists here and there that I can't recall - but something Rachel said to Deckard - which I can't completely remember - ended up not having anything to do with the actual plot. Another was when Pris I think mentioned Luna Luft to Isidore saying "I heard there are three (andys) of her around." Which wasn't true.

Deckard goes to Isidore's apt and finds Baty. Rachel also turns up. Baty and Rachel talk about a revolution and I'm sketchy on the details of the conversation, but it was as if Rachel was trying to fake out Baty ...Rachel then kills Baty.

There was another scene where Deckard comes back to kill Pris but Pris comes out dressed as Rachel (played by the same actress). He ends up killing Pris and is now distraught by having to do so. A kiss between Deckard and Rachel earlier in the play takes the place of their relationship and signifies the empathy Deckard has for the androids.

Deckard goes into Isidore's empathy box and two weeks later comes out of the empathy box at his home with a real turtle. Once his wife sees he's alive they talk about Mercerism a bit and wrap up the plot. Buster Friendly revealed Mercer to be an actor (I'm going out of order here sorry this was earlier). At the end Deckard's wife says Buster Friendly presented android parts belonging to Deckard, telling the world that Luna Luft's killer was Deckard, an andy. So Deckard is off the hook.

All in all I really liked it - there was some dialogue that hit you over the head a little hard regarding empathy and the book's message. But I loved seeing it presented on stage. My wife enjoyed it as well and she won't read an entire PKD novel (I've tried to get her to)."

Thanks Mark! This certainly sounds interesting, and no I'm not being evasive at all.
All you NYC locals, keep us posted!
I found this slide-show on the production company's website. Check it out. 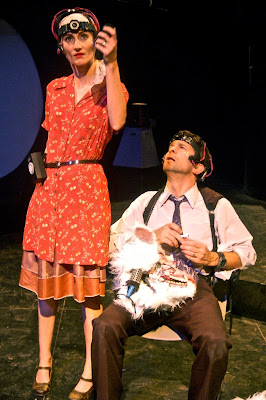 Oh, i forgot a part that should've been included.
Roy Baty goes to Deckard's apartment to take Deckard's wife hostage. That's where the confrontation takes place between Deckard, Rachel and Baty.

Thanks for your enthusiasm about our play. A few details are off :) but glad you enjoyed it--Luna sings on her own tv channel, for one, something we invented called the Mercer Channel. All Mercer, all the time. But she is also a guest on Buster Friendly at one point...and yes, Phillipa is a feminization of Phil Resch.

You may be interested in these interviews, one on aol: http://www.citysbest.com/new-york-city/news/2010/12/06/in-pursuit-of-off-off-broadway-androids/, and one on WBAI radio (the Dec 2 program) http://archive.wbai.org/show1.php?showid=hotwolf

By the way, here's a review with a pretty comprehensive description. http://www.nytheatre.com/nytheatre/showpage.php?t=doan11484 Current review also in the New York Times