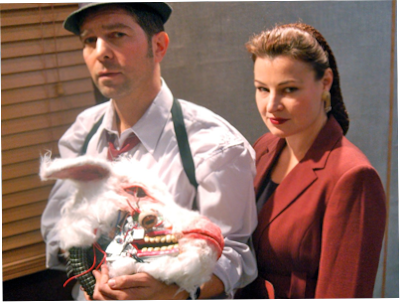 Tor.com has posted an interview with Edward Einhorn, the director of the stage adaptation of Do Androids Dream of Electric Sheep? currently running in New York City. In a recent post I may have hinted that the producers of this were on a different page, what with the mock 'Save the Androids Fundraiser', but even a cursory glance at this interview reveals that Einhorn has zeroed in on the book's central theme. Here's an important excerpt:

DB: What drew you to Do Androids Dream of Electric Sheep? And what inspired you to adapt it for the stage?

EE: I read the book after I had already seen Blade Runner, and I was struck by how different it was—and to my mind, better. The thing that intrigued me about it was Mercerism, empathy, and their relationship to the symbol of the electric sheep—none of which appeared in the movie at all. The movie is of course an entity in itself, and groundbreaking in its own way, but it didn’t capture the heart of what the book said to me.

Then I read about one of Dick’s inspirations—he had read a Nazi journal in which an SS officer complained about not being able to sleep because the crying of the children in the concentration camps kept him awake. Instead of empathizing with the suffering of the children, the officer only saw them as a nuisance that disturbed his sleep. Dick started thinking of people who lacked any sort of empathy as androids. To me, the book is all about how the process of war and killing (or being enslaved) makes people into androids, and Mercerism is all about resurrecting that spirit inside. Deckard is a character who is losing his own humanity because of his job.

This theme seemed to resonate perfectly with our mission, which as I said, is to be a Theater of Ideas. It also reminded me of Ionesco’s Rhinoceros, which I staged some years ago. During World War II, as Ionesco saw fellow colleagues succumb to anti-Semitism, he started envisioning those people as rhinoceroses, losing their humanity to a herd instinct. That connection made Do Androids Dream… seem all the more perfect material for us."

Make sure to read the rest here.

I talk about that concentration camp journal too, where does PKD discuss that, is it mentioned in Sutin?

Stay tuned, in the coming days we will have a sort of a preview/review of the show written by one of our faithful readers!

Have you had the chance to see the play yet?