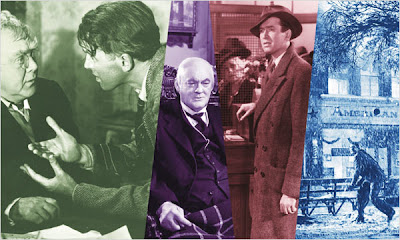 Regular readers will remember the whole Did-PKD-See-It's-A-Wonderful-Life debate that's been simmering for the last couple of years. Read this post where I lay out the significance of the film in relation to PKD's irv.. Other scholars have taken note - and this certainly wasn't my idea - but there have also been doubters. Commenters on my various IAWL-related posts have said things like:

"Without looking it up I'd suggest that the theatrical showings of IAWL were during a period when Phil would have generally avoided going to public places such as movie theaters (the Sutin and Rickman biographies should have info concerning this) and I seem to recall that he was essentially a TV non-watcher at least until 1958 or so which would certainly decrease the probability that he saw IAWL on TV before writing "A Glass Of Darkness" or very early in his writing career. As far as I know, IAWL was never cited by Phil as an influence."

"What proof or evidence is there that he saw the movie, read the story, listened to the radio play or even read or heard about it?"

Readers were naturally skeptical. Both Kleo Mini and Anne Dick said the movie was far too schmaltzy for PKD's taste. It began to look like we'd never be able to prove that Dick was familiar with the film. Maybe you don't care if the story and Dick's work are connected, but, for me, the film offers a unique and useful lens through which we can view PKD's work.

So, today, while reading the final pages of We Can Build You I was rather blown away by the following passage:

Soon we were in a 'copter, the property of the Kasanin Clinic, flying above the rooftops of Kansas City. The air was cool and crisp and below us a million lights glowed in countless patterns and aimless constellations which were not patterns at all, only clusters.
"Do you think," I said, "that every time someone dies, a new light winks on in Kansas City?"

I immediately seized on this as a rather obvious reworking of the famous like in It's A Wonderful Life, "Every time a bell rings an angel gets his wings." Interestingly, Louis Rosen is talking to members of the mental health corps, people who Louis seems to feel have saved him from suicide. Remember an angel stopped George Bailey from committing suicide in the film. Louis continues:

"Do you two know what would have happened to me," I said, "if there was no compulsory mental health program? I'd be dead by now. This all saved my life, literally."

Suffice it to say, I was pretty proud of myself. I thought I had found the proverbial missing link, and so I was eager to share my findings with some folks on the PKD litserv. British PKD scholar Andrew Butler, whose work I respect tremendously, responded quickly, pointing out that the line also seems to resonate with this line in Peter Pan:

"Every time a child says, 'I don't believe in fairies,' there is a fairy somewhere that falls down dead."

Could this be the end of our humble blogger's pet theory?

I think Butler's observation is quite astute. Let's look at the passage again:

This 'witticism' (as Rosen terms it) seems to be suggesting that Kansas City is a kind of afterlife. If this is related to the bell ringing/angel winging notion of IAWL then Rosen seems to be suggesting that a person's death (like the ringing of the bell) results in something positive happening in heaven (AKA Kansas City) but this is ass-backwards, in other words Kansas City thrives on death. Its angels (the mental health corp) benefit not from saving people but by failing to save them. To me, this seems consistent with Dick's critique of the soulless psychiatric industry in the novel.

If the witticism is a reference to Peter Pan, Rosen seems to be suggesting a different kind of reversal. Here, instead of a fairy dying as the result of unbelief, death causes a light to come on. In other words, Kansas City thrives on death and faithlessness rather than on life and faith. Both interpretations capture the nihilistic despair Rosen seems to be feeling.

So, I'd say it's time to put It's a Wonderful Life back on my Netflix cue. And if you haven't seen it, you really should. Again, whether Dick is actually referencing the movie here is a lot less important than the insight the movie can provide into PKD's irv.

Commence to skepticizing in the comments.

But let's not forget that TV series pitch in Shifting Realities:

Location: The gray, foggy landscape of Heaven. "We Are Watching You, Inc.," a small guardian angel organization consisting of Anastasia Kelp, the owner, a Paul Douglas type; Miss Theola Feather, the phone operator, receptionist, and secretary; Morris Nimbleman, the research director; the protagonist, Herb DeWinter, in charge of field operations; Ludlow Orlawsky, sales manager; Fred Engstrom, repairman for the field equipment that Herb uses on his trips back and forth between Earth and Heaven. "We Are Watching You, Inc.," is a small outfit among several giants, but its record of bailing Earthlings out of jams is virtually 100 percent; it's a small but proud, fine old "handcrafted" firm, beset with worries
Posted by Ragle Gumm at 9:57 PM

Labels: Capra, debate, It's A Wonderful Life, Little Jimmy Stewart, Peter Pan, We Can Build You

Hm, maybe you've got something, but I have to admit the first time I read that line I associated it with the more familiar 'fairy' idea from Peter Pan.

In point of fact, there are (and were) a lot of lights winking on in Kansas City at Christmas time. http://en.wikipedia.org/wiki/Country_Club_Plaza

I've never seen "It's a Wonderful Life" but I know a few things about it having heard so much talk and read so many mentions of it. Perhaps PKD decided not to watch it because he had heard it was not his thing? In which case he would have been somewhat familiar with the summary, perhaps a famous line or two?

You mention the PKD listserv, is that something a commoner like myself could get on?

Can we agree that Flow My Tears the Policeman Said can be seen as a kind of twisted re-working of It's A Wonderful Life - which I just realized is itself a variation on Dicken's A Christmas Carol - the ghost of Christmas Future, yes?

The TV series idea seems more clearly (though not necessarilly solely) related to "Adjustment Team" which PKD wrote long before WCBY. There's a synopsis at http://en.wikipedia.org/wiki/Adjustment_Team and a scan of the complete story at http://commons.wikimedia.org/wiki/File:Adjustment_Team.djvu.

One of the very significant things "Adjustment Team" and the 1967 TV series idea have in common that sets them apart from many stories, books, movies and IIRC even some TV series of the 1930s-1960s is that the agencies in both are explictly not just denominationally ambiguous representations of Christian Heaven with a contemporarily interventionist God. The TV idea is about an incorporated firm and in "Adjustment Team" the Old Man states, "We are fully licensed..."

I imagine there are literally 100s of potential literary influences besides IAWL including the obvious "A Christmas Carol" and stories that appeared in SF and Fantasy magazines which Phil read before or after he began his writing carreer.

Been a while since I've read WCBY so I don't know if something of the sort is plausible but it seems at least possible.

Perhaps, also, the lights twinkling in Kansas City could refer to the movie THE WIZARD OF OZ? (Toto, We're not in Kansas anymore) - Lord RC

Cal, I can't understand why you want to go from Los Angeles to San Francisco passing through Tokyo, Melbourne and New Dehli. The key is NOT in Build, but in that undeservedly underrated fantasy novel called The Cosmic Puppets.

Cal, Dave, we're all the same to you, huh, Umberto?