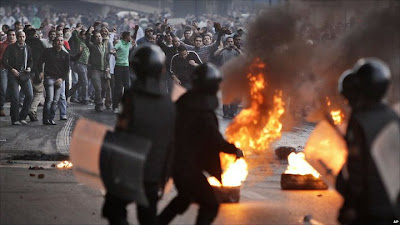 Well gentle readers, Life is happening again, and I am once more struggling to find the time to keep the blog updated. I finished We Can Build You and need to post some thoughts on that, but I wanted to write a bit this morning about John Simon's awesome adaptation of Radio Free Albemuth - as you know I saw a final cut of it recently. What you may not know is that you can now add the film to your Netflix queue. Not that the the movie's available now; it won't actually be out until after it gets some kind of theatrical release later this year, but adding the film to your Netflix queue lets potential distributors know there is interest and may help in finding a deal for theatrical release. So, obviously, add the film to your queue. 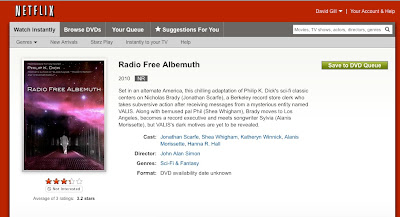 But I really wanted to talk about the movie in relation to the recent protests in Egypt. Readers of Radio Free Albemuth already know the novels deals with the autocratic and oppressive regime of Ferris F Fremont (renamed Richard Fremont in the film). When the Egyptian government started rounding up journalists last week, in my mind I kept going back to the movie, which does an amazing job of capturing the maddening injustice of a government working against its people. I think it's Rickman (correct me in the comments section if I'm wrong) who talked about seeing wounds on PKD's arms, and that PKD had told him he'd cut himself with a crushed soda can after learning of Anwar Sadat's assassination - of course Sadat was Mubarak's predecessor so this is not so totally removed from the Dickian Universe. 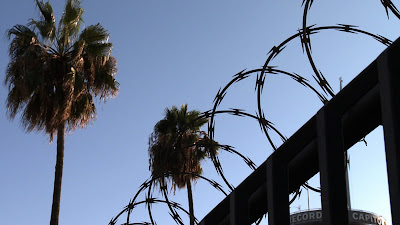 What I'm trying to get at is that Dick felt - in a physical sense - the injustice of the world; it abraded him, and saddened him in a way that's easy to underestimate given our own all-too-common detachment. At its best, Radio Free Albemuth evokes this physical, gut reaction to the ease and efficiency with which oppressive bureaucracies make the immoral moral, simply by substituting the inhuman needs of The State above the needs of the people. A day after some of the worst violence in Cairo, the government called the attacks on innocent protesters a mistake. They promised they would look into it. I got the same feeling in the pit of my stomach as I did at the climax of John Simon's cinematic adaptation.

One of the reasons the film evokes this feeling is the painstaking work Simon undertakes in building up Nick and Phil as characters. There's a scene in the movie where the two friends are shooting hoops in the gym. At first it struck me as an utterly un-Dickian scene. I can't, off the top of my head, think of any sports-related scene in PKD's irv (except of course isn't there a Dodger game near the end of Radio Free Albemuth, the novel?). As un-PKD as this scene first appears, it actually works, because it helps round out the characters. And this is a movie about characters. This is a movie about what happens to a friendship when one friend starts talking about crazy experiences. What happens to a marriage when one partner becomes convinced he's in communication with extra-terrestrials? How do loyalty and compassion work when it looks as if your friend has become un-moored from reality? These are important questions, and our answers to them tell us something about our own nature.

While VALIS is touted as the better novel - RFA is often just seen as a rough-draft of VALIS - RFA succeeds in focusing on the human elements of Dick's 2-3-74 experiences. While the human elements in VALIS are sometimes subsumed by the endless ontological riffing, Simon is able to forefront the human drama in RFA by building the narrative around Nick and Phil's friendship. As a result, the plot develops out of the characters rather than a science-fictional idea. This is one of the most interesting things that separates RFA from other adaptations of PKD's work: while Hollywood most often simply lifts one of PKD's SF concepts and grafts it into Keanu-Cruise computer-generated green-screen action flick with car chases, RFA eschews all of that in favor of the rich interpersonal drama of this friendship. 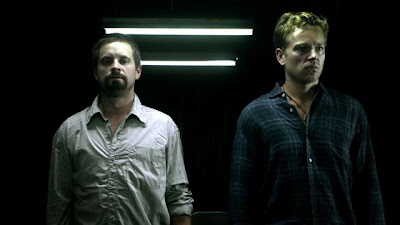 Amid all the high-stakes drama of the Egyptian protests and their foreign policy ramifications, it's easy to forget that what you are seeing on TV is a human drama, that the protests are made up not of demands but of people who want justice. Those aren't actors on your screen, and it isn't fake blood. It's an important thing to remember and Simon's adaptation of RFA in both form and content reminds us that this overarching concern with the human element in any situation is often at the core of Dick's fiction. I'm excited that one way or another, Dick-heads are going to get a chance to see this movie.
Posted by Ragle Gumm at 10:56 AM

I don't think RFA and Valis should be compared side by side as if the former were the rough draft of the latter. In some ways RFA is more successful than VALIS, or at least achieves different effects to different degrees. We've really got to think of them as two separate novels presenting different takes on the experiences.

It's interesting that VALIS is so much closer to the realist novels, rather than the conspiracy theory SF, that PKD was always trying to write. But it would be a mistake to see this realism as what makes VALIS better, since the regime in RFA highlights the "Empire never Ended" stuff so much better.

I reread RADIO FREE ALBEMUTH a couple of months ago--after stupidly missing the one NYC showing of the film, at a venue mere blocks from my job--and I was blown away. I don't remember what I thought of it when I first read it 20-odd years ago, although I'm sure I liked it, but I have to say...I prefer it to VALIS. (I'm still and will ever be cheesed off that Lethem didn't include it in his omnibus with the so-called "Valis Trilogy," and think his opinion that RFA is a decidely inferior take on its own terms on the material is as wrong-headed as wrong can be.)

VALIS seems very interior to me, dealing with the esoterica of the belief system Fat tries to develop to explain/cope with his "pink beam" experiences, and that's fine, but I find I prefer the more extroverted story of RFA, in which the same experiences are tied in to the exterior world and the evil that looms over it.

I've read VALIS at least twice, and possibly thrice, (I forget), but I'll have to read it again to compare it to my recent reading of RFA. Perhaps I'll reverse myself and hold up VALIS as the superior work*--not that we need to concern ourselves overmuch with such comparisons, as we're lucky to have both novels available.

I do look forward to RFA, the film. I can't add it to my Netflix queue, however, as I do not subscribe to Netfix and thus have no queue.

*(I'll be surprised if this is the case.)

I find myself in close agreement with both Mr. Hand and Mr. Cook. RFA is much closer stylistically to the PKD mainstream novels that I admire greatly - In Milton Lumky Territory and The Man Whose Teeth Were All Exactly Alike - than to VALIS

There is a personal, autobiographical quality to RFA in the character of Philip K. Dick that's missing for me in the VALIS transposition into Horselover Fat. Don't get me wrong. I really admire VALIS. It's reputation as one of PKD's masterpiece's is deserved. But I relate much more strongly on an emotional level to RFA. That's why I chose to adapt and direct RFA as a film.

Since Dick was a great lover of Joyce, I'll make the possibly strained analogy of Portrait of the Artist as a Young Man to Ulysees. I admire Ulysees as a modernist triumph and passages are equisite like Molly's soliloquy and the first few pages, but taken as work of fiction in its entirely it does not connect to me in the same way that Portrait does. The aesthetic overwhelms the material. In VALIS, it's the metaphysics that predominate. The characters are much thinner and the human issues move to the background for me.

I love what David has to say about the topicality of RFA to Egypt today. And all the nice things about our film.

Hey, Robert even if you can't netflix queue, you can ask your friends to queue it. Costs nothing. They don't even have to keep in their queues until it comes out. And you can still do your bit by "clicking" on Radio Free Albemuth on IMDB.com every day and on every different computer you encounter.

Thanks everyone for the support. If RFA isn't picked up for distribution soon, you may see me someday soon selling DVD's on your local street corner. Be sure to drop a nickel in the cup. Don't forget that VALIS is watching always- judging us by our hearts.

I read RFA before Valis, and as much as I enjoyed Valis, RFA told the story with more passion & clarity. It always seemed to be that PKD wrote Valis for his friends and RFA for himself.

a good time to rewatch The Battle of Algiers...