We Can Re-Build You 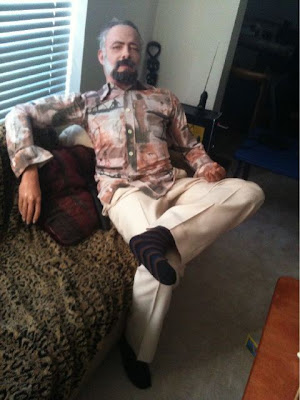 Snapped from the Interaether by devoted Dick-head Laura, this twitpic, captioned "Phil hanging out, having a chat," was posted on January 5th 2011 by @hansonrobotics, an outfit that most recently made headlines when they misplaced the head of the their last PKD-bot on a transcontinental flight (Hanson Robotics subsequently sued the airlines and lost).

Further research lead to the discovery of this tweet posted Jan. 4:

"We are excited to welcome the new Philip K. Dick robot to the Hanson family."

Then I discovered this video on YouTube, supposedly of the new PKD-bot. I wouldn't know; the video wasn't working when I visited. The caption reads:

"Hanson Robotics just rebuilt the Philip K. Dick Android! To replace the android that we lost in 2005, Dutch public broadcasting corporation VPRO sponsored this new robotic Phil. The robot is smarter and more sophisticated than ever, and is growing smarter all the time. Phil lives!!"

Hanson Robotics' website is not particularly helpful and I was unable to find any further info. But I did find this quote:

"This robot [I think they're talking about the Albert Einstein one] tracks faces and sound, percieves [sic] facial expressions, and mimics the user’s facial expressions. Our belief is that understanding human expressions can help to model human empathy and enable machine empathy."

Straight out of a Phil Dick book, man! Now I'm no cyberneticist, but that sounds like BS to me. Notice how that word 'understanding' suddenly pops up in the second sentence. 'Recognizing' and 'understanding' are not the same thing. Similarly, these machines demonstrate the difference between 'being alive' and 'being on.' Obviously we are a ways away from the technology depicted in We Can Build You, which, ironically, is set in the 1980s.

Here's some video of the PKD-machine 1.0.

But more to the point, now that Hanson Robotics has rebuilt their Philip K Dick automaton, I have to admit that this brings me no joy. I have no desire to meet it, to hear its canned responses to inane questions. The joy people seem to enjoy from these pale homo-imitations, whether they're at Disney Land, Chuck E Cheese, or pretending to be a quirky science fiction writer, comes not from the fact that these automatons mimic our behavior accurately, but that they mimic it at all. In other words, these robots get laughs whether their responses are uncannily human, or idiotically out of place.

These machines don't get any closer to consciousness than my answering machine, but I think we tend to see consciousness in something shaped like us. And that's weird and fascinating to me, but I'm not going to lose sleep imagining that sentient beings are being constructed and exploited against their will by Hanson Robotics. I prefer to imagine Hanson Robotics as a harmless, blooper-prone operation toiling away at the impossible while foolishly insisting it is almost within its grasp.

This new PKD-bot has a sort of Michael Savage-separated-birth-thing happening.

Labels: Hanson Robotics, Head., PKD Android, We Can Build You

Machine Empathy, yeah, not quite there yet. I haven't read "We Can Build You" yet, but will soon. Does it make a difference whether or not Sentience is achieved before the mimicking of facial expressions or after? I agree with you, Dave. I don't think so.

Looks like the Nannies won't be coming anytime soon either. From Popular Mechanics: Where Have All the Robots Gone?
http://tinyurl.com/4eskh3a

Of course, spy drones and weaponized drones are the big money makers these days. I wonder how the Civil War reenactment would play out with these wicked robots?