Diving Into We Can Build You 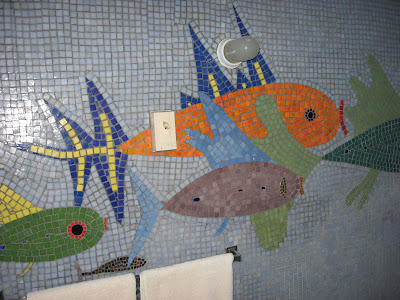 I'm about a hundred pages into We Can Build You and am just loving it. This is a book I've read a number of times - even wrote pretty extensively on it in grad school (I'm looking for the file and hope to post it) - but, for some reason, I'm getting a lot more out of it during this read. 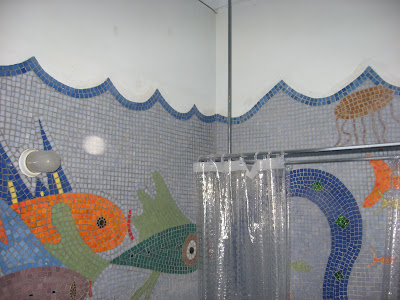 First off, pictured above and below is a mural Anne Dick made in the bathroom of her Point Reyes home during her marriage to PKD. I took the photo during one of my visits to Anne a year or so ago. This is the never-before-seen thing I mentioned in the last post.

This is how PKD describes the mural in WCBY:

"[Pris] was seated on the floor in the living room wearing pink pedal pushers. Her hair was cut short and in the years since I had seen her she had lost weight. Spread around her lay colored tile; she was in the process of cracking the tile into irregular pits with a huge pair of long-handled cutting pliers.
"Come look at the bathroom," she said, hopping up. I followed warily after her.
On the bathroom walls she had sketched all sorts of sea monsters and fish, even a mermaid; she had already partially tiled them with every color imaginable. The mermaid had red tiles for tits, one bright tile in the center of each breast" (23). 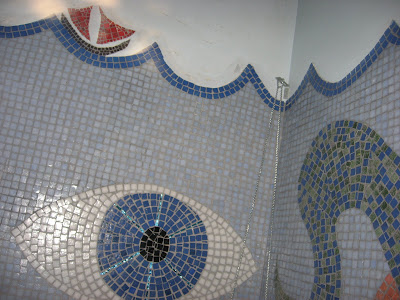 Apparently the tile mural was damaged a few years ago when a full-figured maid slipped in the tub while cleaning it and fell through one of the walls, but this has been repaired. One of the things that interests me about this book is the character Pris and how closely she has been associated with Anne, which of course makes sense, but when looking a little closer, I see the biographical origins of her character as more complex.

I think it's interesting that at one point, Dick ascribes his own psychological history to Pris. Louis narrates:

While he ate his breakfast Maury told me about her development. Originally she had been a withdrawn child, what they call encapsulated or introverted. She kept to herself, had all sorts of secrets, such as a diary and private spots in the garden. Then, when she was about nine years old she started having fears at night, fears so great that by ten she was up a good deal of the night roaming about the house. When she was eleven she had gotten interested in science; she owned a chemistry set and did nothing after school but fiddle with that--she had few or no friends, and didn't seem to want any.
It was in high school that real trouble had begun. She had become afraid to enter large public buildings, such as classrooms, and even feared the bus. When the doors of the bus closed she thought she was being suffocated. And she couldn't eat in public. Even if one single person was watching her, that was enough, and she had to drag her food off by herself, like a wild animal. And at the same time she had become compulsively neat. Everything had to be in its exact spot. She'd wander about the house all day, restlessly, making certain everything was clean--she'd wash her hands ten to fifteen times in a row" (32).

So, at this point I think it's an oversimplification to say that Pris is a depiction of Anne.

I'm actually looking forward to seeing what Rickels has to say about WCBY. As difficult as his prose is, I think he may be able to offer some insight. Specifically, I am intrigued by Louis Rosen's reaction to meeting the Stanton simulacrum: Louis begins to suspect he, himself, might be a simulacrum, a mechanical replacement of a man no longer living. This is odd to me. Many people with mental illness, especially paranoia and schizophrenia, see others as possible simulacra - this is actually quite common, and I think related to Viktor Tausk's notion of the "Influencing Machine" in schizophrenia. But Rosen's preoccupation with his own inauthenticity is different and I hope Rickels can point to a specific case study that features this idee fixe (as he does with Richard Kongrosian's phobic body odor in The Simulacra). Perhaps this may shed some light on Rosen's preoccupation. Rollo May wrote:

"I have described the human dilemma as the capacity of man to view himself as object and as subject. My point is that both are necessary -- necessary for psychological science, for effective therapy, and for meaningful living. I am also proposing that in the dialectical process between these two poles lies the development, and the deepening and widening, of human consciousness."

I think Pris shares a lot in common with Ellen West, one of Ludwig Binswanger's more famous patients. The problem is most of Binswanger's work is written in German so it's hard to study (interested parties should consult Rollo May's anthology on Existential Psychology Existence). You can read a very short account of West's life here. West was an anorexic who battled depression, but as a gifted poet she provided her analysts with incredibly vivid depictions of her mental illness and elements of these accounts appear almost verbatim in some of Dick's books. West talked extensively of a 'tomb world.' Boeree writes:

"Ellen, somewhere in her childhood, has split her life into two opposing camps: On the one hand there is the "tomb world," which includes her physical and social existence. Her body, with its low needs, distracts her from her purposes. It gets older every day. Her society is bourgeois and corrupt. The people around her seem oblivious to all the evil and all the suffering. In the tomb world, everything is degenerate and degenerating, everything is being pulled down, into the grave, into a hole.

On the other hand there is the "ethereal world," the world of the soul, pure and clean, a world where what needs to be done is done, where acts are effortless because unencumbered by the weight of matter. In the ethereal world, we can be free and fly.

There are some people who try to ignore the "ethereal world." They don't like the anxieties and responsibilities that come with freedom. Some would rather be told what to do, and so join a cult or a gang or a multinational corporation. But they are still frightened, because they know this isn't right. They are not living their life, and so they can never be happy" (read the rest here).

"...the skinniness of her body put the capper on the effect: she looked to me like a dance of death creation animated in some weird way, probably not through the usual assimilation of solid and liquid foods . . . perhaps she chewed only walnut shells. But anyhow, from one standpoint she looked good, although unusual to say the least. For my money, however, she looked less normal than the Stanton" (23)

I'm going to stop here. Not that I don't have a lot more to say, but the first rule in blogging is 'Don't write too much because people won't read it'

Stay tuned for more, including the hidden double meaning in the title....

I've dated a "Pris" or two. Thanks loads for the photos, that's treasure.

Yes, I think Pris is more Philip K Dick than Anne also. I kind of wonder if all these "schizoid female" characters of that period are himself. Maybe not consiously, but I'd say he is projecting his "shadow" on Anne, to use a Jungian term.

As for Rosen's preoccupation with his own inauthenticity:


"Depersonalization is an alteration in a person's perception or experience of self; for example, feeling detached from the self as if one were an outside observer of one's self. It may also manifest itself in terms of a feeling that the self is strange or unreal, feeling like one is in a dream, or feeling like a robot."

Oh, and there is also Cotard delusion as well...

Anne's maid "fell through one of the walls"? Was she a maid or a battle android? Or some Heinleinian MI soldier with his armour on? However, David, the pics of the mosaics are just great, and they do cast light on the genesis of this novel; these details definitely place it near the group of realistic novels.

However, I do believe that the trickiest character in WCBY is the narrator.

wow its greate to see it. We can build you is one of the greatest i can read it and read and read again

hopefully proving i'm not just some tetchy punk from limeyland -
THIS entry and, say, randomly, the Linda's letters linkage, are proof of:
1) what a frickin' top drawer blog this often is.

2)the effort you put into it.