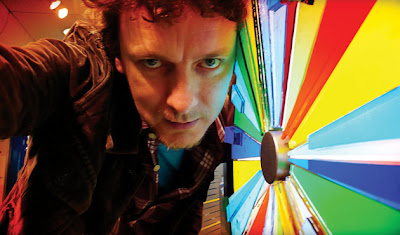 It's all over the Internetz folks. I've been scooped by freakin' third-rate movie blogs.

Tell us about it:

"Director Michel Gondry, whose Green Hornet movie is currently in theaters, is developing a screen adaptation of the acclaimed Philip K. Dick sci-fi novel Ubik as a future project.

According to The Playlist and Deadline, Gondry is attached to adapt and direct Ubik for Film Rites (run by Oscar winner Steven Zaillian) and Anonymous Content. The project isn't set-up at a studio yet."

I delved a bit into my archives and located this post from three years ago:

The film will be produced by Hengameh Panahi of Celluloid Dreams and Isa Dick Hackett, the author's daughter, of Electric Shepherd Prods. It is skedded to go into production in early 2009."

So there is something of a long, strange trip with this film. And perhaps this is not the last word. I honestly feel a little ambivalent about Gondry. I would have been incredibly enthusiastic if he had just finished Eternal Sunshine of a Spotless Mind, but he's made two movies in the interim I was lukewarm about (to put it kindly). I am a little concerned about the cutesy-poo element in his work. Write in caps at me in the comments if you must. 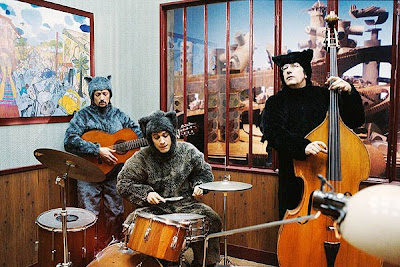 Perhaps most annoying is the fact that none of these articles about Ubik mention Radio Free Albemuth, further convincing me that Hollywood really is just a cliquey grade school playground.
Posted by Ragle Gumm at 1:33 PM

UBIK, would be my favourite PKD novel behind Flow My Tears. While I was initially very excited about the prospect of this finally being adapted. Seeing Gondry's name attached has sent me reeling backwards.

I enjoyed Eternal Sunshine of the Spotless mind, but have been far from impressed with his later works.

Ahh well, will just have to wait and see.

Hmmm, Ubik is my favorite as well. It's what got me into the PKD craze. While it pains me to see anyone attempting to adapt this masterpiece, I suppose at least here we've got someone who can do a half decent job (don't get me wrong, nothing will ever compare to the novel). Gondry can have a weird feel, like in Science, that might transfer to the loss of the grounds of reality in Ubik, but, yeah, if he lightens up the dark tones at all, it will be disastrous.

Overall, I'm routing that this, like all the other things we've heard about an Ubik film in the past, just fizzles out. It could never live up. Gondry, please pick something else.

Pardon me while I continue to stroke my beard.

Do you think they'll film it on location in Des Moines? That'd be great!

Hm, I think Gondry is a great music video director but I'm not sure if Ubik is right for him.
Eternal Sunshine was a great film, but the subsequent work of both Charlie Kaufman and Gondry have convinced me that it is Kaufman that is the genius, not Gondry.

I haven't been interested enough to see a Gondry movie all the way through, only started Sunshine. One of my buddies is a defender. Love watching these taste wars.

Speaking of movie adaptations--do y'all think the new Neeson flick "Unknown" sounds suspiciously similar to the basic premise of "Flow my Tears?"

I guess every directors are developing many, many projects at the same time. Gondry is directing at last one movie before starting 'Ubik'. So don't hold our breath.
After all, Martin Scorcese was interested by 'Do Androids...' in 1968 !

your comment about no one saying anything about RFA reminds me of what Gore Vidal said about Hollywood: no one cares about the writers. It's all about the precious directors.

Gondry is hit and miss, and those misses have unfortunately been his two most recent films. He also comes across as an arrogant and ignorant butt monkey in interviews. Ubik is tied with A Scanner Darkly as my favorite PKD novel, and I have little faith in Gondry's film if he writes the screenplay.

Open Your Eyes was on TV the other day. Great film. It was remade as the awful Vanilla Sky. The basic plot is stolen right out of Ubik, but the director thankfully made it his own.

Mr. Hand: I see the similarity, but Unknown looks like nothing more than another simplistic action film in which Liam Neeson is angry about something. I expect it to have roughly 2% the intelligence of a typical PKD novel.

Anne Dick tells a story about Stanley Kubrick considering The Man In The High Castle in the mid-70s. Can you imagine?

I like Ubik but The Three Stigmata of Palmer Eldritch is my favorite PKD novel . . . If you want a scathing indictment of Hollywood you might dip into Christopher Booker's The Seven Basic Plots (2005). Anyway, one of the beauties of a PKD novel is the interior monologues; and film, as Tom Wolfe correctly points out, just can't do that.

I suppose it's possible.

This screenplay seems to have been considered so many times, that it may require an alternate reality and a spray can of mind altering to make it come true, but I'll certainly line up for a ticket.

Will there be a line? There was a spate of movies following BLADE RUNNER (following Dick's death--ultimate irony...he didn't profit from this success), but he still has a niche audience, and I fear SCANNER DARKLY wouldn't encourage folks to join the niche.

But I WILL BE THERE!