In Defense of Art 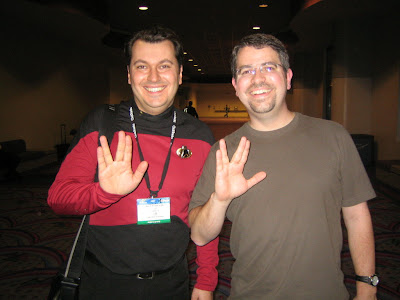 As you probably already know the Internet can be a very frustrating place. On the average day, after reading about how teachers unions are destroying the foundation of America, I try to cruise io9.com and see what's up with our SF community. A couple days ago, io9 posted the trailer for John Simon's adaptation of Radio Free Albemuth, and, well, believe it or not, commenters said some stupid stuff. Among the complaints:

"No one can complain about the production values in the upcoming Atlas Shrugged release after seeing this...."

"This looks like something the guys in IT threw together on their lunch breaks."

"Is this from the SyFy channel? I keep expecting a Dogosaurs or Pigeonraptor to swoop in an kill indiscriminately."

I will now address these concerns specifically. Dear Geeks, Radio Free Albemuth is an independent film done on the cheap so as to avoid the most common Hollywood pitfalls. You know, like when they take a PKD book and slice the science fiction idea out of it, and then get some guy like Tom Cruise to play a protagonist that has only a name in common with Dick's original. Gone are all the characters, the layers of doubt and resolve, the depth of vision, and in their place is a long scene during which the audience worries that Tom Cruise may drink THE MILK THAT'S ALREADY GONE BAD!!!1! Remember, Phil Dick said his stories don't just ask 'what if?' - they ask "MY GOD! What if?!" I mean, that milk looked really gross, but WTF?

Just today as we are hearing reports about a Total Recall remake, and Blade Runner prequels, sequels, and mini-series, you people have the gall to pan a movie that dares to be slightly original? Guys, you're ruining it for the rest of us, those of us that want to see people take Dick's literary vision in new and interesting directions. I mean you guys are right: this doesn't look like a slick Hollywood production, but how have those worked out for you? Can you even remember the name of the main character in Paycheck or Next (no the answer is not Ben Affleck and Nic Cage)?

Remember the Washington Post article from last week? The one that said this:

"Dick's fiction also is highly regarded because it tends to avoid the typical elements found in Hollywood science fiction - alien invasions, battles in outer space, time travel, etc. - and is more character-driven, featuring a small group of people in confined settings and environments."

And yet, with the notable exceptions of Blade Runner and A Scanner Darkly, the typical adaption of Dick's work avoids characterization like the plague, instead we get an extended chase scene.

I guess I can't really fault the commenters over at io9. I don't really think they're Dick fans per se; they get pretty turned on by special effects and the like over at that site. But I know my readers and Dick's fans in general will give this film a chance. Please. PLEASE!Head over to that comments section and let these guys know they just don't know.. Help reawaken my trust in the Internet...

Fanboys are a lower life-form, determined to be contrary to everything, but not possessing the full character and strength of the rebel. They are not unlike a lichen which grows on the northeastern side of a tree and thinks it is facing south.

We'll see how long it takes to get a comment approved over there.

Although, is shallow criticism really worth getting upset about? There will always be haters, and unfortunately they're usually louder than the rest of us.

Amen Brother! I've been waiting to read this post a long time, and feel that I should have written a similar one myself--but now need not.

It's a pity one cannot make a study of the age spread (chronological and mental) amongst people who leave comments on web sites. As for myself, I seldom read them, unless I want to laugh at the darkness.

I'll leave a few, though.

Well put! What a breath of the proverbial fresh air it is to read such commentary; perhaps we are not all doomed, and insightful people still exist. The trailer reminded me of the "production values" (again, such as they were) for the film version of the great book Dick never wrote (LeGuin's Lathe of Heaven). What I remember is not the "ScyFy channel effects - though I suppose they were good for their day, but the *story*). Such an obvious point which is incredibly almost always missed by the pundit/critics in Hollywood.

So almost 2 days later and the moderator on io9 hasn't posted my comment. I tried, but it looks like the game is fixed.

I really didn't think Radio Free Albemuth was that great. The CGI was shithouse and made VALIS look like a mid-90's CD-ROM game. If you're going to do lowbudget make a film like Primer. Don't do a lowbudget attempt at a highbudget film.

PKD's Radio Free Albemuth book is great because it is described with the utter passion of a madman consumed by a vision. The film, in contrast, is tempered, slow, and sane. It takes all the life out of the story. The whole production was very well-intentioned but it just wasn't that good.

On the other PKD scholar Gabriel Mckee gave high praise to the special effects of Radio Free Albemuth in his review of the movie:

"The film uses an awful lot of computer effects for a movie without a car chase, and those effects pay off-- they are an otherworldly intrusion, just like the alien-divine messages they represent. There's a slightly different look to each dream, including a couple fully-animated sequences. Some are extremely polished; others are deliberately more sketchy, but there's a powerful aesthetic driving all of these sequences. It's clear that a lot of thought went into the look of Brady's visions, which are, after all, the backbone of this story."

McKee calls Radio Free Albemuth "A labor of love. Definitely worth seeking out."

For his full review: http://sfgospel.typepad.com/sf_gospel/2010/10/radio-free-albemuth-the-politics-of-mystical-experience.html