The Adjustment Bureau: The Reviews Are In! 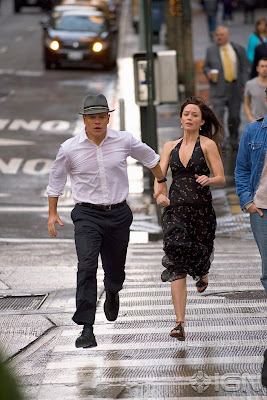 I should have anticipated the PKD media frenzy that accompanies a major cinematic adaptation of his work. I've written about the short story the film is based on, "The Adjustment Team," previously here. After all, this blog weathered the Next typhoon, but I was younger and hungrier, and somehow withstood the withering onslaught. The combination of film reviews and articles summarizing Philip K Dick's life and work, as well as 'Hollywood's Obsession with Philip K Dick' are arriving fast and furious, too fast, in fact, to keep up with. Any serious Dick-head knows about these 'Philip K Dick Article Machine' articles, specifically that these articles barely scratch the surface of PKD's strange life and career. Rather than ponder the paper-thin commentary that is the stock and trade of American journalism today, let's get into the reviews.

The first review of The Adjustment Bureau I read was from io9.com who did not inspire great confidence:

"'That Philip K. Dick guy is pretty good. But what would really make his work awesome is if it was turned into a romantic dramedy.'

If you've ever said those words, or something along those lines, then you — and only you — are the target audience for The Adjustment Bureau, the new movie opening today."

I found my spirits buoyed, however, by this review at The Palm Tree Garden:

"It’s not easy adapting Philip K. Dick, but George Nolfi, who wrote and directed, pulled it off. This is no mere matter of having serendipitous casting and competent post-production help. Not with Philip K. Dick. With Philip K. Dick, it is the story that counts, not the special effects, the excellent Blade Runner notwithstanding. But The Adjustment Bureau is no Paycheck, which starred Mr. Damon’s friend, Ben Affleck, and co-starred Uma Thurman as his love interest. Again, I’m disqualified. I’m one of the few people who actually thought Paycheck wasn’t all that bad. But Paycheck is a two and a half star where Bureau is, oh, at least four and a half."

"So Adjustment Bureau wasn't bad, but it was given the same "action/love story" treatment that was done to Paycheck. They actually added more vague religious suggestions, which is nice and Dickian. It's worth a watch, with no real surprises."

Things are looking up!

The bottom line seems to be that if you can handle the fore-fronting of a love story in a PKD movie you may like this. My local reviewer in the SF Gate had this to say:

""The Adjustment Bureau" can be praised as an action movie and as an imaginative fantasy, but the main thing that keeps audiences glued throughout its running time is that it's a love story, easily one of the best American love stories of the past year.

In retrospect, it almost feels like a miracle: "The Adjustment Bureau" gets an audience caring intently and personally whether two people will get together, and it does this with a single five-minute conversation. A failed senatorial candidate, rehearsing his concession speech, meets a woman and they talk. Their ease, their immediate interest, their amusement and instantaneous delight in each other's company are so apparent that we know we're witnessing one of those things. That is, the kind of connection that feels so natural that you think it should happen every day but instead happens just once or twice in a lifetime."

So, until I see this movie sometime in the next couple days I can only speculate, but this sounds like a pretty good date movie.

The release of The Adjustment Bureau also spawned several articles that survey the PKD adaptations that have already hit the market.

Quiet Earth grades every adaptation here with this caveat:

"I've put the films in order of my own personal preference. Obviously many of you will probably disagree with my order, but I think because I tend to enjoy Dick's earlier writing which tends to lean towards high concept, fast paced scifi weirdness I tend to go for the more hard scifi, or action oriented films."

As I try to explain to my students, grading is very often a subjective enterprise, and obviously there is room for debate here.

I really liked this article on io0.com, The Ten Greatest Philip K Dick Stories Hollywood Hasn't Filmed Yet, primarily because it suggests some fairly obscure short stories and under-appreciated novels (The Crack in Space!).

I'll leave you here on that upbeat note. As I say, I hope to see it in the next couple of days and will post a review.

Oh, I almost forgot this review - which I also really like. Money paragraph:

"So, despite the dark and visionary sci-fi pedigree behind the source material and a $50 million budget, is this just a glorified update of It's a Wonderful Life

? After all, wasn’t Clarence the Angel a sort of a benevolent “adjustor”, a case worker assigned by the “boss” to nudge Jimmy Stewart back onto his Pre-Ordained Path? Although the “G” word is never mentioned in Nolfi’s film, it’s pretty clear that the “Chairman” represents You-Know-Who (although every time the Chairman was mentioned, I kept visualizing Ralph Richardson’s marvelously droll Supreme Being in Terry Gilliam’s Time Bandits

Please post links to additional reviews in the comments section. I can't keep up!

I've not read the short story that this film is based on yet, but I was kind of put-off when I first saw that the movie was going to have a romantic/love story theme to it, as this doesn't really fit with the general feel and style of Dick's works that I've read.

That said, "Now Wait for Last Year" is perhaps my favorite Dick novel, and the really impacting stuff from that book is the relationship/love angle. So, I guess it could be done well, though it may just be shoehorned into a tale that doesn't need it.

I am guessing that the Talking Dog did not make it into the movie...

No Summoners, unfortunately. But the concept of that scene did make it in.

Roger Ebert gave it a decent review (3/4 stars) : http://rogerebert.suntimes.com/apps/pbcs.dll/article?AID=/20110302/REVIEWS/110309994/-1/RSS
On the other hand I read an IGN review that said it wasn't as "intellectually stimulating" as Minority Report. 'Nuff said.

Actually, I also don't think PAYCHECK was all that bad. Given the purely potboiler nature (and quality) of many of Dick's early short stories, PAYCHECK certainly can be said to be at least as good as many of those.

In fact, the only Dick adaptation I didn't bother to see was NEXT, as it looked simply too dreary to bother with, (and RADIO FREE ALBEMUTH, which I badly want to see and missed when it played the Tribeca Film Festival because I left my office at 6:00 pm and went home, not knowing the single NYC showing of the film was taking place at 7:30 pm at a theater only a few blocks from my office...Aaarrrgh!!).

I can't honestly say I didn't enjoy any of them...they were all at least entertaining, and most actually better than we had a reason to expect. I mean...SCREAMERS? The original story was slight, to say the least, so who could have expected it to be possibly the best of the minor Dick adaptations?

I will see THE ADJUSTMENT BUREAU this weekend, barring any unexpected impediment, like, uh, my own schedule being adjusted behind the scenes to keep me from seeing the film.

What? Another one mentioning It's A Wonderful Life in connection to Dick? If this is madness, David, it's spreading quite fast.

Maybe they should film The Cosmic Puppets. Possibly in black & white. The skeptics would surrend.

I've got to say that even the "good" Dick movie adaptations have not met my somewhat random and inconsistent standards. That said, Adjustment Bureau, despite the significant shift in focus, has been my favorite BY FAR. Enjoyable movie.

With the obvious exception of Blade Runner.

'He wasn’t the greatest writer of prose, but he was an idea factory. The drawback here is that his characters were often under-developed and his themes repetitive. This doesn’t always make for the most rounded or thoughtful science fiction movies.'

The first thing I can say is that The Adjustemente Bureau is a rare film. It starts as a thriller about an aspiring U.S. senator, only to be a courageous commitment to science fiction, when in reality it is a love story. A fantastic modern reissue requited love, but impossible to divine.
When production starts to become a science fiction story is a bit messy and a bit mislead some characters, but once you become more or less with the leitmotif of the hat brigade, tension arises an intense thriller.
The final resolution is a little bluff, a little fairy tale, a little Disney

An entertaining, unforseeable movie but something dense ultimately. It finishes almost without time, they do not give many answers.

Ariplan, did Dick's book give a lot of answers? Is it a problem that there's some ambiguity? Please elaborate.

A good movie. Unforseeable. With many action. 7.5