An Obscure Interview With PKD 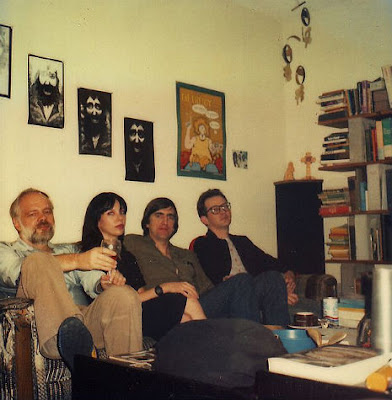 My Facebook friend Henry Baum hepped me to this interview from Slash Magazine 1980. Check out that photo! (I may have posted it here before, who knows?). There's A LOT of talent on that couch. It's like a tiny slice of the 80s cultural revolution on one couch. Anyway, this interview is so awesome. It's got something for everyone: PKD calls himself 'a religious anarchist'; K W Jeter is a total badass and this interview makes me sad that he hasn't gotten nearly his due... yet; Gary Panter is a badass who came up with his Rozz-tox manifesto - which is also rad - and you all know the shirt... (that's the shirt PKD was wearing when he had his stroke... btw); we learn that a 'conapt' is a condominium style situation where the tenant co-owns the building (more on this in a second); and we see the dead cat as refutation of God which figures so prominently in VALIS. I love that Dick says 'effete intellectuals' and if he had said it in my presence I can guarantee you orange soda would come out of my nose I'd be laughing so hard. Also, PKD's political thoughts are surprising... If you don't read the entire interview here, well, I can't help you.

I like the idea that the characters in Dick's books are owners rather than renters. That fact alone locks them into a society in a much more intense way, one of the many reasons I'm shying away from home ownership even as the prices fall. So refreshing to see something new, though Patrick Clark informs me this interview has been known to Dick-heads for many moons and was reprinted in Simulacrum Meltdown # 3 (October 2001).

Special thanks to Henry Baum!

Wow, when I was looking for a picture of the shirt, I found this article about PKD, looks long...
Posted by Ragle Gumm at 5:37 PM

Shriek! Thanks very much for this.

Patrick Clark is quite correct, as usual when it comes to PKD ephemera, such as "obscure" interviews. And us so-called old timer "dickheads" well know that most of this stuff was available at one time on the ORIGINAL philipkdickfans.com website, so capably started and run by Jason Koornick, who is someone else that doesn't get proper credit.

As it happens, I bought that issue of SLASH magazine when it came out...the only issue of the mag I ever saw during its lifetime, the only one (consequently) I ever bought, and (I think) the last issue they published.

Although I was a Philip K. Dick fan at the time, I don't recall that I knew there was an interview with Phil inside when I bought it. That was serendipity. I was also a fanatic fan of the whole "punk" (for want of a better term) scene of the time and I bought any music periodical that I could find related to such music. Years later, visiting my folks in Florida, my dad asked me to clean out my old bedroom closet, which was stacked with boxes of those old music mags. I threw out virtually all of them...but I kept the issue of SLASH magazine, and it still sits in a drawer in my old bedroom in Florida.

I found this interesting:

SLASH: The kids that trash the white House would probably be a bunch of dub shits out for a yuk. Is that a scary prospect?

DICK: Not for me it’s not! I can’t imagine how they could be more dangerous then the people that are there now.


I wonder how he'd feel about Anonymous and all the other ilk that gets lumped with them... They aren't looking to take over though.

Just found that interview today before I saw this blog entry (I got a google-search on PKD that found some blog entry in the "American Conservative Magazine" - is that what it sounds like??) and while the interview is a must read, I so much like the pictures (there is another one here related to the story: http://www.theamericanbookofthedead.com/2011/04/19/philip-k-dick-and-the-germs/ - hope I can post this here). - Did you notice that there are so few pictures of PKD? I "suck in" (excuse my English) every single one of them... there are so few of them.