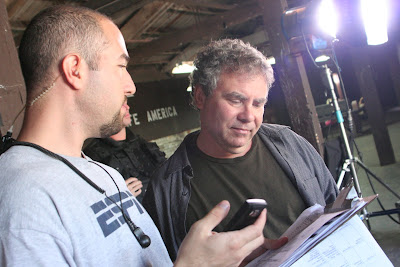 I got word a few days ago that Radio Free Albemuth won the Grand Prize - Special Jury Award for Science Fiction at The WorldFest Houston International Film Festival (boy, that's a lot of nouns!). Congratulations to John Alan Simon (pictured above doing director stuff) who has been working tirelessly for years on this project! It really is a great film with a hell of a script and a ton of heart.

Those of you in the Dallas area will have the opportunity to see RFA next Friday April 29 at the Angelika Film Center. Have you 'liked' the film on Facebook? Have you ever seen Swimming with Sharks? Hollywood strikes me as a brutal place, and here's John Simon carrying this movie, this great piece of art, like a flickering flame in the wind. It's a Dickian, not to mention Herculean, struggle. Nice to see the film get some recognition. I really hope it gets a broader release soon.
Posted by Ragle Gumm at 9:29 PM