The Desperate Recreation of Place 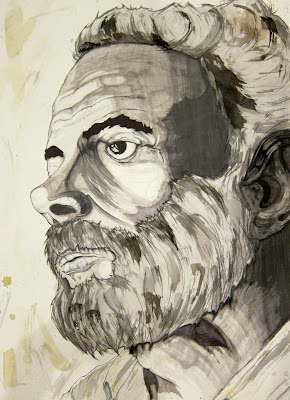 Above: Portrait of PKD by "Objective"
I have discovered what I believe to be a genuine insight into PKD's work in Frederic Jameson's essay "History and Salvation in Philip K Dick." It's not something he spends a lot of time on, and he provides scant examples, but he's onto something, writing:

"Yet something more than the standard psychology (or psychopathology) of the collector seems at stake here: for objects would seem to set in place what Kenneth Burke might have called the category of the 'scene' as such: places lovingly devised and composed for a human activity which has disappeared, as living hosts disappear in course of the generational process, leaving their empty shells and housing behind them. Collecting in this sense then suggests a desperate repetition, which, by reconstructing the scene, struggles to restore the human acts and interpersonal events it once housed. But such an analysis immediately clarifies our earlier thematic material as well, for the [Perky Pat] layout is just such a scene, and fusion with Mercer in some sense replaces the novelty of fresh action and eventfulness with a kind of eternal return of the televisual image. In this particular semic cluster, then, a historically marked object-world joins hands with the phenomenon of 1950s media to make up the space and category of empty scene as such; and this is something like a pure form, which can be inflected in either a negative or a positive way, and accommodate either malign or redemptive content" (372).

There are tons of examples of this: Wash-35, Perky Pat layouts, Christ, the whole town of Millgate in The Cosmic Puppets. I'm rereading Ubik and just the weird way they bring the half-lifers in this weird routine/ritual seems to fit. List some more in comments please.

One interesting thing about this motif is that it mirrors the act of creating fiction. An author toils in isolation in hopes of connecting with some other person. Fiction uses language, inanimate words on the page, to affect change and spur action in our larger reality. The construction of wholly artificial worlds in hopes of sparking something real in a reader seems roughly akin to these Potemkin-villages that exist to evoke authenticity among the people that commune with them.

But likewise, the motif suggests a rough allegory in our late capitalist existence, in which nostalgia and kitsch are used to conjure feelings of patriotism, loyalty, and a perverse desire for stuff. Our nostalgia is exploited for profit, and as a result, the objects of our nostalgia are tainted. Seems like so much of Dick's work revolves around again making sacred what we made profane through sale and commodification .
Posted by Ragle Gumm at 11:18 AM

I can't think of another example of such an instance in Dick's work for the moment but I just wanted to thank TDH for bringing Jameson's book to my attention. The first passage posted was perhaps unneccessarily dense and, at times, far-fetched in its arguments but any fears of Archaelogies of the Future being another Rickels were disspelled pretty quickly after I got the book out of my library. Aside from the three chapters devoted to Dick (including a nice In Memoriam) there is a lot of interesting insight to a variety of sci-fi. So far, I've particularly enjoyed a section on Stanislaw Lem and his great novel, Solaris.

Speaking of collecting and the commodification of my interests, have you heard any updates about the publication of the EXEGESIS? Nary a press release from Houghton Mifflin in the past year! I'm getting suspicious that it ain't happening.

Well, there could be some overlap with a more general simulacra idea here, or a literalization of the symbolic, but Heldscalla in Galactic Pot-Healer seems to fit to some degree; the resurrection of an entire religion - its gods, the structure of conflict - by reinstating the physical structure to use. And it's not a perfect fit, but the "cold-pak" environment in Divine Invasion, though only intended to occupy the individual's time, is actually a variable experience; the bleed-through of music changes the experience. In Maze of Death, the experience is meant to be variable, but not a re-creation of a known setting.

"again making sacred". I doubt I've thought of it quite in that term with all its implications but you do seem to be on to an important element in his writing that has been part of PKD's appeal to me.

I can think of two examples. One, in Now Wait for Last Year where a a super rich collector lovingly recreates the Washington, DC of his youth (on Mars) and does so with an army of collectors purchasing period antiques. In Man in the High Castle Americana both authentic and authentically forged is collected. The converse of the collected is kipple -- industrially mass-produced artifacts of culture -- PKD redeems kipple over and over again, revealing the inherently spiritual in the castaway -- usually through some new act of creativity, e.g. the creation of sentient robotic creatures out of shopping carts (again in Now Wait for Last Year) or Fink's jewelery at the end of Man in the High Castle. (Kipple puts me in mind the verse in Psalms, "The castaway stone shall become the foundation stone" (Psalm 118:22).