Orthogonal Weekly Round Up 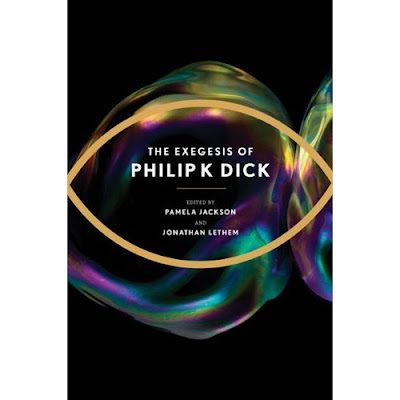 Too big to be just a weekly wrap-up, what you are about to encounter is an orthogonal week's worth of Internet PKD stuffery.

First off, check out the pic above. My guess is that that's the cover for the first volume of Exegesis excerpts due out November 11, 2011. I can't say a whole lot right now on this subject, but I am involved with this, actively working on it this week, and it's going to be really cool. You can pre-order the book already on Amazon.

Second, well this sounds like self-promotion, but I did an interview for a zine called Reglar Wiglar (turbo attaboy to anyone who can identify the reference of the zine's title) with an old friend and solid Dick-head, Nick Sondy, about being a scholarly Dick-head and the blog and stuff, a weird experience since it was an actual phone interview (with a guy I've shot the shit with for two decades) and then they transcribed the whole thing. Weird to see what you sound like just talking, which apparently is how Frederic Jameson composes his essays. But I got some good lines in, including this one:

I think it's a pretty good interview. I know Nick really well and we can talk about stuff like this for hours so I was comfortable. We mostly talk about Do Androids Dream of Electric Sheep? and Blade Runner. Read the whole thing here.

Speaking of interviews, here's yet another with director John Simon talking about Radio Free Albemuth. I know he needs to keep the movie's name out there. I also know that the economy has taken its toll on the indie film biz. Instead of asking when we'll get a chance to see this in theaters, you must first like the film on facebook, and tell all of your friends to do the same. We need to help make this happen. Ask not what Radio Free Albemuth can do for you, and so forth.

Tessa Dick has published a memoir, now available on Amazon. If enough of you order it through this blog I may earn enough Amazon credit to get a copy for myself.

Regular reader Jacen Kemp has a new blog, The Clockworm, devoted to Psychological SF Esoterica. I'm especially taken with this post about PKD.

Last but not least, I'm re-reading Ubik in the short break between grading and summer school and hope we can have some discussion about it in the coming weeks. Stay tuned!
Posted by Ragle Gumm at 12:12 PM

A small swarm of Dick-heads has been diverted into my weird stream of consciousness. I tip my hat to you, sir.

Do you know if the 1056 pages listed on Amazon are for the first volume alone, or for the expected total pagination of all (both?) volumes? Thanks. Been working my way through IN PURSUIT OF VALIS recently, which comes in under 300 pages but is still incredibly dense going. Yowzers!

The 1000 pages is both volumes. Which is actually going to be one book. The two-volume idea has been left by the wayside.