Some Thoughts On Ubik 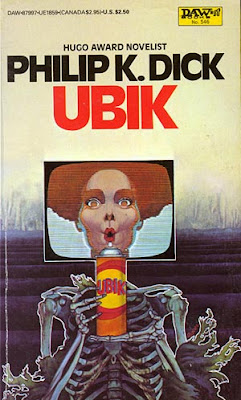 So I just finished Ubik. I hate to say this, but I think it's been more than a decade since I read it last. I remember reading it when I lived in Hawaii in the mid-90s. It was probably one of the first five PKD novels I read. I know I've tried to re-read it a few times, but I couldn't ever get through the first 90 pages, which are a little slow going. Well, don't I feel stupid. As those of you who have read it recently will attest, it's a tour de force. I mean I knew the plot and everything, but what a fun book to read. I don't have time to make this very long, but I wanted to get some thoughts out before returning to my work on the e (as those of us working on it have come to refer to it).

I have always referred to Ubik, the substance, as the 'anti-kipple' - that is to say its effect is restorative; it counteracts entropy. I still think that's right on, but we can get more specific. If kipple pulls towards chaos and disorder and death, Ubik is redemptive; its energies have religious overtones rather than the physical laws that seem at play with kipple. That is another way in which Ubik is the opposite of kipple. Ubik is the antidote.

PKD wrote Do Androids Dream of Electric Sheep? and Ubik, back to back, in 1966. They are very much connected. But Ubik marks an even larger shift in Dick's writing. In the middle of chapter eight the characters zero in on the forces at work:

"You know what? I think these processes are going in opposite directions. One is a going-away, so to speak. A going-out-of-existence. That's process one. The second process is a coming-into-existence. But of something that's never existed before."

It's this process of redemption that becomes the focus of Dick's writing after authoring Ubik. Those of you that have read earlier Exegesis excerpts in In Pursuit of VALIS already know this is one of the central themes in the e.

Here are some discussion question to answer in the comments section:

Why is everything coin operated?

Dick spends significant time describing characters' crazy wardrobes. Is there some point to this?

Is it significant that Ubik arises seemingly out of the vapid and mundane world of advertisements?

Over the next week I will endeavor to explore the academic work that has been written about Ubik so that we can bring that to bare one our examination of the text. The novel is a central preoccupation of PKD's in the Exegesis, so more research is necessary.

In a letter to someone (can anyone help with the citation?) Dick speculates that instead of titling the book Ubik by Philip K Dick, it could be titled, Philip K Dick by Ubik. Interestingly, it was this idea that inspired Pamela Jackson's doctoral dissertation at UC Berkeley, and she's the main editor on the current project, so this all works out well. Let's not forget Jonathan Lethem has a Ubik tattoo. Ubik is everywhere. 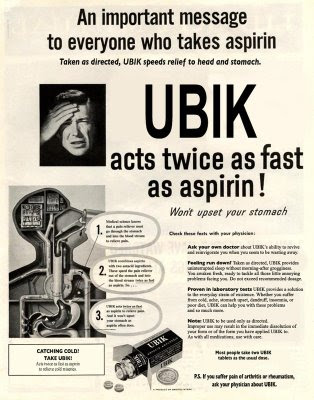 I think the fantastic garments worn by the characters in UBIK are simply a whimsy of Dick's and have no larger meaning.

That everything is coin-operated is a reflection of the times in which Dick wrote and had grown up, where so many things had been "monetized" (to use a contemporary term) by making them coin-operated. (I can still remember chairs in Greyhound bus stations that had built in coin-operated televisions, so one could watch tv while waiting for a bus, for the price of a few coins per alloted span of time.) And then of course there were coin-operated bathroom stalls in bus stations and other such public places.

Dick could not fail to observe the nature of the American capitalist system and its ingenuity in finding a way to place a price on and extract payment for virtually anything.

If he were writing the same story today, he probably would replace the coin-operation mechanisms with debit-card devices.

I read that Tessa Dick said Ubik was supposed to be god, but it seems to me Ubik fits more closely the role of sacrament. Runciter is god, Jory is the Gnostic false or blind deity (I think a lot about Ubik relates to PKD's interest in Gnosticism). Runciter predicts VALIS here, projecting into our holographic reality with clues from the "real" world.

I always saw the clothing as just Dick's way of playing with the silliness of SF tropes, which I see in a lot of his work.

I see the Ubik in ads/coin operation as being two sides of the same coin, an expression of that dichotomy between the sacredness of trash (advertisement not having "value") and the Black Iron Prison, which looks more advanced and developed but is oppressive. It's one of many times the BIP role is connected to money.

I overlooked your question about UBIK arising from the vapid world of advertising.

Again, Dick was writing about a fallen world, where the sacred has been lost among the profane, and where the profane is referred to as if it were sacred. Every ad promises to change your life--for the better, of course--to remove the hideous blemishes and bodily smells that drive people away from you, to transform you from the skinny nebbish or fat slob into the svelte or fit god or goddess that you must become if you are to have even the hope to be accepted into the fellowship of happy humanity.

Dick surely saw the ironical nature of advertising language inflating quack cures into life-changing necessities, but he also saw that in our profane world people seek salvation not in sacred temples and churches but in the trash that floods our physical and mental environment. Dick saw that, if a true savior were to arrive, he--or it--would be announced not from on high, but in the pulp back pages of comic books, detective magazines, and women's true confessions periodicals.

Salvation would be presented to us via a medium with a mass audience and in a form we could understand and would accept.

The coin-op world is Dick's vision of the future where you can literally get nickeled and dimed to death because you are trapped at home. Otherwise it is an excuse to have coins in the plot, which mark the time periods. The wacky dressing was a logical extension of the future direction of fashion. Dick might have also intended to use that to mark the time periods (but anything in the past would have been subtle by comparison, so it's more of a running joke). Whatever Ubik is, it would be sold by people as a product (just like the after-half-life--you need a machine for that), thus the advertising.

In 1966 and thereabouts, there was talk of television being coin operated. The image of a coin operated television was even used as counter-propaganda by broadcasters as a warning that pay tv (nascent cable tv) would spell the doom of free tv.
I think also, Dick's poverty might have had him feeling 'nickled and dimed' most of the time (note books that had creditor blimps hassling the debt-ridden), but I'm not a Dick scholar.
Also, as far as the vapid commercialization aspect of UBIK, this was the golden age of American marketing on TV, that era romanticized by Mad Men, etc...
You had comedy records by the likes of Stan Freberg in this time satirizing the vapidity of the advertising industry and America's commodious values.
We live in that world now, where we've internalized the values of commercialism and consumer fetishism and even use ad-speak to talk about human virtues or situations ("he really up-graded on his new girlfriend", etc.), so we're not as aware of it now, just as a fish isn't aware of the water. But in 1966, the pot was just beginning to boil and people thought the new way of digging into people's psyche in order to compel them to buy was relatively new and was just beginning to chaff conscious folks.

Also, I used to find the descriptions of the character's wardrobe so over the top that I had difficulty getting into the story. I too didn't understand why he wrote it, unless he was lampooning some of the silly fashions that were going around in 1966; loud colors, paper dresses, some hipper, probably pre-hippy fashions for men, etc... He was clearly having fun with these bits and probably thought it would be funny to extrapolate some of these styles into the future and make them more extreme.

Hello, I'm from Argentina. I've just finish Ubik and i think it's one of the best books that i've read in my whole life.

I admire PKD but I just read four novels (All of them in spanish):

- The Man in the high Castle
- Simulacra
- Do the androids dream of Electric Sheeps?
- Ubik

Also i've read a few short stories. I writing because i want to you know that in Argentina there are prides Dick-heads.

I'm sorry if i have mistakes on the writing.

Going along with Robert Cook's line of reasoning in the second comment, that Ubik doesn't arise from the vapidity of the advertisement netherworld so much as infiltrate from a remote point without and then relay to the characters through this medium is - I think, for now - the significance. It is ubiquity finding its path of least resistance, that is, at least in Joe Chip's world (which is ours too), the all-pervasive Ad.

I can't help but think back now to a segment from Solar Lottery when Dick had a "precog" moment with his treatment of TV commercials. "...glorious ads played back and forth like liquid fire. One after another they rose, hung for an instant, then dropped away...Ads were the highest art-form; the finest creative talent was at work behind them."

Though a far sight removed from the voice-in-a-tin-can late night radio huckster I hear in my head when I read the Ubik blurbs, to Dick, I can imagine they were coming from the same place.

I'm inclined to view Dick's use of a coin-op scenario from a pragmatic writer's perspective, that is, a pet idea he had on reserve waiting for a plot with which it could have an interplay. That the ending went down the way it did (Runciter finding a Joe Chip 50 cent piece) was, maybe, the synchronicity of a writer going with the flow of his own speculation and finding its terminus and, again this is only a hunch, not planned from the beginning at all.

As for the clothes, you got me.