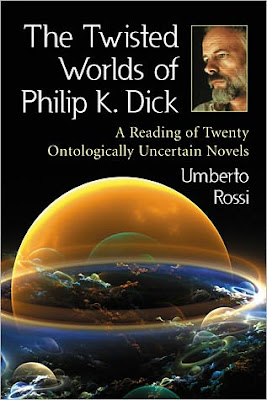 It was great to read a serious investigation of The Cosmic Puppets as this early novel of Dick's often gets short shrift. Umberto runs through the Jungian, Marxist, and religious readings of the book, developing an absolutely brilliant connection to It's A Wonderful Life and displaying for us the literary pyrotechnics Dick shoehorned into one of his earliest novels.

My reading of Umberto's plan in the book was overly simple. Rather than positing that ontological uncertainty is a product solely of Dick's tendency to dance back and forth between object and subjective value systems, Rossi catalogs the various sources of ontological uncertainty: schizophrenia, amnesia, implanted memories et al.

I'm noticing that these academic books often sell literary criticism as and end in and of itself. This is, of course, an illusion as the article or book of criticism usually results in remuneration of the critic or a similar rise in stature. So there is a hidden end toward which the critic is working. But seriously, these books on criticism skip over entirely the point of criticism, which, when you think about it, is kind of amazing. In this regard, Alain DeBotton's How Proust Can Change Your Life stands heads and shoulders above other books which purport to explore an author's oeuvre.

Do you want to know why I think PKD's work is important? Because I think his writing has the power to help us be better people undertaking difficult task of living in the 21st century. The payoff for reading Dick's books isn't some dorm-room 'aha-moment' of grokking exactly how bizarre the world is when you're stoned. Although that's what initially drew me to his work. The payoff is the realization that reality is subjective and plastic, and that changing your reality is as easy as changing your mindset. This is how most of Dick's characters ultimately make their peace with the world. Once you can learn to see a problem as a blessing, or at least a challenge, you've got it made in the shade. Well, at least it's made my life easier.

The fact that you can see the cosmic forces battling outside Millgate in The Cosmic Puppets as Freud's Eros and Thanatos or Zoroastrianism's dueling Ahriman and Ormazd is far less important than the subtler way the protagonist Ted Barton revitalizes his own life by returning Millgate to the interconnected community he remembers, from than the Pottersville-like malevolence of the town's more sinister incarnation.

I'm not slamming Umberto's book, just coming to realize what I see as missing from criticism in general.

How Proust Can Change Your Life

I'm with you on how Phil's people ultimately deal with their precarious situations. Sometimes... you just have to make do.

Yea, I wish lit-crit was more OK with what it really is: intellectually-oriented, context-based fandom. There's nothing wrong with writing about something because you love it- not to explain it away and bestow some ultimate identity upon it, but to more fully appreciate its nuance. (nothing about Umberto here either, I haven't read his book yet)

I have long been banging my drum for 'Cosmic Puppets' - I think it's a great book. In a surprising way it sets out Phil's stall very early on - with the themes that would dominate his life's work. In particular there's a moment when the protagonist is shown a ball of string and is told that it is really the tyre iron which once struck a man. Dick makes us see the two objects at once - and we realise that reality is in the habit of concealing itself. I don't have time right now for a proper critique - and I also look forward to purchasing Umberto's book.

I'm about to read this book myself - I read the sample on Amazon and it seems pretty solid so far...

I really liked what you wrote about PKD's characters making their peace with the world. I have always felt that his characters sort of give up in the last chapter ("Voices from the street" is perhaps the best example of this).

I like the angle you are proposing. His characters can't change the world but they can change their mindset to create a new reality more bearable. Very interesting.

My basic idea of literary criticism is that you open inroads into a book; like mountaineers who trace a new climbing route. I can't tell other readers to climb the mountain that way; I can only tell them that one can go through that route, and what you get from that is basically what you get from it. I can highlight some aspects of the text that are not evident--like showing future climbers that if you go that way there are some difficulties but you may discover a wholly different face of the mountain; show you that you can reach that point and from there things have a different aspect, and you may reach this or that peak that were thought inaccessible. Surely what I am doing is NOT explaining Dick away (there is still so much to say about him and his fiction), or bestowing any identity (maybe suggesting that by climbing the Dick mountain along a different route you may ultimately realize that there is more to him and his books than you used to think; that there are more sides or faces of the matter, let's say). I don't see my book as simplifying Dick, but as a work of cartography; pioneer stuff for future and more gifted climbers.

You can get the same "change your mind, change your reality" message from mountains of "positive thinking," self-help books.