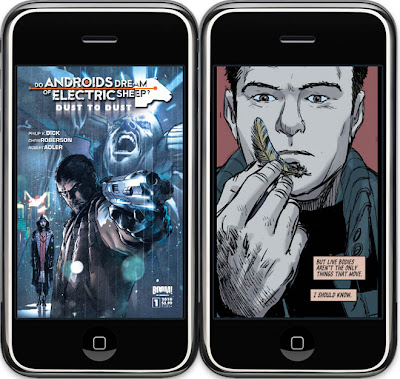 Just starting to see my schedule clear up now that summer school is over. Time to finish the band's second album, review Umberto's book, write some fiction, and score a film. Wait, what was I saying about having a clear schedule? Regardless, here are two pieces of Dick-head video, grist for the mill.

The first is the long-lost and much storied French TV special with PKD spinning in the teacups with Norman Spinrad and others. Ever since reading about this in the letters I've been wanting to see it, and now French Dick-head Etienne Barillier has located and posted the video along with the translation and some links to Elizabeth Antebi's, the woman who did made the video's website where she tells the story of meeting PKD. Video of PKD is rare and always kind of a mind effer. Here's this guy who as fans we're used to spending time with, but in the strange vacuum-like realm of the white page. There's something strange about seeing this barrel-chested guy posing and talking for the camera. It doesn't help that the video is in French. Apparently PKD's Metz speech was recorded in its entirety; you can see clips in The Penultimate Truth documentary. I think the video of the speech is for sale from the French government's TV channel, but it's pricey. What we need is a fan to track down the video and then we could raise funds and purchase the footage to post on the Intertoobz - I'm dying to do something on Kickstarter. Somebody with less on their plate needs to get on this!

Secondly, there is this piece of video from Alex Jones' show wherein he mentions PKD. The posting of this video is in no way an endorsement of the man's show or views. I worry about anybody that takes this stuff too seriously, but then perhaps I am in cahoots with the DMT elves.

Enjoy! Hopefully I can write some more on Umberto's awesome book soon!
Posted by Ragle Gumm at 1:47 PM

Wow! I'd love to see the French documentary with the obtrusive overdubbed narration/translation stripped from it...not just to hear Dick's comments, but also the other writers featured. What a find! Thanks for linking to it.

Thanks for posting this video. That dude Jones is a wingnut.

Hi, I'd love to see PKD's full speech at Metz! If you want to start a Kickstarter project, I can try and get BoingBoing to promote it (I'm an occasional contributor there).