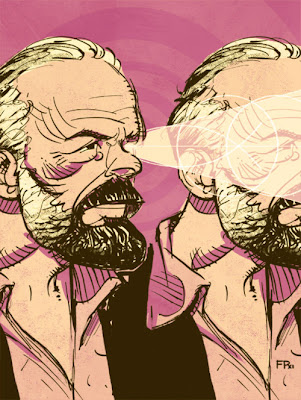 It's been too long, dear readers. This blog has been at the back of my mind, while I've been busy with the first weeks of the Fall semester, getting the band's album done, and working on my own fiction. I dare say, I was feeling a little burned out on PKD, friends! That is, until this morning when I picked up Rickman's To The High Castle, a biography of PKD I haven't read in awhile, and I was struck by all the great info in there. It's a much rawer bio than Sutin's, and it leaves you with a distinct impression of PKD that somehow the Sutin bio flattens a bit. Like any totalizing lens, the stuff about molestation gets old, but again, the interviews, particularly with Vince Lusby, impart a fuller sense of PKD. We really must do something to recognize all of Rickman's many contributions - hopefully at the PKD Conference next year.

So, without further ado (if, in fact, that is ado above which I have already written) let's get to the link round up. Radio Free Albemuth continues to be the big PKD subject the Internetz are tubing about these days, as the film continues to blow minds at festival showings here and abroad.

The Australian Arts Portal tosses another shrimp on the barbie, writing, "What finally distinguishes Radio Free Albemuth from all previous adaptations is that this film has soul, and I am pretty sure that Philip K. Dick would agree. You don’t have to be a fan of Philip K. Dick or science fiction to enjoy this film. Radio Free Albemuth should be mandatory viewing for anyone who is interested in vital, independent cinema. If you get the chance to see it, don’t miss it."

Former Los Angeles Weekly film critic Michael Dare writes: "The lack of chase scenes and pumped-up CGI lunacy is actually one of the charms of the film. It's low budget because this is all it takes to tell the story, which is intellectual, political, musical, and scientific, in fact, everything good science fiction should be. The fact the SyFy channel has degenerated into one cheesy monster flick after another, as though nothing has changed in the science fiction world since Creature from the Black Lagoon, instead of featuring films like this that stretch the human imagination, is just appalling. No wonder they changed their name. They're to science fiction what Sunny Delight is to Orange Juice."

The other big news is RFA won the Best Feature Film at the Renovation Film Fest, following the Hugos a few weeks ago. I talked a big game about going, but, of course, wussed out at the last minute, opting instead to stay home and slave over a short story. Regular reader Mr Hand went, however, and wrote up some short impressions of the film - all of which I agree with.

With all this hoopla we should be seeing RFA in wider circulation soon.

You may have noticed the old Palm Tree Garden website has left the internet realm. While this is a loss, one of the principals has started PKDTV.net - which makes this blog look like a clunky old webpage from the 1990s with all its fancy links and so forth.

There's also this really cool PKD aggregator site. Sorry to keep you in the stone age over here on the Dick-Head folks.

Archives of the old PhilipKDickFans.com site are now available for perusal. Just one glance and it will become clear how much we lost (or almost lost). There's a treasure trove of old stuff waiting to be rediscovered there.

Also, Norman Spinrad has made his essay "The Transmogrification of Philip K Dick" available at scribd.com.

Like I said, I've been hard at work on my band's new album, which you can check out online here.

Just a bit of fair warning. I am still working on the same short story, preparing it for submission (while I have tried to mimic many of PKD's writing strategies, I cannot match his pace), so posting will be a bit light here until I send the story off.
Posted by Ragle Gumm at 11:50 AM

Does anyone have any inside dope as to whether the supposedly pending but never seen second half of Gregg Rickman's PKD biography will ever see publication?

I didn't notice a link to the Renovation interview with RFA's director...

I agree about recognizing Rickman's contributions and on the raw nature of the biography. Would love to see the second half come out.

I'm one of those who see little value in rehashing the reviews of others. Referring to a film (that apparently has not been released in the highly populated hemisphere where I live) without having seen it is a practice as pointless as the right-wing wackos who picket a film they have never seen.

As the curator of AUTONOMIC on Scoop.it, I thank you for including it in your list ;)