The World Sucks, and My Lack of Posting Isn't Helping 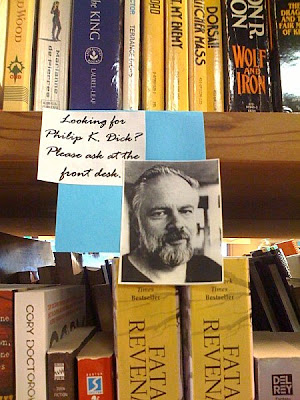 I'm finding it increasingly difficult to find the time to post here. Now I've got a second band, a side-project that I'm involved with, and I've been slaving away late at night working on this story, which if all goes according to plan, should get submitted tomorrow. At that point my attention will turn towards the Philip K Dick Conference planned for next year. Time to get going selling t-shirts, raising funds, maybe even getting a Kickstarter project going. Our list of notable attendees includes: Jonathan Lethem, John Simon (director Radio Free Albemuth), Tommy Pallotta (producer A Scanner Darkly), Erik Davis, Ted Hand, and me. That list is sure to grow as I begin the process of tracking folks down in earnest.

The amazing thing is, while I've been away from this blog, the world has gone full Black Iron Prison:

First, Pat Robertson fails to have even the heart of the robot taxi cab at the end of Now Wait For Last Year, as he recently suggested a husband could leave his wife suffering from Alzheimer's, Nice work, Mr Robertson:

“I know it sounds cruel, but if he’s going to do something, he should divorce her and start all over again, but make sure she has custodial care and somebody looking after her,” Robertson said.

To quote another famous android, "That's the spirit."

But a quote in this article about Amazon seemed to sum up best the way our world now resembles the apathetic futures in PKD's books:

"People who run companies like Amazon operate as though it never occurred to them that it could have been them crawling through the aisles. And the people who run labor unions possess little empathy for how difficult and risky and remarkable it is to build something like Amazon."

And it's starting to really bum me out.

If you've been pining for more Phil Dick content, cursing my name and blog for my seeming indifference, you need to head over to Mr Hand's PKD and Religion blog where our friend has been a very busy little Phil Dick scholar and has all kinds of good posts. Talks are underway to bring Mr Hand's content to us directly here at TDH. So don't give up on us yet.
Posted by Ragle Gumm at 11:27 AM

I am finding very hard as well, these days, not to become overwhelmed by the seemingly unalterable trajectory of this country toward a state of total hopelessness. I just keep sublimating, trying to write good stories and share good things with good people. But man, it's not easy.

You have done so well to post so much over the years. With other interests coming to the fore lately, and the fact that you aren't getting paid for your insights, maybe just trickle a few observations less frequently... suggest a calendar bring up for every 3-4 weeks. Then trudge out of the kitchen across the grass to the little shed to commune with the revelations Phil offers.